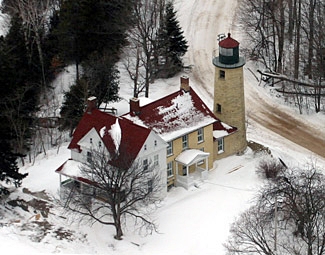 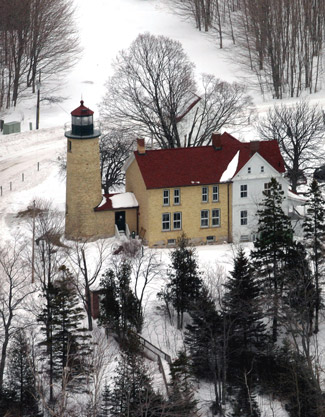 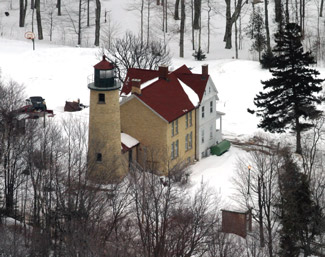 On November 5, 1838, James T. Homans, a Lieutenant in the U.S. Navy, wrote the following to Levi Woodbury, Secretary of the Treasury:

The only points in my district not named for survey and examination, upon which I would report favorably for light-houses, are two: the most necessary of the two is the southern extremity of the island in lake Michigan, known as the Big Beaver. It lies in the direct route of vessels passing from the straits of Michilimackinac to Green bay, and other parts of the northwestern section of Lake Michigan. The loss of property from shipwrecks on the Beaver island has been considerable this season alone, and in value to exceed the cost of building many light-houses and maintaining them. The steamboat De Witt Clinton, in the month of September last, with a full and valuable cargo, struck in the night on a shoal near the Big Beaver, and was obliged to throw overboard nearly $20,000 worth of her lading, including the fixtures for the lantern of the light at Milwaukee, before she could be got off. The disaster to this vessel is ample testimony of the necessity of a light for that point.

Despite Homans compelling recommendation, a lighthouse wasnt built on Beaver Island for more than a decade. In January 1849, Kinsley Bingham, a U.S. Representative for Michigans third district, submitted a petition of citizens of the western lakes, praying for the erection of a light-house on Beaver island. This time, Congress quickly responded, appropriating $5,000 for a lighthouse on September 28, 1850. In March 1851, John McReynolds of Detroit signed a contract with Charles E. Avery, Collector of Customs for the Michilimackinac District, to build a tower and dwelling for $4,480 and to have it completed by October 1, 1851. According to the contract, the lighthouse was to consist of a brick tower and a one-story dwelling, measuring thirty-four by twenty feet. Ten lamps, backed by fifteen-inch reflectors, were used in the towers lighting apparatus that revolved every minute to produce a flashing light, and Henry Van Allen was hired as the lights first keeper.

James Strang had led his Mormon followers to Beaver Island in 1848, and by the time Beaver Island Lighthouse was built, there was open hostility between the Mormons and non-believers on the island. Keeper Van Allen had secreted eighteen nets belonging to a Mormon at the lighthouse, and when twenty-four of Van Allens nets and attached buoys were pulled underwater by a strong current and thought lost, Van Allen offered to return the eighteen nets in exchange for his twenty-four. After the current slackened and Van Allens buoys and nets returned to the lakes surface, the keeper was arrested and subsequently forfeited his bail by fleeing the island.

As nearly all non-believers had left the island, the next two lighthouse keepers were Strangites. After James Strang was assassinated in 1856, most Strangites were expelled from the island, and Patrick Looney, one of the islands original settlers, returned to the island and was subsequently appointed keeper. One of the few Strangites to remain on the island was Harrison Tip Miller, who was appointed keeper in 1863. Tips father followed Brigham Young to Utah after the assassination of Joseph Smith, the Mormon founder, but after losing faith in Young, he relocated to Beaver Island and joined the Strangites. Tip Miller found it hard to provide for his wife and ten children on his keepers salary, so he fished, made barrels, and served as a mail carrier on the side. During the winter, he would haul mail fifty-five miles to Mackinac Island twice each week.

The original tower reportedly toppled over in 1857, prompting the construction of the current forty-six-foot-tall brick tower in 1858. A fourth-order Fresnel lens was employed in the new tower to produce a white flash every ninety seconds at a focal plane of 103 feet above the lake. On April 7, 1866, Congress appropriated $5,800 for a new keepers dwelling, and the present two-story brick dwelling was built later that year.

In 1888, the Lighthouse Board noted that a fog whistle was needed at the lighthouse, and on March 2, 1889, a sundry civil act provided the funds for its construction. A ten-acre site west of the lighthouse that included a bench elevated thirty feet above the lake was purchased for the fog signal, and the necessary materials and work crew were landed on the island on August 27, 1890. A landing and water supply crib was built at the lakeshore that was linked to the fog signal building by a 142-foot-long tramway. The new first-class steam siren, transferred from Skillagalee Lighthouse, commenced operation on December 6, 1890. To help with the additional workload required to operate the fog signal, an assistant keeper was assigned to the station, which up to this point had just one keeper. A second assistant was added in 1898, and in 1902, additions and alterations were made to the dwelling to better accommodate the stations three keepers. Also in 1902, the boathouse was enlarged, around 250 feet of plank walk were laid, and a brick oil house was built.

In 1910, a new redbrick fog signal building was built just a few yards from the edge of the lake, and the fog signal was changed to a ten-inch steam whistle on November 18 of that year. An air tyfon fog signal was installed in 1933.

On April 17, 1916, the light source was changed to incandescent oil vapor, which increased the intensity of the white flash to 14,000 candlepower and the fixed light to 1,700. At this time, the lights signature was a 1.3-second flash every twenty seconds.

Dominick D. Gallagher, a Beaver Island native and former lumberjack and sailor, was hired as the stations second assistant keeper in 1902, and two years later he was promoted to first assistant keeper. After eight years as first assistant, Gallagher was appointed head keeper, a position he held for twenty years, far longer than any other head keeper at the station. During the thirty years Keeper Gallagher served at the lighthouse, he left the island only four times  three times to attend a relatives funeral and once for an operation. Upon his retirement in 1932, Gallagher planned to see more of the country by taking a cruise down Lake Michigan and then following the Mississippi River to the Gulf of Mexico.

On this page, you can listen to an audio recording made in 1938 of Dominick Gallagher singing the ballad The Gallagher Boys. In 1873, when Dominick was just six years old, his father, who also had the name Dominick, left Beaver Island for a trip to Traverse City aboard a twenty-four-foot boat. When it was time for the return trip to the island, a gale was blowing, and a Captain Roddy told Dominick he would be crazy to make the trip. Dominick argued that his wife was ill and needed him to which Roddy replied, Its better for your wife to be without you for two or three days than to be without you forever. Dominick decided to make the trip later with Captain Roddy, and the next morning they learned the ship Dominick had been set to sail on had been lost. Dominicks wife and children presumed Dominick was aboard that ship and held a wake for him. Their grieving turned to rejoicing when Dominick showed up with Captain Roddy.

The light was electrified in 1938, and then discontinued in 1962, when an automated radiobeacon was established just north of the lighthouse.

After being leased to four individuals and having served as a hunting lodge for a time, the decommissioned lighthouse was declared surplus property in December 1972. Six educational and health organizations applied for ownership, and the lighthouse was awarded to a coalition of fourteen community colleges that planned to use the site for biology and ecological education. These plans must not have worked out, as in 1975 the property was deeded to Charlevoix Public Schools for the token sum of $1.

During the summers of 1978  1980, the Comprehensive Employment and Training Act (CETA) provided funds for underprivileged teenagers to live in tents at the lighthouse and help restore the historic structure. By this time, nearly all the windows and doors in the lighthouse were broken, and the interior walls were peppered with gunshot holes. Students from Beaver Island High School donated their time during the winters to convert a maintenance building into a cafeteria and further the restoration of the lighthouse.

For many years, the lighthouse was run as the Beaver Island Lighthouse School, available for students in northwest Michigan, aged sixteen to twenty-one, who had dropped out of school or were at risk of doing so. Three forty-eight-day sessions were offered each year  fall, winter, and spring  during which students were given two, four-day breaks to return to the mainland.

Steve Finch was serving as the schools site supervisor in 2011, but just a few years before that he had been traveling the country as a salesman when his own son, who was struggling in school, graduated from the lighthouse school. I figured I could end my life having sold a bunch of stuff, or I could help change some lives, Finch said. After working with the schools summer construction camps, Finch quit his sales jobs and took charge of the school.

Using a $257,813 Clean Michigan Initiative, Waterfront Redevelopment Grant and a $150,000 National Park Service, Save Americas Treasures Grant, the lighthouse and fog signal building were restored in 2003  2004. Though the lighthouse no longer serves its intended purpose of guiding mariners through the treacherous waters surrounding Beaver Island, it has helped many a young person make important course corrections in their journey through life.

Facing inadequate funding due to a change in federal legislation, Beaver Island Lighthouse School announced in July 2016 that it would be forced to close its doors. Charlevoix County and Networks Northwest, who ran the Lighthouse School, teamed up to purchase the lighthouse and surrounding proeprty from Charlevoix Public Schools for $215,000 in 2019. The new owners plan to work with the Beaver Island Historical Society to identify potential uses for the site.

For a larger map of Beaver Island Lighthouse, click the lighthouse in the above map.

There is a fourth-order Fresnel lens in a display case inside the lighthouse. It is believe that the lens may have been used in South Fox Island Lighthouse.


Inside the corridor that links the dwelling to the tower is a display on the history of the lighthouses and a display cabinet containing a fourth-order Fresnel lens. According to a sign near the lens, the lens was reportedly used for fifty years at the William Livingston Lighthouse on Belle Isle near Detroit.