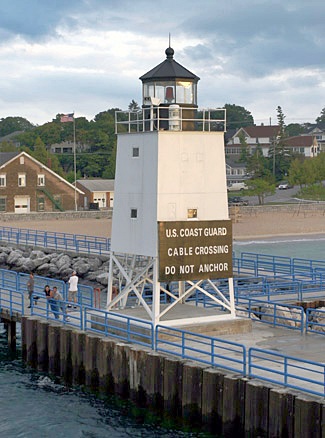 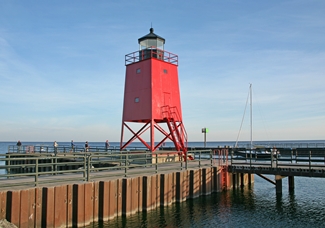 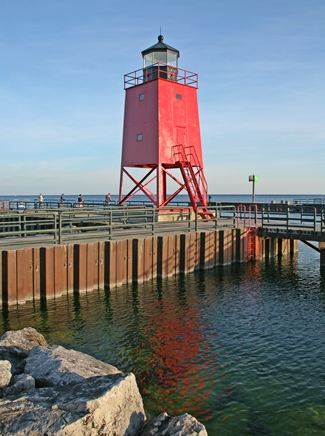 Named after the French explorer Pierre François Xavier de Charlevoix, Charlevoix, Michigan was first settled in the early 1850s and then incorporated as a village in 1879. Charlevoix is situated on an isthmus between Lake Michigan and Lake Charlevoix and encircles tiny Round Lake, which, along with the Pine River, serves as a link between the two larger lakes. With all this shoreline, it isnt surprising that Charlevoix developed into a resort destination, featuring extravagant hotels and three summer associations. An early admirer of the village called it Charlevoix the Beautiful, and ever since the local Chamber of Commerce has been using the appellation in its promotional material.

The first effort to improve access from Lake Michigan to Round Lake was in 1868, when a roughly 100-foot-wide channel between the two lakes was dredged and lined by close piling. In 1876, work began on replacing the piling with cribwork piers, and in 1885, a square, open-frame tower topped by an iron lantern was built at the lighthouse depot in Detroit and installed atop the Lake Michigan end of the north pier. As part of this work, nineteen crossties in the cribwork were replaced with sound ones so that trestles could be secured to them to support a 750-foot-long elevated walkway, erected to provide access to the lighthouse in inclement weather conditions. The work was begun in July and finished on August 28, 1885, allowing the pierhead light to commence operation on September 1, 1885. A fifth-order Henry-Lepaute Fresnel lens was used in the towers lantern room to produce a fixed red light at a focal plane of thirty-seven feet above the lake.

A temporary keeper must have kept the light for the first few weeks, as on October 3, 1885, a local publication announced that Wright Ripley, the regularly appointed keeper who had served as an assistant keeper at Port Austin for two years, had arrived at Charlevoix on the Lawrence, accompanied by his wife, three sons, and their household goods.

A shed, measuring eight by ten feet and standing eight feet high, was built at the shore end of the elevated walk in 1890 to store oil and supplies. By this time, the channel between the piers had shoaled up, forcing larger vessels to tie up to the piers and offload their freight. Keeper Ripley complained that these vessels smoked up the lighthouse and caused the light to tremble.

In 1904, 720 running feet of elevated metal walkway replaced the dilapidated wooden walkway. A fog bell, tolled by an electrically powered striking machine, was mounted on the lakeward face of the lighthouse in 1909. A brick oil house was added to the station in 1910.

Before Pine River was enlarged to facilitate boat traffic between Lake Michigan and Round Lake, a wooden dock was extended into Lake Michigan just north of the rivers mouth. Vessels could then tie up along the dock to be filled with lumber cut from the surrounding area. Amos Fox and his business partner, Hiram Rose, were the visionaries responsible for the construction of the dock. Mr. Fox lived at 103 Park Avenue in a lovely, Victorian dwelling. In 1908, the home was purchased by the government to be used as a dwelling for the keeper of Charlevoix Lighthouse. The keeper originally lived in a dwelling that was purchased as part of the lighthouse reservation, but after this burned down, Keeper Ripley had been living in a leased residence.

In time for the opening of navigation in 1914, the wooden lighthouse was relocated to the southern pier and a skeletal, steel, pyramidal tower was erected on the north pier. An occulting white light, produced by a lens lantern with an electric incandescent bulb, was exhibited from atop the new metal tower at a height of sixty-one feet. In 1938, the fog bell on the south pierhead was superseded by a type C air diaphone, which sounded a two-second blast every twenty seconds. Charlevoix residents quickly became accustomed to the new fog signal and affectionately called it Ferdinand.

Before it had been retired, the fog bell served an interesting purpose on February 28, 1929. On that date, Ernest Hutzler, who was keeper of the light at that time, operated the fog bell to guide three automobiles to Charlevoix from Beaver Island through a dense fog. This was the first known instance of cars running across frozen Lake Michigan between these two places.

The pierhead light at Charlevoix was looked after by a keeper until 1940. Eight years later, the old wooden lighthouse was replaced by the present steel tower, fabricated in Milwaukee. A piece of the original lighthouse still exists, as its lantern room was transferred to the new tower. A newspaper article from 1948 contained the following in reference to the old wooden tower: Many of its beams were so rotten that Coast Guardsmen say they often wondered that it did not collapse during a storm.

No longer needed after automation of the lighthouse, the former keepers dwelling was sold in 1944 to Edward J. Smith, a local resident, for $2,550 and then purchased by Dr. Walter and Betty Hoffmann in 1962. Betty Hoffmann later donated the residence to the City of Charlevoix, which razed the dwelling in 1984 to create Hoffmann Park. A metal plaque in the park carries a depiction of the old dwelling.

In 2005, Charlevoix South Pier Lighthouse, deemed excess by the Coast Guard, was offered at no cost to eligible entities, including federal, state, and local agencies, non-profit corporations, and educational organizations under the provisions of the National Historic Lighthouse Preservation Act of 2000. After the review process, the National Park Service awarded the lighthouse to the City of Charlevoix in 2008.

In March 2009, Charlevoix Historical Society was awarded $29,666 for work on Charlevoix South Pier Lighthouse from the Michigan Lighthouse Assistance Program, which is administered by the State Historic Preservation Office and funded by proceeds from the sale of Michigans Save our Lights license plate. Evidence of this work was clearly apparent in August 2009, as the lighthouse, which had been white since 1968 was painted bright red, a color it had sported for many years.

For a larger map of Charlevoix South Pier Lighthouse, click the lighthouse in the above map.

From Highway 31 in Charlevoix, turn west on Park Avenue, the first street south of the drawbridge over Pine River. Follow Park Avenue for two blocks then turn right and proceed to the park, from where you can view Charlevoix Lighthouse.

The fifth-order Fresnel lens used in Charlevoix South Pier Lighthouse is on display at the Coast Guard base in St. Ignace.

The lighthouse is owned by the City of Charlevoix. Grounds open, tower closed.