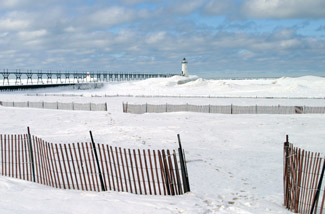 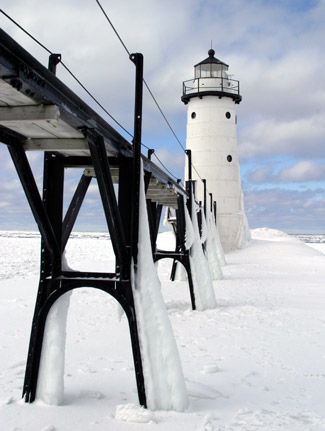 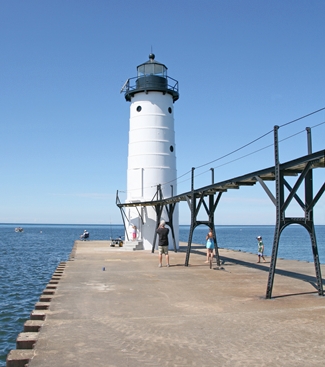 Manistee River runs 190 miles through a portion of Michigans northern Lower Peninsula before expanding into Manistee Lake just before reaching Lake Michigan. The name Manistee is an Ojibwe word, and though its derivation is uncertain, it likely comes from ministigweyaa, meaning a river with islands at its mouth.

Missionaries and traders built cabins along the river in the early nineteenth century, but the first permanent Euro-American settlement was made on April 16, 1841, when John and Joseph Stronach arrived at the mouth of Manistee River in a schooner loaded with fifteen men and equipment for establishing a sawmill.

As early as 1851, representatives from Michigan started petitioning Congress for a lighthouse and harbor improvements at the mouth of Manistee River. Congress appropriated $5,000 for a lighthouse on June 20, 1860, but this amount reverted to the treasury, and it wasnt until July 28, 1866 that $10,000 was allocated for building the lighthouse, provided that a careful survey was first made and the character of the required structure determined.

Before the federal government started work in 1867 on parallel cribwork piers that would extend into Lake Michigan for about 960 feet, local enterprise had built crude slab piers at the rivers entrance that provided a channel with a depth of seven feet. A site for the lighthouse on the north side of the river was purchased in 1868, and work on the structure began the following year. Although the frame dwelling with an integrated tower was not entirely completed, Keeper Octavius W. Barney displayed its light at the opening of the 1870 navigation season. After discovering that an addition made to the rear of the lighthouse was not on the purchased reservation, an additional parcel was acquired for $30.

On October 8, 1871, the same day as the Great Chicago Fire, Manistee was ravaged by a terrible fire. The following is one account of the conflagration: Down from the circling hills on the lake shore pounced the devouring monster. The burning sawdust, whirled by the gale in fiery clouds, filled the air. Hundreds of cords of dry pitchy slabs sent up great columns of red flame, that swayed in the air like mighty banners of fire, swept across the Manistee, 200 feet wide, and almost instantly, like great fiery tongues, licked up the Government lighthouse, built at a cost of nearly $10,000, situated 150 feet from the north bank of the river.

The Lighthouse Board noted that Keeper John McKee, with commendable energy, established a temporary light within a few days after the fire. On May 18, 1872 Congress allocated $10,000 for rebuilding the lighthouse. A construction crew arrived on site from Detroit in July and by September the new lighthouse was finished. Like its predecessor, the lighthouse consisted of a frame dwelling with a tower atop one end of its pitched roof. This new light would not be active for long. The piers near the lighthouse were finally reaching their planned lengths, and a pierhead light was completed and lit at the end of the south pier on October 15, 1875, replacing the shore-based lighthouse. In 1879, the pierhead light was moved 156 feet lakeward, and the elevated walkway, used to reach the light, was extended the same distance.

During the year ending June 30, 1887, 1,585 vessels had cleared the harbor at Manistee carrying over 470,000 tons of merchandise. Most of this was wood products, including over 225 million board-feet of lumber and more than 280 million shingles. Noting the great number of vessels calling at Manistee in 1887, the Lighthouse Board recommended the establishment of a steam fog signal to enable vessels to find the harbor entrance in thick weather. Congress responded with the requested $5,500 on March 2, 1889, and a ten-inch steam whistle was established on the south pier on February 10, 1890. The fog-signal building contained a coal bin, a workbench, and a tank for the water needed to feed the boilers and machinery for the steam whistle.

While the fog signal building was under construction, a second light was placed on the pier to form a range. The Lighthouse Board gave the following description of the new light, which was activated on November 30, 1889: A tubular lantern pierhead range-light was established at the outer end of the south pier to aid vessels in effecting an entrance to the harbor. The lantern is hauled to the post from the watch-room and is returned along a wire rope, with an additional wire to steady the foot, by a cord operating through a window cut for the purpose.

On June 18, 1894, the light atop the gable end of the keepers dwelling was reestablished with a fifth-order lens showing a fixed white light punctuated every forty-five seconds by a red flash. On this same date, the pierhead light and fog signal were discontinued and transferred to the north pier, where the keeper could more easily reach them. The following account of the new aids on the north pier appeared in the Annual Report of the Lighthouse Board.

The pierhead light and fog signal were transferred from the south to the north pier. A conduit was built on the north pier. The lantern shown from its outer end is run in and out. The conduit consists of framed trestles, erected and secured to the cross timbers of the pier with machine bolts, carrying a continuous box or conduit of 1-inch boards, sized and rabbeted, with battens and braces, and painted. The conduit is 290 feet long and extends shoreward to the new fog-signal house on the north pier. A new elevated walk, 460 running feet long, was built on this pier, extending shoreward from the rear of the fog-signal house; the old elevated walk on the south pier was taken down and 463 feet of it was transferred to the north pier.

About 100 cubic yards of clay and muck were delivered to the station in 1895 for top-dressing the grounds around the keepers dwelling. A fence surrounding the dwelling was also extended that year to enclose the lighthouse grounds. In 1897, a parabolic deflector was placed behind the fog whistle to direct more of the sound lakeward. That year, the fog signal was in operation 572 hours and consumed roughly fifty-two tons of coal and three cords of wood.

In 1900, the lens lantern displayed from the end of the conduit was discontinued, and the conduit was removed from the pier. The fog signal building was moved 260 feet lakeward and an octagonal lantern was placed atop its front gable. A new sixth-order light was established therein on June 9, 1900, and the whistle and sound deflector were raised four feet to clear the new lantern room. Some 6,000 bricks were delivered to the station in 1900 to build a new oil house.

The main light atop the keepers dwelling was discontinued between February 24 and March 5, 1902, so a new revolving apparatus could be installed for the lens. In 1914, a breakwater was completed on the south side of the river entrance to create an outer harbor. On April 14, 1914, a post lantern was established about eighty feet from the end of the breakwater. This temporary light was replaced in December 1915 by a red skeletal tower, set atop a concrete base, that displayed a flashing red light. Keeper Milton McClure was awarded a lighthouse efficiency pennant for having the model station in the district for 1915. A modern structure marks the end of the south breakwater today.

In 1925, the lights at Manistee were electrified, greatly increasing their intensity. Two years later, the current thirty-eight-foot-tall cylindrical tower was erected on the pierhead and equipped with an air diaphone fog signal, replacing the old steam whistle. The wooden walkway was removed at this time along with the old fog signal building, and the current cast iron walkway was put in place. With the establishment of the new pierhead tower, the main light was discontinued.

Wallace S. Hall, who was head keeper of Manistee Pierhead Lighthouse from 1923 to 1941, was a skilled carver and crafted a model of the lighthouse tender Sumac that was so perfect that it was placed on display in the lighthouse exhibit at the Worlds Fair held at Chicago in 1933 to mark the citys centennial. The model was thirty inches long, five inches wide, and featured equipment and apparatus carved to scale.

In 1993, the old wooden lighthouse was moved to the western end of Second Avenue, where it is used as a private residence.

Manistees catwalk, which is one of only five on the east coast of Lake Michigan, was transferred to the City of Manistee in January 1990 and refurbished in the early 1990s through a Save the Catwalk campaign, spearheaded by the local Chamber of Commerce. Clocks constructed of wood from the old catwalk were sold to raise money for the work. The other remaining catwalks are at St. Joseph, Grand Haven, South Haven in Michigan and Michigan City in Indiana.

In 2009, Manistee North Pierhead Lighthouse, deemed excess by the Coast Guard, was offered at no cost to eligible entities, including federal, state, and local agencies, non-profit corporations, and educational organizations under the provisions of the National Historic Lighthouse Preservation Act of 2000. The light was transferred to the City of Manistee and the Manistee County Historical Museum in a ceremony held at Fifth Avenue Beach on June 30, 2011. The museum is now responsible for restoring and maintaining the lighthouse.

A Historic Structures Report for the lighthouse was completed in the spring of 2015 allowing for the creation of construction bidding documents to cover the restoration of the structure. After the museum had raised over $175,000 for the project, work on the pierhead tower began in April 2016. The tower was shrouded in plastic so the old paint could be removed and a new coating applied. Were going to get it repainted; new glass and hardware at the lantern level, some steel repair, new concrete steps, said Frank Mihm of the work being done by his company, Mihm Enterprises. Its basically getting a complete facelift from the exterior. And hopefully funds become available and they can do the interior as well.

For a larger map of Manistee North Pierhead Lighthouse, click the lighthouse in the above map.

From Highway 31 in Manistee, take Memorial Drive, the first street north of the Manistee River, west towards Lake Michigan. Memorial Drive will become 5th Avenue. Take 5th Avenue to John Red Szymarek Park at the corner of 5th and Monroe. Turn right and follow Monroe to a traffic circle whose center piece is a lighthouse. Go 3/4 of the way around the circle and turn right on Lakeshore Drive. You can either park in the 4th Avenue beach parking lot or continue on a bit and possibly park near the Coast Guard Station, from where you can walk the breakwater to reach Manistee Lighthouse.

The lighthouse is owned by the City of Manistee. Grounds open, tower closed.