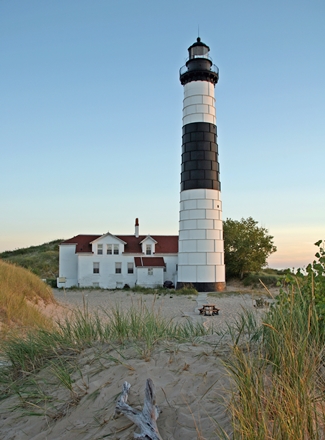 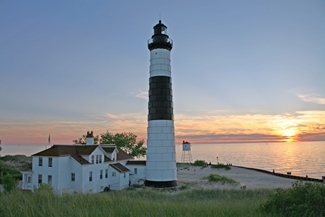 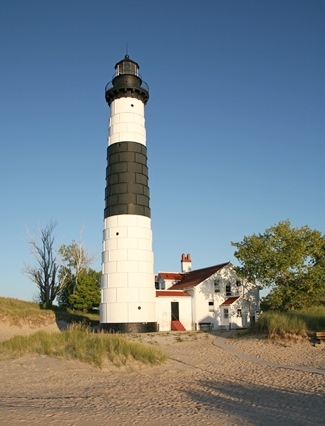 According to Captain Neils C. Palmer, who for many years was officer in charge of the Ludington Coast Guard Station, the blackest year in maritime history for the Ludington area was 1855, when several ships, including the schooners Samuel Strong, G. W. Weeks, and Almina, were wrecked with significant loss of life. Called Grande Pointe au Sable by French explorers and traders, Big Sable Point, located roughly nine miles north of Ludington, was a prominent landmark for mariners traveling this treacherous stretch of Lake Michigan. Congress appropriated $6,000 for a lighthouse on Big Sable Point in 1856 and the Michigan Legislature ceded the necessary land the following year, but only $888 was spent before the remainder of the appropriation reverted to the treasury.

Following the Civil War, the matter of a lighthouse for Big Sable was picked up again, when the Lighthouse Board noted in 1865 that the point was the most important point on the eastern shore of Lake Michigan between Pointe Betsie and Muskegon and wrote that the interests of commerce demand that it be suitably lighted. Congress appropriated $35,000 for the lighthouse in July 1866 and work soon got underway at the site. A stone foundation, extending six-and-a-half feet below the ground was first prepared, and atop this a brick tower was built that tapered from a diameter of roughly nineteen feet at its base to just over thirteen feet at the lantern room. Eight circular windows provide light for the towers interior. The upper portion of the 112-foot tower consists of a watchroom, encircled by a gallery, and the lantern room, in which a third-order L. Sautter & Cie. Fresnel lens was installed.

The dwelling for the keepers was connected to the southern side of the tower by a fourteen-foot-long covered passageway. Built of Milwaukee Cream City brick, which was also used for the tower, the one-and-a-half-story dwelling had an apartment on the ground floor for the keeper and one upstairs for the assistant keeper. Alonzo Hyde, the first head keeper, lit the towers lamp for the first time on November 1, 1867, sending forth a fixed white light that could be seen for up to nineteen miles.

A circular iron oil house, capable of storing 360 gallons, was erected 106 feet south of the lighthouse in 1893. By 1899, it was apparent that measures had to be taken to preserve the deteriorating brick in the tower. A contract to address this issue was entered into on December 14, 1899, and the following year the tower was encased in eighteen metal cylinders, with different diameters, that were placed one on top of the other. The metal had a thickness of three-eighths of an inch, and the space between the cylinders and the tower was filled with concrete. When the work was completed in June 1900, the metal tower was painted white with its middle third black. In October 1916, its current daymark was established when the color of the watchroom and lantern room was changed from white to black.

A small brick oil house, with a metal roof and door, was added to the station in 1903. In 1905, the upper portion of the tower inclosing the watchroom was encased with metal, completing the protection of the tower from its base to a point immediately below the lantern deck.

A brick fog signal building was built southwest of the lighthouse in 1908 and outfitted with duplicate twenty-two horsepower oil engines and compressors. The compressed air was stored in a tank before exiting the building through a six-foot trumpet. The fog signal, which went into operation on May 20, 1909, sounded two blasts every forty-five seconds in the following manner: three-second blast, twelve seconds silence, three-second blast, twenty-seven seconds silence.

In 1909, work began on expanding the keepers dwelling to accommodate a second assistant to help with the increased workload caused by the fog signal. After the addition, the dwelling had eight rooms for the head keeper in one part, and two three-room apartments for the assistants. The intensity of the light was increased on June 25, 1910 through the installation of an incandescent oil vapor lamp, and a new oil house was erected the following year.

In 1934, Keeper Lewellyn Vannatter reported that he could see the following lights on the opposite side of Lake Michigan, which were normally only visible for twenty miles: Twin River Lighthouse (distant 53 miles), Sturgeon Bay Canal Lighthouse (distant 65 miles), and the airway beacon atop the Colgate-Palmolive-Peet Building in Chicago (distant 160 miles!). What Keeper Vannatter must have experienced is a rare and complex atmospheric condition known as the Fata Moranga, which allows a person to see a reflected image of the opposite shoreline.

During the summer of 1934, a large sea serpent had struck terror in the hearts of swimmers and boaters in Lake Michigan. Keeper Vannatter and Arthur Fichtner, one of his assistants, solved the mystery surrounding this creature when they discovered a large wooden head and midsection on the shore near Big Sable Lighthouse. The sections were expertly painted and jointed together, and the head featured gleaming eyes while the midsection had an eight-inch saw-tooth fin running along its length. The monster, which must have measured around fifty feet in length, was equipped with a keel to keep it upright.

Keeper Vannatter was injured while on duty in 1931. While using a winch to lower a boat, Vannatters hand slipped of the winchs handle allowing it to spin around and strike him in the head. The Coast Guard was summoned to the scene and transported Vannatter by boat to Ludington, where he was transported to a hospital and treated for a slight fracture of the skull over his eye. Keeper Vannatter served at Rawley Point Lighthouse and Milwaukee Pierhead Lighthouse before being appointed second assistant at Big Sable in 1912. After six years at Big Sable, Vannatter was transferred to South Fox Island Lighthouse where he served as first assistant keeper before returning to take charge of Big Sable Point Lighthouse in 1923. Keeper Vannatter retired on disability in 1936 at the age of fifty-seven.

In 1926, the Secretary of Commerce deeded 800 acres around Big Sable Point Lighthouse to the State of Michigan for use as a state park. In return, the state was required to build a road to the lighthouse and keep it in good repair. Before the road was built, the keepers would occasionally trudge the nine miles to and from Ludington in a single day to pick up supplies and mail.

The modern conveniences of electricity, provided by a diesel generator, and indoor plumbing and heating were added to the station in 1949. Power lines were extended to the point in 1953. In 1968, the tradition of light-keeping begun in 1867 ended when Homer Meverden, the stations last civilian keeper, left. Coast Guard personnel looked after the station until April 1971 when the automated station as left unattended. Bernard Smith was the last Coast Guard officer-in-charge of Big Sable Lighthouse and called his four-month stint there a real privilege.

Les Meverden, son of Homer Meverden, said living at the lighthouse was a lovely life for kids. He and the children of the other keepers skied and skated in the winter and would build model airplanes and launch them from the top of the tower in the summer. During the school year, the kids would be driven by one of their parents to the bridge in the park to catch the bus, but would often have to walk back to the lighthouse from that point after school. Twice during his years at the lighthouse, Les was able to see the lights from Wisconsin from atop the tower.

After being left vacant by the Coast Guard, the light station was used by the Foundation of Behavioral Research in the early 1970s under the leadership of the research director of Kalamazoo State Hospital. After the directors position was terminated for mishandling funds, the states Department of Social Services ran an experimental program for delinquents at the lighthouse using survival therapy techniques.

Expecting the lighthouse to topple into Lake Michigan at any time, the Coast Guard built a new tower farther inland in 1985 as a backup. The Fresnel lens was removed from the lighthouse at this time and replaced by a modern beacon mounted outside the lantern room. The third-order lens from Big Sable was on display at the maritime museum at Historic White Pine Village for several years, and then after a restoration in 2016, the lens was placed on display at the Port of Ludington Maritime Museum.

The Foundation of Behavioral Research became caretakers of the lighthouse again in October 1986, when they signed a twenty-five year lease on the property. The foundation worked closely with Big Sable Point Lighthouse Keepers Association, which was formed in 1987 to save the station. Local businesses joined in the battle to fight erosion on the point, and the work paid off  the backup light never had to be used. The Keepers Association, which is now known as Sable Points Lighthouse Keepers Association to reflect its expanding stewardship over other lighthouses, took over the lease for Big Sable in the early 1990s. The station was transferred from the federal government to Michigans Department of Natural Resources in 2002, but a new lease was quickly granted to the Keepers Association who will continue to care for the property.

During the summer months, volunteer keepers live in the second story of the keepers dwelling and provide tours to visitors and help with general maintenance. The Keepers Association have recreated the station as it appeared in 1948, and one major step in achieving this goal was the completion in 2009 of a replica of the 1941 fog signal tower.

For a larger map of Big Sable Point Lighthouse, click the lighthouse in the above map.

From Ludington, proceed north on Highway 116 (Lakeshore Drive) for 6.5 miles to Ludington State Park. At the park, ask for directions to the trailhead for the 1.6 mile walk over a sandy road to Big Sable Lighthouse. The lighthouse is open daily from 10 a.m. to 5 p.m., May through October. Call (231) 845-7417 to confirm hours.

The third-order lens from Big Sable is on display at Port of Ludington Maritime Museum.

The lighthouse is owned by the Michigan Department of Natural Resources and is managed by Sable Points Lighthouse Keepers Association. Grounds open, dwelling/tower open in season.