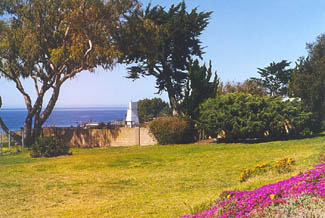 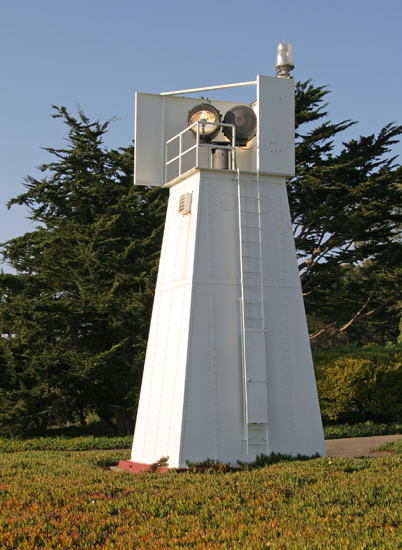 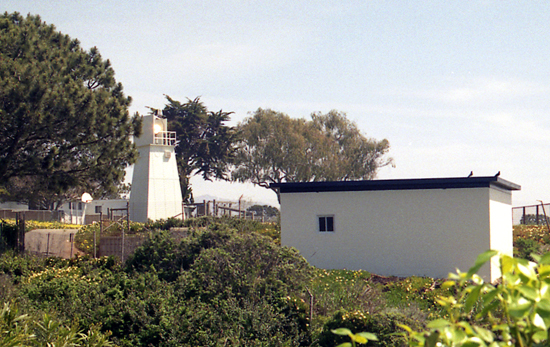 The first keeper at the station was Albert Williams. After four years, he was removed from the office of keeper and tried his hand at farming nearby. After a string of three short-term keepers, the position was again offered to Williams in 1865. He declined, but his wife Julia accepted. Since the station did not have a fog signal, Julia was able to maintain the light by herself, while raising three boys and two girls.

An article in The Los Angeles Times in 1893 provided a brief history of Julia Williams:

Mrs. Julia F. Williams, the keeper of the light, is of New England parentage and was born on the island of Campobello, New Brunswick, July 12, 1826. She possesses the New England characteristics of industry and thrift, and the lighthouse dwelling is neatness itself. The modest little parlor contains a piano, and instead of the usual library supplied by the lighthouse service, the bookshelves contain a private collection of such works as complete sets of Dickens, Thackery, McCauley, Prescott, Irving, the Wavery novels and a number of poets.

Forty years ago Mrs. Williams and her little child set sail from New York for the far-away shore of California to join her husband, who had been one of the adventurous spirits of 49. A fine daguerreotype of her, taken at that time, shows a grave, thoughtful face of rare sweetness and beauty, with a high, intellectual brow and a nature fitted for life among refined and cultivated people.

Julia and her daughter sailed to Panama, where they crossed the isthmus with much difficulty, before catching a steamer to San Francisco. When her husband Albert died in 1882, Julia decided to stay on at the lighthouse. A decade later, The L.A. Times painted the following picture of Santa Barbaras female lighthouse keeper. Her hands are shriveled and worn, the once brown hair has grown gray and the expressive face is deeply seamed with the lines of care, telling more plainly than words that life has been attuned to a minor key; but the eyes tell of courage and fidelity and a calm faith in the Supreme goodness. In its 1868 report, the Lighthouse Board noted some modifications that were made to the lighthouse. As the cellar was prone to flooding during the winter rains, its floor was torn up, a drain was installed, and a new brick floor was laid, this time with the bricks laid on edge rather than flat. A storm-house was also built over the kitchen door to afford protection from the elements, and the stove-pipe which passed through the roof was replaced by a brick chimney as a safety measure. The original lens only covered an arc of 180°, and the addition of one or more additional panels was suggested as mariners approaching outside this angle saw no light.

Julia Williams tended the light for more than forty years, and during that time the only two nights she was reportedly absent from the lighthouse were when she attended the weddings of two of her sons. As the water supply at the station was often insufficient, Julia would frequently take the stations horse to the nearest stream to fetch water. Once there, Julia would give her children a bath if needed and then fill up two wooden buckets with water. More than once, the mare threw off the heavy buckets, but Julia would patiently refill them and give the horse a lump or two of sugar to calm her down.

The lamp used in the Fresnel lens was changed in 1880 from a Funck lard-oil lamp to a Hains mineral-oil lamp. In 1893, a fifty-foot-deep well was dug near the lighthouse to augment the water supply. The following year, an iron windmill was erected over the well to feed water into a 5,000-gallon cistern that sat atop a substantial foundation and was connected to the dwelling and grounds by pipes. In 1897, the water tank was housed in to prevent evaporation.

In 1905, Julia fell and broke her hip. Thinking it was only a minor injury, she continued to work for a few days, but soon had to be hospitalized. The fall brought an end to her lightkeeping career at the age of eighty-one.

The following recommendation was first contained in the Lighthouse Boards annual report for 1894, and then regularly repeated until 1904. The light-house at this station was built in 1856. It is of brick, with the outer wall stuccoed. The light is shown from an old-fashioned lantern, with triangular-shaped glass, built on top of the dwelling. The structure is unsightly and uncomfortable, and in winter the walls are damp. To put this building in good repair would cost as much, if not more, than to build a new modern structure. This can be done, it is estimated, for not exceeding $7,500, and it is recommended that an appropriation of that amount be made therefor.

In 1912, a high-power flashing lens, which had formerly been used at Alcatraz Island, was installed in Santa Barbara Lighthouse, changing the lights characteristic from fixed white to a white flash every fifteen seconds. While this strengthened the light, trees on adjacent land were starting to obscure the light, and it was noted that the new tower should be built closer to the shoreline.

As Congress failed to provide funding, it wasnt a new lighthouse but rather Mother Nature that did in the old structure. On June 29, 1925, a severe earthquake shook Santa Barbara. It seems that most earthquakes strike in the early morning, and this one did too, hitting at 6:45 a.m. Raymond Weeks, the acting keeper and son of the late Keeper Harley A. Weeks, was thrown from his makeshift bed in an outbuilding, where he had been forced to spend the night due to the large number of relatives that had spent the night after a gathering the previous evening. Concerned for his familys safety, Weeks ran to the lighthouse and ushered everyone outside. Just moments later, the tower and lantern came crashing down, followed soon by the walls of the small dwelling. The Fresnel lens was shattered, and the structure was a total loss, but everyone escaped injury other than serious fright and slight bruises. The succinct entry in the station's logbook for that day was: Earthquake at 6:45 a.m. Tower and building down, but it must have been entered later as Raymond H. Weeks, acting keeper of the light since his father passed away in March 1925, didnt find the logbook until July 6.

A temporary acetylene light, exhibited from a frame tower, replaced the lighthouse on July 3rd and served until a more permanent tower was erected in January 1928. The temporary light was of 500 candlepower while the former light had been of 480,000 candlepower, and many complaints were received regarding the inadequacy of the temporary measure.

In 1925, the Lighthouse Service noted its intention for a new station at Santa Barbara:

On June 29, 1925, the tower, dwelling, and oil house at Santa Barbara Light Station were destroyed by earthquake, together with the lantern, lens, and all other equipment of the tower. This station was built in 1856, being one of the first lights established on the California coast, and its early reestablishment is necessary for the proper protection of navigation. Fog is frequent occurrence along this part of the coast, and the safety of navigation requires the establishment of a first-class compressed-air fog signal, the establishment of which has been requested by navigation interests for a number of years. The nearest aid to navigation to the southward is Point Hueneme Light Station, distant 30 miles, while the nearest aid to the northward is Point Conception Light Station, distant 40 miles. There is heavy traffic through the Santa Barbara Channel at all times, and as northbound vessels keep close inshore to avoid the prevailing northwesterly wind and sea a fog signal is urgently required, a distance of 70 miles between adjacent signals being too great for the proper protection of navigation. The old masonry tower and dwelling destroyed by the earthquake were not of a suitable type for a locality that may be subjected to future earthquake disturbances. It is proposed to construct a reinforced concrete tower about 70 feet in height nearer to the shore line, where the light will not be obscured from seaward by the tall trees which have grown up on the adjacent property, and to install a third-order lens with flashing light. It is also proposed to construct a reinforced concrete fog-signal building and to install a type f diaphone, operated by compressed air furnished by duplicate air compressors, one driven by an electric motor and the other by an internal-combustion engine. In lieu of the old masonry dwelling it is proposed to construct two substantial frame cottages, of five rooms each, for the keeper and one assistant who will be required for the proper maintenance of the light and fog signal.

These ambitious plans were not fully realized as a fog signal was never built and the light tower was not a seventy-foot-tall concrete tower but rather an enclosed steel tower with a height of twenty-four feet. The beacon that was used atop the tower at Santa Barbara from 1935 to 1977 is now on display at Point Vicente Lighthouse.

For a larger map of Santa Barbara Lighthouse, click the lighthouse in the above map.

From Highway 101 in Santa Barbara, take the Carrillo Street exit and go west towards the ocean. Near the summit of the hill, Carrillo Street turns into Meigs Road. Follow Meigs Road towards the ocean until you see Lighthouse Place on your right. This is the entrance to the active Coast Guard compound where the light is located. Distant views of the light are available from areas around the compound, which is closed to the public. A good but distant view of the lighthouse is possible from a lookout area reached by continuing east on Meigs Road and then turning right at the intersection with Santa Cruz Boulevard and continuing to the end of the road.

While in Santa Barbara, be sure and visit the Santa Barbara Maritime Museum, where the first-order Fresnel lens from Point Conception Lighthouse is on display. Another nearby stop worthy of a visit for lighthouse aficionados is Rusty's Pizza Parlor at 111 State Street, where you will find a Fresnel lens and lighthouse-related displays.


I spent four years in graduate school at the University of California at Santa Barbara, but never ran across this lighthouse during that time. I'm sure I must have driven by it numerous times, but it isn't exactly a lighthouse that attracts a lot of attention.