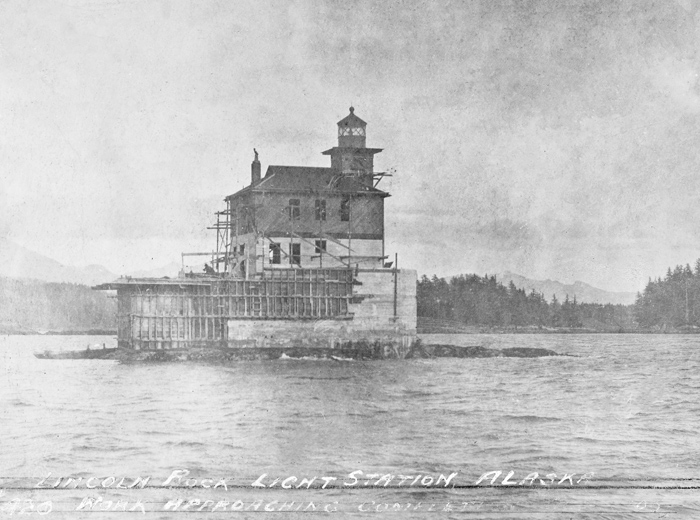 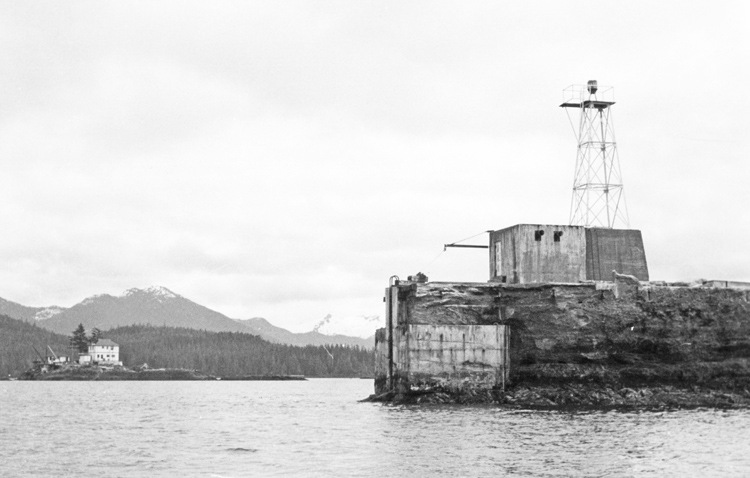 1902  Lincoln Rock, Alaska.Plans and specifications were made and on January 11, 1902, proposals for constructing the station were opened. The only proposal received was accepted, and contract was made on March 12, 1902. The contractor landed his men and part of the material on May 9, 1902. The concrete forms were set up, but were carried away during a storm. Lower forms were then put in and at the close of the fiscal year everything was in readiness for the reception of the concrete foundation. The contractor lost all his lumber, one small steamer, and a barge in taking his material to the site.

1903  Lincoln Rock, Alaska.At the end of the last fiscal year the contractor for the construction of the station was making very slow progress, and during the month of August closed down the work on account of stormy weather. He succeeded in placing about 280 cubic yards of cement in the pier. He resumed operations in March, 1903. and placed about 50 cubic yards of cement. On April 26, 1903, the superintendent at the station directed the contractor to cease operations on his contract, as he persisted in using rejected material. On June 5, 1903, the Department, through the Board, directed the annulment of the contract, and that the station be constructed by hired labor and purchase of material under existing regulations. Arrangements have been made for carrying out the work. By the terms of the contract the station should have been completed by September 30, 1902.

1904  Lincoln Rock, Clarence Strait, Alaska.The work of constructing the station was completed, and the station was on December 1, 1903, lighted for the first time. A cutwater was built on the south end of the pier to split the seas and prevent their breaking against the superstructure. A narrow apron on the footing was built around the base of the pier to prevent undermining by the sea at the junction of the pier with the surface of the rock. The vaults inside the pier were filled up with gravel to the level of the hoisting engine-room floor, and a cement floor was laid on the top of the gravel filling. The exterior of the pier was repaired at various points.

1904  Lincoln Rock, Alaska.The Daboll trumpet, which went into operation on December 1, 1903, was in use for some 98 hours only, and consumed about 61 gallons of oil. No report for June has yet been received from this distant fog-signal.

1905  Lincoln Rock, Alaska.Part of the landing platform, which was carried away by high seas, was restored. The fog-signal apparatus was repaired.

1910  Works urgently necessary: No. 3. Lincoln Rock light-station, Alaska.For rebuilding and improving the present light and fog-signal at Lincoln Rock, Alaska, or for building another light and fog-signal station upon a different site nearby, $25,000.
This station was badly damaged by severe storms of November 28, 1909, and April 14,1910. It is absolutely essential if the station is to be saved and maintained that it be properly rebuilt without delay.

1911  Lincoln Rock, Alaska.The act of March 4,1911, appropriated $25,000 for rebuilding and improving the present light and fog signal at Lincoln Rock, Alaska, on the present or an adjacent site. Preparations are being made to remove the fog-signal building and keepers dwelling to a small islet about 440 yards from the present station, and to establish an acetylene light at the present site. A survey of the small islet has been made and plans are completed. Up to June 30, 1911, no part of this appropriation has been expended or obligated.

1912  Lincoln Rock, Alaska.The act of March 4,1911, appropriated $25,000 for rebuilding and improving the present light and fog signal at Lincoln Rock, Alaska, on the present or an adjacent site. The work of rebuilding this station was started about September 1, 1911, and after being suspended for the winter was again started about May 1, 1912. The work will probably be completed in October, 1912. Amount expended under this appropriation to June 30, 1912, $8,646.25.

1913  Lincoln Rock, Alaska.The act of March 4,1911, appropriated $25,000 for rebuilding and improving the present light and fog signal at Lincoln Rock, Alaska, on the present or an adjacent site. The dwelling and fog-signal buildings were practically completed during the year. The acetylene light was temporarily installed in the old lantern on the rock. Work is about 90 per cent completed, and will be finished during the fall of 1913. Amount expended to June 30, 1913, $21,491.53.

1968  Light on island was discontinued, and structure was subsequently destroyed. A modern light is active on the site of the original lighthouse.

For a larger map of Lincoln Rock Lighthouse, click the lighthouse in the above map.

The modern light is best seen by boat.

The tower is owned by the Coast Guard.