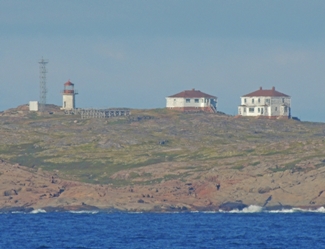 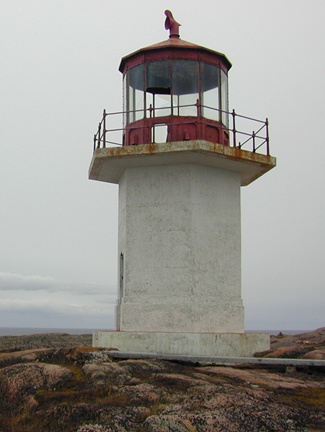 The St. Mary Islands are located offshore from the villages of Chevery and Harrington Harbour on the remote Lower North Shore of Quebec, and today they are home to a sanctuary for nesting seabirds. Construction of a reinforced-concrete tower and a wooden dwelling began in 1912 under the supervision of F.E. Cote and was completed in 1913. The hexagonal tower stood twenty-nine feet tall, but it had a focal plane of 114 feet above the waters of the Gulf of St. Lawrence. A revolving fourth-order lens was installed in the towers red lantern room and produced a group of two flashes every fifteen seconds. A two-storey keepers dwelling was situated near the lighthouse along with a couple outbuildings.

A fog alarm building was added to the station in 1920 - 1921, and the diaphone fog alarm equipment contained therein produced a four-second blast each minute as needed.

The first two head keepers of the light only served a few months each, but F.W. Osborne, the third head keeper, remained on the island for roughly thirty-five years. Donald Osborne began working as an assistant for his father in 1937 at the age of sixteen. We had to light the lights and blow the horn by hand, he recalled. We were responsible for the painting and the maintenance. We had to do it all.

The light then was a kerosene-vapor, Osborne remembered. We pumped air in one tank which sent kerosene from the other tank up a heated tube. The vapor that came out kept the light going.

In 1940, Donald Osborne was transferred to Belle Isle in Newfoundland, but after a year there he returned to St. Mary Island. Wanting to serve his country, Osborne joined the Armed Forces in August 1942, and the following February he left Halifax Harbour for the front. After three years of service in England and the Mediterranean, he was discharged and returned to lightkeeping on St. Mary Island. F.W. Osborne retired in 1948, and Donald was promoted to head keeper.

After eight years as head keeper, Osborne decided it was time for a change. We had four children then, he said. We were off on an island so I was teaching the oldest one his books. I realized that the next winter there would be two of them to teach, so when the opening came up in Souris, I took it. The Osbornes left St. Mary Island in 1956 for Souris Lighthouse on Prince Edward Island, where Keeper Osborne would serve as head keeper until retiring in 1974.

In 1981, the light atop the concrete tower on St. Mary Island was discontinued and replaced by a light on a skeletal tower. The current light on the island is displayed from a square, skeletal tower and flashes once every two-and-a-half seconds.

For a larger map of Île Sainte-Marie Lighthouse, click the lighthouse in the above map.

The light is best seen by boat.