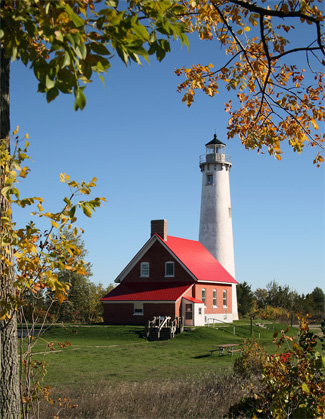 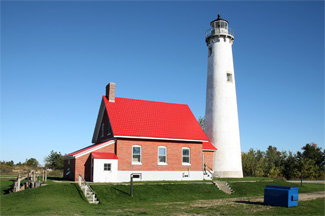 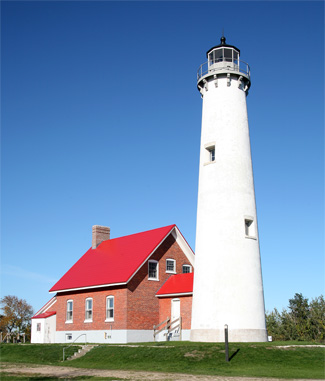 Lengthy Tawas Point, formerly known as Ottawa Point, lies near the northern entrance to Saginaw Bay and also forms the protected anchorage in Tawas Bay. The point and bay were named after Chief O-ta-was, the leader of a tribe of the Saginaw band of Chippewas. Early map makers, added an extra t, to form the name Ottawas. The s was later dropped to get Ottawa, and finally the name was change to Tawas, something a bit closer to the chiefs name. On September 28, 1850, Congress appropriated $5,000 for a lighthouse at Ottawa Point, and work on the thirty-acre site commenced in 1852, after it had been acquired from Daniel S. Ellethorpe for $200. A forty-five-foot-tall, rubblestone tower, which tapered from a diameter of twelve feet at its base to six feet, four inches at its octagonal cast-iron lantern room, was completed that year and, at the opening of navigation in 1853, started displaying a fixed white light produced by seven lamps set in fourteen-inch reflectors. In 1856, a fifth-order Fresnel lens replaced the array of lamps and reflectors, and the characteristic of the light was changed to fixed white varied every ninety seconds by a red flash.

Sherman Wheeler was hired as the first keeper of the light at an annual salary of $350, and he moved into a five-room, one-and-a-half-story, brick dwelling that measured thirty-four by nineteen-and-a-half-feet and had an attached kitchen. By 1869, the station was in desperate need of repairs. The plaster had fallen off the outside of the tower, the lantern room was leaky, and the dwelling needed a cistern and a new floor for its kitchen. These repairs, however, were not made, as the point on which the lighthouse stood had steadily grown to the south, leaving the light over a mile inland. Instead, the Lighthouse Board requested $30,000 for a new lighthouse or possibly a set of range lights to guide mariners into the protected waters of Tawas Bay.

On March 3, 1875, Congress appropriated $30,000 for a light-house on Ottawa Point, or for range to guide into Tawas Bay, on the northeast shore of Saginaw Bay, to be known as Tawas Light. The Lighthouse Board decided to build the new lighthouse on a shoal, south of Tawas Point, in four feet of water. Work on the tower and dwelling began on August 12, 1876 and was finished by the end of the year. During the winter, the Fresnel lens was transferred from the old tower to the new tower, and the light was exhibited from the new lighthouse on the opening of navigation in 1877.

The new, conical tower measured sixty-seven feet, three inches, from its base to the ventilator ball atop its decagonal lantern room, and its diameter tapered from sixteen feet to nine feet, eight inches. Connected to the tower by a covered passageway was a redbrick, two-story dwelling that had eight rooms for the keeper and his family.

In September 1884, a crib protection, 130 feet long, 10 feet wide, and 4 feet high, was added to the northwest corner of the lighthouses existing cribwork and filled with stone and brick cannibalized from the old lighthouse. Additional cribwork protection was added the following year to the north and southwest sides of the station. All the necessary timber for the work was obtained on the nearby beach, and the fill was again from the old lighthouse, so the only expense was labor.

On September 1, 1891, a new fourth-order, Sautter, Lemmonier, & Cie. Fresnel lens was installed in place of the old fifth-order lens, increasing the power of the light and changing its characteristic to twenty-five seconds of white light, followed by a five-second eclipse. The eclipse was produced by a hood around the lamp that was raised and lowered by a clockwork mechanism. Every five hours, the keeper would have to wind up a weight that powered the clockwork mechanism and dropped roughly the full height of the tower.

In 1896, the timber platform around the dwelling and tower was rebuilt, and work began on extending the landing dock 640 feet to reach deeper water. Two years later, the stations boathouse was rebuilt atop a crib on the landing wharf, and a brick oil house was erected. A three-man crew from Detroit was able to build the oil house in just four-and-a-half days.

Work on adding a fog signal to the station began in June 1899, when foundation trenches were dug and footings were laid five-eighths of a mile southwest of the lighthouse  clearly, the point had continued to grow since the completion of the lighthouse twenty-three years earlier. A brick fog signal building, measuring forty-two by twenty-two feet and equipped with a cement floor and a hipped roof, was built to house a ten-inch steam whistle, which was ready for operation on September 28, 1899. The fog signal building was surrounded by a cribbing of logs and linked to the lighthouse by a telephone system, a boardwalk, and a tramway.

Central Boiler Works of Detroit provided the steam boiler for the fog signal, while Fulton Iron and Engine Works, also of Detroit, built the steam engine. These items were delivered to the Detroit lighthouse depot in the spring of 1899, and the lighthouse tender Amaranth conveyed them to Tawas Point later that summer. Roughly forty minutes were required to build up the necessary seventy pounds of pressure to sound the steam whistle, so the keepers had to be good and predicting the onset of fog or thick weather.

As an assistant keeper was needed to help with the additional workload created by the fog signal, the Lighthouse Board requested $5,000 in 1901 for an additional dwelling. George Galbraith was the first to serve as assistant keeper at Tawas Point, with his official start date being March 16, 1900. In 1905, brush and stone revetments were built along the lakefront near the fog signal building, and 1,300 willows were planted to curb erosion. Also that year, an old abandoned boathouse was fixed up to serve as a temporary dwelling for the assistant keeper.

In 1908, the Lighthouse Board noted: The assistant keeper lives in an unsuitable wooden hut on the light-house reservation. He is married, and now badly housed. No rentable houses exist in the vicinity, but ample land is now owned by the United States, upon which a suitable dwelling can be constructed. Despite repeated requests for funds to construct one, a second dwelling was never built at Tawas Point. Rather, in 1922, $9,121 was finally expended in relocating the dwelling from Ecorse Light Station in Detroit River and remodeling it for the use of the assistant keeper.

As it owned over seventy acres on Tawas Point, the Lighthouse Service decided to launch a reforestation project on the reservation to produce timber for construction uses. Roughly 20,000 Norway pines were planted in October 1927 on a thirteen-acre parcel. Trees planted behind hillocks of sand or in beach grass fared much better than those fully exposed to the wind coming off the lake. By the end of 1922, the surviving trees were between two and three feet in height, and the project, which was carried out with the cooperation of the forest service, was deemed undoubtedly a success.

On May 22, 1915, the intensity of Tawas Point Light was increased through the introduction of an incandescent oil vapor lamp. An air diaphone, powered by oil-engine-driven air compressors, took the place of the steam whistle on October 27, 1928.

Tawas Point Lighthouse was staffed by civilian lighthouse keepers from 1853 until 1953, when Mathew Storback, who had been keeper at the station for six years, was transferred to Presque Isle Lighthouse and Leon DeRosia, a coastguardsman, was placed in charge of the light.

The State of Michigan acquired the lighthouse from the Coast Guard in 2002, and that same year Building Restoration Inc. of Kalamazoo was contracted to install a metal shingle roof on the dwelling and paint the tower. Along with this work, an old garage next to the lighthouse was remodeled to serve as an interpretive center, and the wooden assistant keepers dwelling was razed. With the outside spruced up, work began on restoring the interior. The upper floor of the dwelling was converted into an apartment where modern keepers can pay to serve one or two-week stints as modern, tour-giving lighthouse keepers. Each of the rooms in the lower story of the dwelling has been restored to reflect a different decade in the stations history.

In October 2015, the Coast Guard notified the public of its intention to deactivate Tawas Point Lighthouse, remove its fourth-order Fresnel lens, and place a modern beacon on a tower, located a half mile from the lighthouse, that supports a fog signal. While those responsible for Tawas Point Lighthouse prefer to keep the lens in the tower, the Coast Guard feels removing historic lenses from lantern rooms, where they are exposed to damaging light, and placing them in museums is the best way to preserve them.

For a larger map of Tawas Point Lighthouse, click the lighthouse in the above map.

The lighthouse is open from May through mid-October. Click here for hours and to find out what days tower tours are available. The tour offers the opportunity to walk to the top of the tower for a spectacular view of Tawas Point. For tour information, call (989) 362-5658.

The lighthouse is owned by Michigan Department of Natural Resources and is managed by Tawas Point State Park. Grounds open, dwelling/tower open in season.