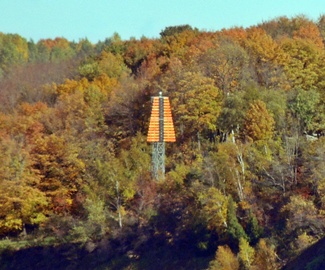 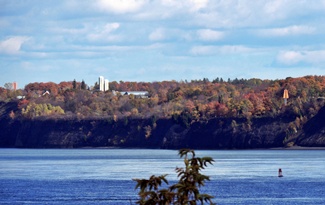 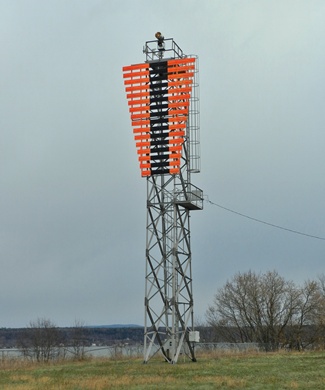 Abreast Île Richelieu, the St. Lawrence River narrows to roughly a quarter of a mile at low tide, and the current here flows at a rate of five-and-a-half knots at ebb tide. This constriction in the river is known as Richelieu Rapids, and in 1816, it became one of the first spots on the St. Lawrence River between Montreal and Quebec City to be marked by a light Île Richelieu (LIslet Richelieu) Lighthouse. In the 1890s, a new channel was dredged through Barre à Boulard (Boulard Bar), just downstream from Île Richelieu, necessitating the establishment of a new range. During the winter of 1898  1899, a lighthouse was built on Richeleu Islet Reef, 1,140 feet north of Île Richelieu Lighthouse, to serve as the front light of Barre à Boulard Range. The following description of this new range was published by the Department of Marine in 1899:

[The front lighthouse] is an octagonal, wooden, pyramidal tower 37 feet high, surmounted by a 7 ½ feet iron lantern, standing upon a pier built of 3/8-inch steel plate casing, 24 feet in diameter at the base, 24 feet in diameter at top and 20 feet high, with a projecting nose of steel plate up stream forming an ice breaker, the whole filled with stone and concrete. The pier is painted red brown, and the tower is painted white, with the iron lantern and the lantern base red. The top of the pier is 10 feet above high water mark. The building of the foundation was a difficult piece of work, as the tides covered the site from 5 to 6 feet deep at high water springs. This made the work of preparing the foundation slow and difficult and added to its cost.

The light is fixed red, elevated 40 feet above high water mark, and should be visible 7 miles from all points of approach by water. The illuminating apparatus is dioptric, of the seventh order.

To range with this lighthouse in the axis of the channel a small light building, showing a face 7 feet wide by 10 feet high painted white, with a black stripe 3 ½ feet wide down the middle of the side facing the channel, was erected. From a window in the face of this building is shown a fixed red catoptric light, elevated 118 feet above high water mark, which should be visible 11 miles in, and over a small arc on each side of the line of range. This building is located 10,400 feet N. 70 E. from the lighthouse on the reef.

It stands on the hill side at Platon Point and is rendered more conspicuous by having erected over it the beacon which was formerly the front day beacon on the Platon. This was moved 50 feet southwardly from its old position. The back day beacon has been taken down. The work was done under the superintendence of Mr. W. H. Noble, foreman of works, at a total cost of $5,057.25, and the new lights were put in operation on April 29, 1899.

On July 1, 1903, the range lights were changed from fixed red to fixed white to increase their visibility. At this time, the four-year-old rear tower was replaced with a square, steel, skeletal tower with sloping side and surmounted by an enclosed wooden watchroom and a square wooden lantern room. The side of the tower facing the channel was covered in wooden slatwork, painted white, to render the structure more conspicuous during the day. This new tower stood sixty-one feet tall and exhibited a light at a height of 160 feet above high water mark.

With this improvement in Barre à Boulard Range, the Department of Marine believed that Île Richelieu Lighthouse and Platon Range could be discontinued, but when it deactivated theses lights on July 1, 1903, mariners were quick to complain. At the solicitation of river pilots, these three lights were relit on October 22, 1903, though mariners were warned to not be guided by them as they did not correctly mark the improved shipping channel.

The keeper of the front range light was paid significantly more than the keeper of the back range light due to the difficulty in accessing the tower on Richelieu Island Reef. In 1923, L. Bernier earned an annual salary of $420 for looking after the front light, while O. Lemay was paid just $150 for keeping the rear light.

The wooden octagonal tower that originally housed the front light of Barre à Boulard Range before becoming Île Richelieu Lighthouse was reportedly torn down in 1971. Today, two lights are shown from a white and fluorescent orange box mounted atop the circular stone base built for the Barre a Boulard front range light: a fixed yellow light visible on a bearing of 54° and a fixed green light between 160° and 250°. The green light appears to mark Île Richelieu and the rocky reef that extends north of it.

In 1992, a square, skeletal tower replaced the square pyramidal tower with an enclosed upper portion that had housed the rear light of Barre à Boulard Range from 1903 to 1968 before being repurposed as the front light.

For a larger map of Barre à Boulard Range Lighthouse, click the lighthouse in the above map.

A distant view of the range lights can be had from across the river on the wharf at Portneuf. The rear range can be seen alongside QC-132 west of St. Croix.

The range lights are owned by the Canadian Coast Guard. Grounds/towers closed.