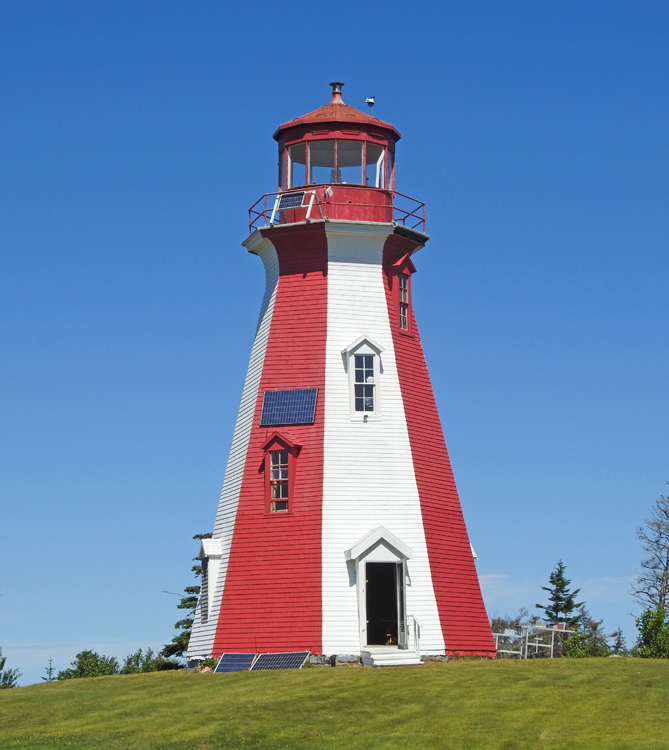 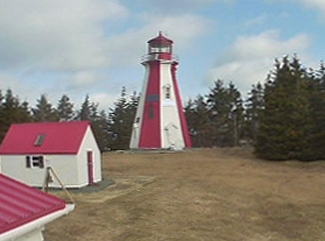 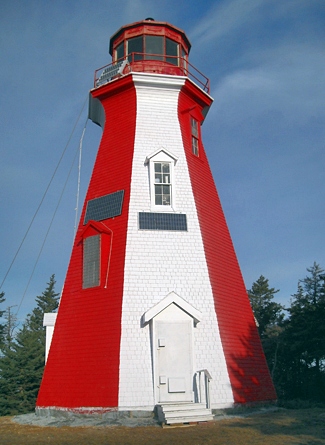 Early in the 1990s, Bill Baker, a man with many titles including broadcaster, executive, academic, explorer, and author, started looking for an island escape  not an extended getaway, but an island to call his own. Having stood on both the North and South Pole, he was well acquainted with solitude and its rejuvenating powers. A Canadian friend and colleague suggested that Baker look north to Nova Scotia, where owning one of its over 3,500 islands doesnt require a lifetime of wages.

Baker grew up on the shores of Lake Erie and acquired an affection for water and lighthouses, so when he learned of an island in Nova Scotia with a lighthouse, he rushed to check it out. After taking a short boat ride and hiking to the islands summit with a bad back, he found a dilapidated dwelling and a lighthouse that received only the most essential upkeep.

Once I saw it, my back suddenly started feeling better, Baker said. And that was that. We had to have it. People need a psychologically private and safe place where things are happy and good, which is what an island and lighthouse represent. Its a place to go and think big thoughts. Nova Scotia sounded wonderful and mysterious. And it is.

Bill Baker and his wife Jeannemarie have owned Henry Island since purchasing it from the Middleton family in 1992.

The community of Port Hood is located just south of the westernmost point of Cape Breton. A mile offshore from Port Hood lies Port Hood Island, and a mile south of it, is triangular Henry Island. Spacious St. Georges Bay is situated between Cape Breton and the Nova Scotia mainland, and its southern end leads to the Strait of Canso. A lighthouse was built at Port Hood in 1853 to mark the harbour and the northwest side of the entrance to St. Georges Bay, and in 1861, Cape George Lighthouse was built to mark the northwest side of the mouth of bay. Over forty years later, a lighthouse was built on Henry Island to better mark the northeast side.

The Department of Marine announced the completion of Henry Island Lighthouse in its 1902 report:

A lighthouse, erected on the highest part of Henry island, at the entrance to Port Hood, will be put in operation about December 1, 1902.

The tower is an octagonal wooden building, with sloping sides, surmounted by a red polygonal iron lantern. The tower is 53 feet high from its base to the vane, on the lantern, and its faces are painted alternately white and red. The keepers dwelling stands 165 feet south from the lighthouse, and is a wooden building painted white.

The light will be a group-revolving white light, having three periods of maximum intensity, with intervals of ten seconds between their points of greatest brilliancy, followed by an interval of forty seconds, during the greater part of which the light will be eclipsed, the apparatus completing a revolution, or phase, in one minute. It is elevated 240 feet above high water and should be visible 22 miles from all points of approach by water. The illuminating apparatus is catoptric.

The work was done under contract by Mr. Jos. McDonald, whose contract price was $3,489.

John A. McLennan was appointed the first keeper of Henry Island Lighthouse on July 21, 1903 at an annual salary of $400. Daniel A. McLennan replaced John in 1907 and served until 1944, when he was suspended for having farmed out his lightkeeping duties. Charles G. McLennan was then appointed keeper and looked after the light until his retirement in 1961.

The wooden, octagonal Henry Island Lighthouse was built in a unique manner, without the use of support beams at each of the corners. Rather, three-inch-thick by ten-inch-wide planks were stacked on top of each other and interlocked at the corners to form ten-inch-thick walls that taper from an inside diameter of twenty-three-and-a-half feet at the base to thirteen feet near the top. Four vertical, pedimented windows spiral up the south side of the lighthouse, adding textural interest to the tower.

Stanley Morrison, the last keeper, served from 1961 to 1962, when the illuminant was changed to acetylene gas so the operation of the light could be automated. James R. McDonald then served as a non-resident caretaker of the lighthouse from 1963 to 1967, after which the Coast Guard established regular inspections of the station.

A solar panel was affixed to the southwest side of the gallery railing in 1985 to charge twelve large single-cell batteries that fed electricity to a new beacon in the lantern room. A sun-switch turned the light off during daylight hours.

Henry Island Lighthouse was declared a recognized federal heritage building in 1991 in part for its unusual plank on plank construction, and the fine-scaled cove boarding of the cornice.

In 2015, the National Trust for Canada and the Nova Scotia Lighthouse Preservation Society launched This Lighthouse Matters, a crowdfunding competition that gave organizations and communities in Nova Scotia the chance to compete for cash prizes to preserve their beloved lighthouses. Over 219,000 votes were cast in the online contest, and Henry Island Lighthouse came in second place in the Ebb Tide category, winning $20,000. Henry Island Lighthouse Preservation Society promptly used the money to re-shingle and stain the tower.

When Bill Baker purchased the island, the keepers dwelling was in poor shape, having been vandalized and sprayed with graffiti. Bertie Smith, a local handyman, restored the dwelling while maintaining its rustic heritage. Modern conveniences were eschewed in favour of an outhouse, a rainwater cistern, and a propane refrigerator and stove.

Nova Scotia is a place where we can centre ourselves, Baker said. You know, you cant see the stars in New York. I hadnt seen them in years until I found Henry Island. Sometimes we just throw our blankets out and stare at the sky. I may only get there for a few weeks each summer, but I go there every day in my mind.

For a larger map of Henry Island Lighthouse, click the lighthouse in the above map.

Tours to Henry Island Lighthouse have been offered in the past.

The lighthouse is privately owned. Grounds/tower open during tours to the island.