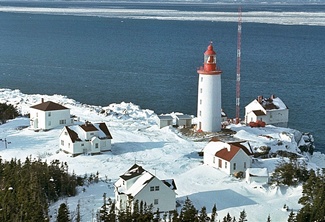 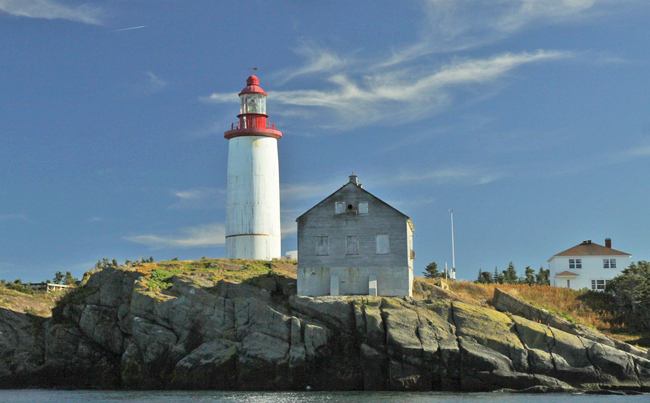 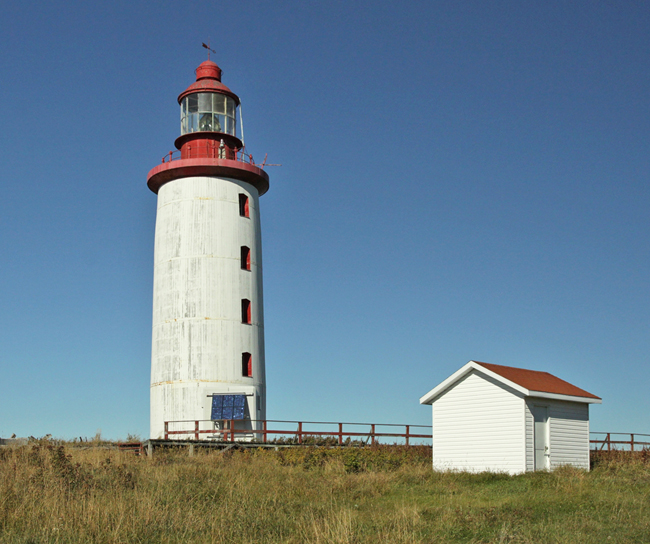 Many islands, tricky obstacles for marine pilots, dot the St. Lawrence River upstream from Pointe au Pere. One of these is Île Bicquette, located farther out in the river than its larger neighbour Île du Bic.

As early as 1828, mariners petitioned for a lighthouse to mark the island, stating that there was not a more conspicuously adapted or appropriate spot for the establishment of a lighthouse than Île Bicquette. Vessels running up the river at night would give the island such a wide birth that they would often run aground at Portneuf or Mille Vaches on the north shore. Fifteen years would pass before the petitioners request was fulfilled.

The massive, round masonry tower at Île Bicquette, modeled after the lighthouse at Île Verte, was constructed on the west point of the island under the direction of Joseph Archer. It stands seventy-four feet tall with a focal plane of 112 feet and began operation in 1844. The original light was a revolving catoptric white light with twenty-one flat-wick No. 1 lamps and twenty-one inch reflectors, and had a signature of a flash every two minutes. A cannon at the station was fired every half hour during fog and snowstorms.

On June 7, 1853, the Scottish barque Berbie ran aground on the rocks near Île Bicquette. James Lawrence, one of the passengers on board, immigrating to Canada with his wife, Jane Findlay, wrote a letter to the Quebec Morning Chronicle describing their ordeal and the relief provided by Keeper John Hammond, the first keeper of the light.

Mr. Editor, Pray Sir: spare room in your widely circulated Journal for the following short need of grateful approbation: The undersigned passengers on board the barque Berbice of Aberdeen, Captain Elliot, desire to give public expression of the extreme gratitude they feel for the unbounded kindness shown them by Mr. Hannon, keeper of the Lighthouse on the Island of Becquet and his excellent wife when misfortune cast them upon their shores. On the 7th June just at midnight, blowing hard with a dense fog, our ship struck on the rocky borders of that Island and remained fast, rolling heavily on her hard lee; as the tide receded she fell over upon the rocks on her broadside. Our dexterous and intrepid commander, seeing a perilous situation, immediately launched his boats, coolly commanding every moment and although the sea was running high and the whole scene enveloped in pitchy darkness, he succeeded without the slightest confusion in safely landing the women and children and finally the whole of us upwards of one hundred in number. There on that Island Becquet we met the extraordinary kindness of Mr. Hannon and his wife, which we now desire to acknowledge and record. Humanity was there exhibited in its purity; their home and their every appendage were thrown open for our use and comfort without restriction. That God may condescend to bless them is the heartfelt wish of us all.

While traveling to the island on March 2, 1859 to prepare the station for the opening of navigation, Keeper Hammond and his assistant drowned when their boat was punctured by ice floes. A Mr. Fortier was appointed temporary custodian of the light, and he took his small dog with him to the island. Alone in the tower at night, Fortier heard thumps and squeaks emanating from the upper part of the tower. He tried, without success, to reason away the sounds, and it was with great trepidation that he faced the subsequent night in the tower. The noises started again, only accompanied this time by moans and cries. The ice was too thin for Fortier cross to the mainland, or he would have left the tower at once. The third night was filled with the same infernal noises, but fortunately the cold of the previous twenty-four hours had frozen the river, providing his escape. Accompanied by his dog, Fortier fled the station and never set foot on the island again.

In 1866, the exterior of the tower was clapboarded to protect the stonework. The following structures, in addition to the lighthouse, were on the island in 1876: a stone dwelling house, a stone powder magazine, a wooden gun house, and a wooden storage shed at the landing. In 1883, a new dwelling was constructed, and a modern dwelling was built in 1962.

Thomas Lebel was the keeper in 1875 when for some reason all the lamps in the tower caught fire. The great heat caused all forty-eight glass panes in the lantern room to break, and Lebel barely escaped with his life. Showing the importance of the light, a steamer was immediately dispatched with new lamps, and by the next night, the light was in operation again. The light was out for only eight hours.

The fog cannon was replaced by a foghorn operated by steam and compressed air in 1889. The horn blasted for ten seconds every minute and was housed in a building located 100 feet east of the lighthouse tower on the north side of the island. This system was replaced in 1908, when a three-inch diaphone plant was installed in a new wooden fog alarm building situated near the lighthouse.

A third-order Fresnel lens, manufactured by Bernier, Bénard and Turenne, was installed in the lantern room in 1909, changing the lights characteristic to a white flash every three seconds. Keeper Maurice Thibault remembered the task of winding up the weights, coming in at over several hundred pounds, which drove the lamps rotation mechanism. At Bicquette, it took 810 turns and it took ten minutes to raise the weight. It was tough . . . there were three speeds on the crank, depending on the guys strength.

In 1890, an iron water tank with an 800 gallon capacity was supplied to the station. In the early 1950s, this was replaced by a cement tank in the basement of the keepers house. Rainwater from the roof was channeled to the tank, which looked like a swimming pool and took up half of the basement floor space, through a series of downspouts. The water would freeze during the winter, and keepers complained of stomach ailments and rashes after drinking the water. These effects were most likely due to the large bird population which lingered on the dwellings roof.

The light, which remains operational, was electrified in 1970 and then automated in 1987. Mariners see either a white flash every six seconds and/or a red flash every two seconds depending on the direction of approach. There is currently a weather station at the site.

Île Bicquette is now managed by Environment Canada (Îles de lEstuaire National Wildlife Area) and is part of the Bic Conservation Park, whose purpose is protecting the flora and fauna of the St. Lawrence Estuary.

The fog alarm building was declared a Recognized Federal Heritage Building in 1996, an honour the lighthouse received in 1988.

For a larger map of Île Bicquette Lighthouse, click the lighthouse in the above map.

Île Bicquette Lighthouse is best seen by boat, but a very distant view is possible from Pic Champlain in Parc National du Bic. You can hike to the top of the peak (it is a fairly steep ascent), or take a shuttle to the top, or sign up for a minibus tour that includes transportation up to Pic Champlain lookout.


We took a sunset minibus tour that concluded with a stop at Pic Champlain lookout just in time for sunset. The very distant picture of the lighthouse seen above would probably have been better with more light, but the tour was a great way to end the day. Here is a view of the park's many islands as seen from the lookout.

We had a private tour, as no one else had signed up for the sunset tour that day. Our tour guide, a college student studying forestry, spoke very good English, and besides informing us about the various features of the park and names of all the islands, he also caught us up on Canadian politics, or at least his take on them. Im all for Quebec protecting its rich French heritage, as it provides for some great diversity in Canada, but one question I wish I had asked our guide is Why are the provincial parks in Quebec called national parks and not provincial parks like in all the other provinces? It just made it confusing to determine which parks were run by Parks Canada and which ones were run by SEPAQ.