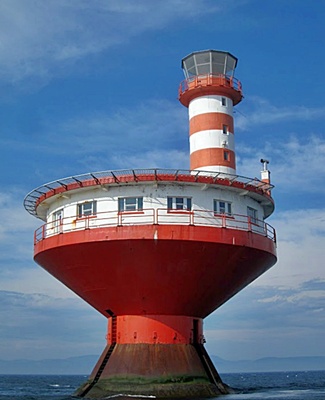 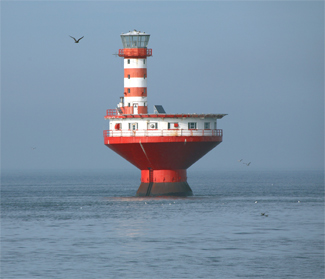 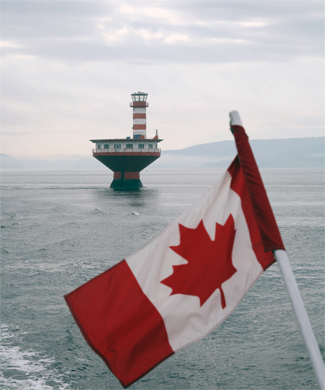 The first structure to span the mighty St. Lawrence River was the Victoria Bridge, named in honour of Queen Victoria. When completed, the bridge was the longest in the world and connected Montreal to the south shore city of Saint-Lambert. Queen Victoria was invited to open the bridge, but she declined, sending instead her son, Albert Edward, the Prince of Wales. The bridges inauguration occurred on August 25, 1860, but one week before this, the H.M.S. Hero, on which the Prince traveled to Montreal, ran onto a shoal off Tadoussac. While the Prince didnt have the bridge named in his honour, the shoal was. Previously absent from the Admiraltys maps, it was named Prince Shoal (Haut Fond Prince), by her Majestys cartographers. At the opening of navigation in 1905, the iron Lightship No. 7 replaced a gas buoy that had been marking Prince Shoal. The lightship, which was painted red with the words Prince Shoal and No. 7 displayed in white letters on its sides, exhibited white lights from its two masts and a red light on a stay strung between them. In thick weather, the vessels steam whistle would sound a twelve-second blast in each minute. The ship was also equipped with a submarine bell that would strike the lightships number in this manner: seven strokes spaced by two-seconds, followed by a ten-second interval.

When White Island Reef Lighthouse commenced operation in 1956, Lightship No. 20 was transferred from that station to Prince Shoal, and Lightship No. 7 was withdrawn from service. Lightship No. 20 served at the station for five years before designs were drawn up in 1961 for a permanent structure to mark Prince Shoal. This unique, hourglass-shaped structure, built at Champlain Drydock in Levis, Quebec, was dubbed the yo-yo by those working on it. Consisting of two cones joined at their vertices, the lighthouses measurements, in feet, were 203  78 ½ - 283. At 5:30 a.m., on August 6, 1963, the metal structure began its 105-mile-long journey downriver, guided by four chartered tugboats.

After battling fog and storms for fifty hours, the lighthouse arrived at the shoal, and when the tide was right, the caissons valves were opened, allowing water to enter and slowly sink the structure, over the course of three hours, onto a specially built foundation on the rivers bottom. 8,000 tons of crushed rock were then fed into the caisson, replacing the water, and to this was added 50,000 cubic feet of cement. After steel sheet piling was driven around the base of the caisson, work was suspended for the season.

The towers twelve-foot-tall upper section, housing an engine room and living quarters for the keepers, was built on site in 1964. Atop this circular level was mounted a thirty-nine-foot tower, with a diameter of twelve feet, and a helicopter-landing pad. Standing in thirty-eight feet of water, the wasp-waisted lighthouse has been dubbed La Toupie (The Top) by locals. The slope of the lower cone helps break up ice, while the angled upper section serves to disperse the energy of the waves that strike the tower. When activated in the summer of 1964, the towers 33,000,000 candlepower light was reportedly the strongest in North America.

In the early hours of Christmas Day, 1966, Yvanhoé Gagnon was serving the night watch at Prince Shoal, while the other two keepers, Roger Lagacé and Claude Fraser, were sleeping. Having previously served as a cook at Hotel Tadoussac, Yvanhoé was putting the finishing touches on the keepers Christmas meal that included stuffed turkey, chocolate cake, and ice cream. Distracted by his preparations and the constant drumming of the generator, Yvon didnt notice that a strong Noreaster was starting to blow, but when head keeper Lagacé came on duty at 4h00, he immediately took note of the deteriorating conditions.

The stations anemometer was recording wind gusts of up to sixty knots, its maximum reading. With the tide moving in the opposite direction of the wind, mountainous waves were starting to form in the river, but Prince Shoal Lighthouse was designed to withstand twenty-five-foot waves, and those outside were only around fifteen feet.

The housing floor is located at Level 76, seventy-six feet above the base of the tower, or roughly thirty-eight feet above the water. The tower can be accessed from the helipad or through a double set of steel doors in the narrow portion of the tower at Level 51. Around dawn, a thirty-foot wave burst open the stations inch-think steel doors, barred by a two-inch plank, and sent water rushing into the tower. Claude Fraser had been jolted awake a time or two by the storm but was able to fall back asleep until the metallic grating of the damaged doors swinging on their hinges made him realize this was no ordinary storm.

A while later, a satanic noise rose from the lower portion of the tower. Fraser descended the towers spiral staircase to investigate and found that the furnaces two burners, at Level 64, had been doused by sea water. When the waves started to beat against the brick walls of the housing level, Lagacé figured it was time to alert the Coast Guard to their situation. Using the stations radio, Lagacé reached Jos. Therrien, the keeper at Pointe Noire, who spent his winters in Tadoussac and stayed in contact with his colleagues at Prince Shoal using a radio telephone. Therrien could sense the anxiety in Lagacés voice, floors flooded, heating stopped, doors and frames torn up by the waves After dozens of attempts, Therrien finally reached Captain George Gaudreau, the officer in charge of the Quebec district, who, after grasping the seriousness of the situation, said he would try to dispatch the ice patrol helicopter or the buoy tender Simon Fraser as soon as he could assemble a crew.

Just as windows were starting to break in the housing level, the crew received word that help could not be sent due to the weather. The only good news was that the stations three generators, which supplied power to the lighthouse, were still working, and that Christmas dinner was ready. But this anticipated pleasure was soon interrupted by alarms and flashing lights from the towers control panel. A threat of a short circuit had been detected, and Fraser was forced to cut the power to the lighthouse.

At 13h00, Legace retired to his room for a break. There is just an hour left until high tide. After that the sea level has to go down, he assured himself. Just then a wave crashed through the window of his room. A second one ripped out the frame, and a third tore down part of the cement wall separating his room from the adjoining one.

At high tide, the waves were breaking over the helicopter pad; the lighthouse was underwater! The waves struck the lighthouse with such force that spray froze on the light tower, forming a shell of ice, six to eight inches thick.

The radio communication between Prince Shoal and Therrien was picked up by some AM radios in Tadoussac, and curious listeners alternated between Christmas hymns and the drama unfolding offshore. At 19h30, radio contact with Therrien was lost, but by 21h30 the vibrations had become less intense, and the whistling of the wind seemed to have abated. By 23h30 the swells were no longer sweeping over the housing floor, and hope of surviving the twenty-four-hour battle with the river started to rise.

With dawn, the river was calm and peaceful, but the scars of the Christmas Day saga were evident everywhere. At 15h30, a helicopter arrived and took the weary men to Tadoussac. As Léon Bernard put it: For Claude Fraser, Yvanhoé Gagnon and Roger Lagacé, Santa Claus came by helicopter  36 hours late.

The intense vibrations caused by the waves had torn the towers xenon lamps from their supports, and the lighthouse remained dark until a temporary light was established on January 11.

With some hesitation, the three keepers returned to their offshore station the next spring, but after fifteen days Roger Lagacé gave up lightkeeping for good and returned to his native Gaspésie, where he began a new career in the hotel industry. Claude Fraser left the tower a few months later, taking an assignment on a Coast Guard vessel. Only Yvanhoé Gagnon, the rookie keeper, stayed on the lights, later serving at stations on the North Coast and Anticosti Island. Prince Shoal was automated in 1987, leaving Île Rouge the only staffed station in Quebec.

For a larger map of Haut-fond Prince (Prince Shoal) Lighthouse, click the lighthouse in the above map.

A distant view of Haut-fond Prince Lighthouse can be had, on a clear day, from Tadoussac or from Pointe Noire. Whale watching boats from Tadoussac and Baie-Sainte-Catherine often pass by the lighthouse. Trips are available from Croisiéres AML and Croisières Groupe Dufour.


After our whale watching narrator had given her introduction, I approached her and asked if the boat typically passed near Prince Shoal Lighthouse. She offered to talk to the captain to make sure we could get a good picture of the lighthouse, and he provided a real close encounter with the unique tower. He positioned the nose of the boat right up next to the narrow portion of the tower, and then had me go up front on the lower deck so I was under the upper section of the lighthouse. I probably could have touched the lighthouse if I had tried.

But wait, isn't the lighthouse supposed to warn ships away from dangerous Prince Shoal and not attract them to it?

While the weather wasn't the best for taking pictures, we sure did see a variety of whales. We encountered numerous minkes and belugas, a mother humpback named Tic Tac Toe and her calf, and a few finback whales.