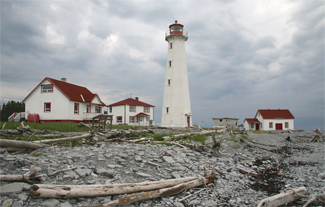 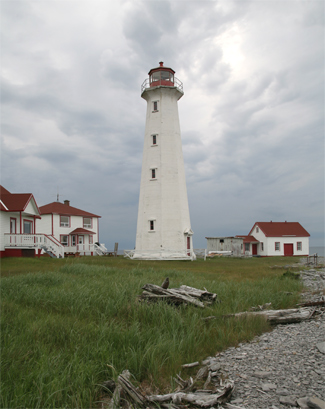 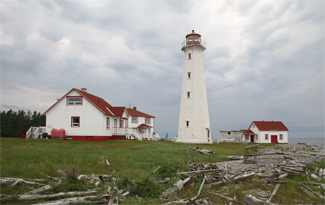 In 1534, Jacques Cartier made his first voyage to the Gulf of St. Lawrence, and, while there had been many foreign fishing vessels before him, Cartier is known today because of his fondness for giving French names to the islands, rivers, and mountains and planting crosses along the way. Cartier sailed toward Anticosti Island, thinking it was a peninsula of the Gaspe, and on July 25, 1534, recorded his initial thoughts of the island, The whole of the coast is flat and the most bare timber we have seen, with beautiful fields and meadows marvelously green.

Rounding the eastern tip, Cartiers two small caravels skirted along the north shore until they saw a prominent cape, which, on August 1, 1534, they set out to explore in longboats. Cartier wrote, When we had rowed along the said coast for some two hours, the tide began to turn and came against us from the west so violently that it was impossible to make a stones throw of headway with thirteen oars. And we deemed it advisable to leave the longboats, with part of our men to stand guard over them, and for ten or twelve of us to go along the shore as far as that cape where we found that the coast began to turn off towards the southwest.

Once back to the ships, Cartier decided that given the heavy downstream winds and the strong tidal currents, they would not gain much ground before the seasonal easterly winds set it. It was time to turn back for home, ending five months of exploration of the Gulf of St. Lawrence.

The following year, Cartier returned, and on August 14, 1535 commented on the great number of whales he saw near that cape. This time, he named the prominent cape, Cap de Rabast, an old French term meaning, the place of turning back.

The invention of the steamship in the nineteenth century allowed shipping routes to pass on the north side of Anticosti Island and through the Strait of Belle Isle, a shorter and less foggy route than its southern counterpart. Prior to that, fishing fleets and sailing vessels had primarily used Honguedo Strait, which lies between Anticosti Island and the Gaspé Peninsula.

To assist with the increased marine traffic in Jacques Cartier Strait, three lighthouses were established along the north shore of Anticosti Island in 1919 at Pointe-Carleton, Cap-de-la-Table, and Cap de Rabast, also known as Pointe Nord (North Point). These lighthouses feature the same architectural design: a white octagonal reinforced concrete tower with a flared cornice and a red multi-sided lantern. Enhancing the design of the towers are a pedimented cap over the doorway and triangular lintels over the vertically-aligned windows. Cap de Rabast Lighthouse stands seventy-two feet tall from base to vane and originally displayed three white flashes, at intervals of four seconds, followed by an eclipse of twelve seconds. A diaphone foghorn, housed in a fog alarm building near the tower, sounded two, two-and-a-half-second blasts, spaced by five seconds and followed by sixty-five seconds of silence. A double dwelling was also built in 1918-1919 but was later replaced by separate residences.

The 1920 Annual Report of the Department of Marine and Fisheries stated: The three light and fog alarm stations on the north shore of Anticosti Island at Cap De Rabast, Charleton Point, and Table Head, built during the war, are now in permanent operation, with the result that with their aid many vessels now pass on the north side of the island, shortening the distance between Quebec and the strait of Belle Isle, inward or outward.

Gerard Barriault, who grew up at the station while his father, Joseph Barriault, was keeper, recalls life there in the 1930s. At the time, the station consisted of the light tower, the duplex that had been converted into an eight-bedroom single home, the fog alarm building, a workshop, a stable, a chicken coop, a food shed, a large garden, and a fenced area for their horse. Barriault writes, There is a lake half a mile inland; not too many fish in it but a good spot for duck and goose hunting. We have a wooden boat hiding there. If we decide that we want some small trout we go to the old camp river about a mile west, but if we prefer salmon, we pack a lunch and go to McCarthy to catch a few trout and salmon, spend the night in the hunters camp and return home the next morning.

Life at the station was isolated. With no overland road, the keepers were thirty-five miles by boat from both Port Menier and Havre St. Pierre on the mainland. During the winter, the mail periodically arrived by air, with pilots throwing out mailbags when above the lighthouse.

W.A. Calladine, reported in 1953 in the News of the Department of Transport what it took to deliver supplies to the station:

Rock and boulders prevent landing supplies directly on shore and barrels of oil are therefore tossed overboard from the surf boat and carefully maneuvered with pike poles in the hands of crew members standing in the water over their knees. Brought to reaching distance, the barrels are then cautiously rolled up on the shore to the oil storage sheds. Coal, provisions and other supplies are carried from the small boats on two-man litters.

The light was automated in 1980. Anticosti remains an isolated island, being visited by just a few summer tourists and autumn deer hunters. The Cap de Rabast station, under the care of Pourvoirie Lac Geneviéve dAnticosti, accommodates some of those visitors by offering lodging in the two keepers dwelling. The light tower was declared a Recognized Federal Heritage Building in 1990.

For a larger map of Cap de Rabast (North Point) Lighthouse, click the lighthouse in the above map.

Overnight stays at the lighthouse are offered by Pourvoirie Lac Geneviève D'Anticosti.


We saw some very diverse weather during our first day on Anticosti Island. It actually started that morning at the Mont Joli airport, where we were supposed to catch a flight to the island. We showed up the obligatory 90 minutes before our flight, even though we knew it was a small airport, and then had to wait for a few hours as Anticosti Island was fogged in. The kind SEPAQ check-in lady finally told us our best bet was to fly to Sept-Iles and then continue on to Anticosti aboard a larger plane.

We thus boarded a small plane and headed off to Sept-Iles. It was quite clear in Mont Joli and remained so until we reached the north shore of the St. Lawrence. As we descended for our landing, I kept waiting for the clouds/fog to clear, but it only did when we were right above the treetops. At this point, the co-pilot revved the engines and started to climb - we had aborted the landing. Once we had gained more altitude, the co-pilot told us that they would attempt one more landing in Sept-Iles, and then return to Mont Joli if necessary.

Sometimes it is a good thing when you can't see into the cockpit and read the altimeter and fuel gauge and realize that the pilots are staring into the same blanket of whiteness that you are. The four passengers aboard sat white-knuckled as the plane maneuvered through the fog and lined up for another landing. This time, we managed to land, and afterward I asked the pilot when the fog broke. I was expecting to hear something like 500 feet and so was a bit shocked when he said 150 feet.

After a few hours in Sept-Iles, we finally boarded another plane and took off for Anticosti. I was expecting another tense flight, but when we arrived over the island, the skies were mainly clear.

After picking up our four-wheel-drive truck at the airport and stopping for groceries in Port Menier, our first stop was at the Baie Ellis Range Light. We still had some blue sky at West Point, but by the time we made it to Cap Rabast, the sky was filled with the interesting clouds seen on this page. It was one of those special peaceful moments at Cap Rabast, where nature seemed to be holding its breath, but I managed to break it after several minutes when I slipped on a log and scared the many Eiders paddling along just offshore. By the time we made it to our cabin that night, we were caught in a heavy downpour accompanied by thunder and lightning - quite the welcome to Anticosti Island.