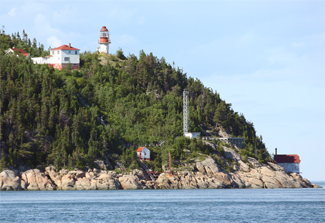 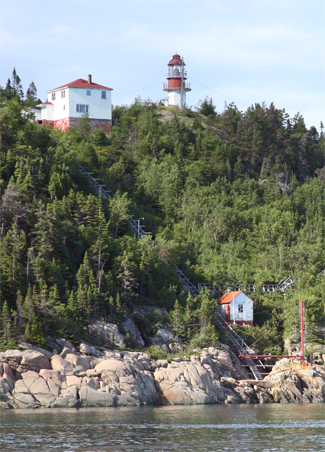 A string of long narrow islands located roughly midstream between Saint-Siméon and Rivière-du-Loup divide the St. Lawrence River into a north and south channel. These islands include White Island, Hare Island, and Strawberry Island.

In 1862, Brandy Pot Lighthouse and Long Pilgrim Lighthouse were established to mark, respectively, the west and east sides of the south channel. When William P. Anderson, Chief Engineer of the Department of Marine, toured the lighthouses along the St. Lawrence River in 1890, he noted that pilots had shown a remarkable disinclination to use the clear channel north of Hare Island due to its greater current and lack of good anchorages. Masters of seagoing ships, however, favoured the north channel, and Anderson recommend that lights be established to mark it.

A lightship was stationed off White Island starting in 1893 to mark the northeast side of the north channel, and the following year, Cape Salmon Lighthouse was established to mark the southwest side of the channel. These two lights were apparently insufficient as in 1908 the Marine Department announced its intention to erect, during the coming season, a reinforced steel concrete lighthouse tower, wooden fog alarm building, and double dwelling house, at Cape Dogs (Cap de la Tête au Chien), a precipitous headland located five miles northeast of Saint-Siméon.

To expedite the hauling of materials from the landing place to the various construction sites on the cape, roadways were blasted out of the rock, and an inclined railway was constructed on trestlework. A powerhouse was built at the landing to run the derrick and trams, and a concrete wall was built at the mouth of a large gorge to create a dam for storing fresh water.

An octagonal tower surmounted by a circular metal lantern room was constructed high atop the cape, where it had a focal plane of 207 feet. A third-order, double-flashing Fresnel lens produced the following repeated light signature every five seconds: 0.25-second flash, 0.75-second eclipse, 0.25-second flash, 3.75-second eclipse. The original illuminant was petroleum vapour burned under an incandescent mantle, but the light source was likely converted to electricity in 1952, when the dwellings and buildings at the station were electrified. In 2011, the rotation mechanism for the lens broke, and the Canadian Coast Guard mounted a modern optic on a gallery outside the lantern room that has the same characteristic as the lens, which remains inside the lantern room.

A fog alarm, housed in a building close to the shore, sounded a five-second blast in every fifty seconds when needed. The present fog signal building was built in 1950, but the fog alarm is no longer active.

One of the two residences now standing at the station was built in 1957, and the other was added in 1962.

For a larger map of Cap de la Tête au Chien (Cape Dogs) Lighthouse, click the lighthouse in the above map.

Cap de la Tête au Chien is best viewed by boat, but a very distant view of the lighthouse can be had from the Rivière-du-Loup - Saint-Siméon Ferry. The whale watching cruises out of Saint-Siméon typically pass in front of the station.


If your main objective is to see whales, you are probably better off taking a boat out of Tadoussac or Baie-Sainte-Catherine, as most of the whales seem to be off the mouth of the Saguenay River, however, if you want to see Cap de la Tête au Chien Lighthouse, taking a boat out of Saint-Siméon is the way to go. These white blobs in front of the station aren't icebergs but rather beluga whales. Besides numerous belugas, we also saw a few minke whales during the excursion.