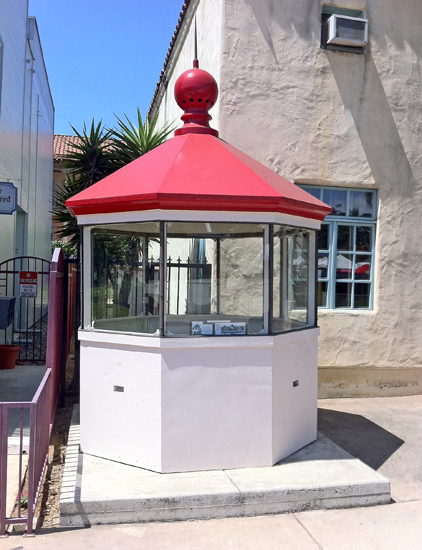 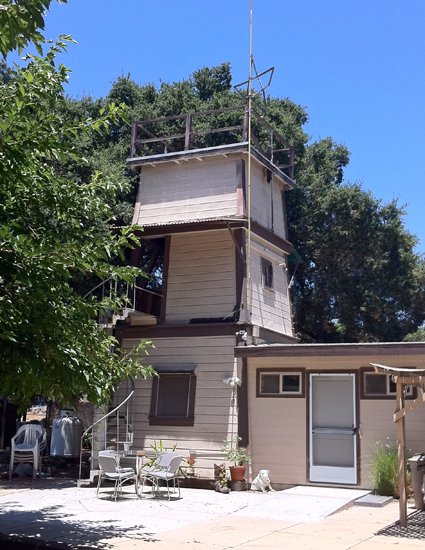 San Diego Californias first lighthouse, one of the first eight to be built along the west coast of the United States, was constructed in 1854 atop Point Loma, where it was hoped its light could guide mariners along the coast and into San Diego Bay. During Californias warm summer months, the low-lying fog that frequently blankets the coast rendered Point Loma Lighthouse, with its lofty focal plane of 462 feet, ineffective. To correct this problem, two new lighthouses situated closer to sea level were required. On October 2, 1888, Congress appropriated $25,000 for a light and fog signal at Ballast Point, a tiny peninsula that juts eastward from Point Loma, to direct vessels into the protected waters of San Diego Bay. Work on this new station began in February 1890 and was completed by the end of March. In 1890, an iron, pyramidal tower was erected on Pelican Point, the low-lying southern tip of Point Loma, where its light could be seen well out to sea. This lighthouse, known now as New Point Loma Lighthouse, was activated on March 23, 1891, the same day Old Point Loma Lighthouse went dark.

Ballast Point derived its name from the fact that early skippers would have stones gathered from the point to serve as ballast in their vessels during their homeward voyages. Juan Rodriguez Cabrillo sailed from the Port of Navidad in 1542 and, after bucking headwinds and seas for five months, sighted the Coronado Islands. As he continued northward, the headland of Point Loma rose from the sea. Working his way past kelp beds, he dropped anchor in the quiet waters inside the present Ballast Point on September 28th, 1542. Cabrillo tarried for six days in this spacious harbor that he named San Miguel.

Sixty years passed before the placid waters around Ballast Point were again disturbed by deep-sea keels, when Sebastian Vizcaino anchored there on November 10th, 1602. He renamed the harbor San Diego in honor of that Saint's day. In 1769, Spain decided to occupy the vast territory by converting the Indians to the Catholic faith and teaching them domestic pursuits. By this time little transports were coming with supplies on a haphazard schedule, and when the Aranzaya arrived in 1795, she brought three workmen and the necessary timber to build a fort at Ballast Point, or as it was known at that time, Point Guijarros.

From the 1850s up until the construction of the lighthouse in 1890, Ballast Point was home to a whaling station. New England whalers hunted Gray Whales off Point Loma and then towed them to Ballast Point, where their blubber was boiled in 150-gallon cast-iron pots at the try-works. The original lighthouse buildings at Ballast Point station consisted of a two-story wooden bell tower, a boathouse, and two dwellings, one of which was attached to a square, wooden light tower. The California lighthouses at San Luis Obispo and Table Bluff were built using the same plans employed for Ballast Point Lighthouse. An iron lantern housing a fifth-order Fresnel lens manufactured in Paris, France by Sautter, Lemonier, & Co. topped Ballast Point Lighthouse, and the stations fixed white light was first exhibited on August 5, 1890.

In 1928, the wind-up machinery for tolling the bell was removed from the bell tower and replaced with a fog horn, air compressor, and tank. The horn was mounted on a porch on the second story of the bell tower, and the first floor was enclosed at that time to house the foghorn equipment.

After stints at Oakland Harbor Lighthouse and Point Bonita Lighthouse, Hermann Engle was placed in charge of Ballast Point Lighthouse in 1916. Engle spent fifteen years at Ballast Point and during this time was commended several times for going beyond the call of duty. In early 1917, the Secretary of Commerce recognized Engle for voluntarily giving his time for one day each week during the past year for the purpose of polishing the lens and brass work of the exhibit of the Lighthouse Service at the Panama-California International Exposition at San Diego, Cal., in addition to performing his duties as keeper of the Ballast Point Light Station. In 1922, Keeper Engle was lauded for saving a little girl from drowning, for rescuing two women who had drifted out to sea in a small skiff, and saving two men from a sinking United States Army airplane, which had fallen in the channel near the station.

In a modernization step that gave little regard to historical preservation or inspirational architecture, the two keepers dwellings at Ballast Point were torn down in May 1960, leaving the tower topped by the lantern room free standing. While repairs to the light tower were being made, it was found to be unstable due to the failure of its brick and mortar foundation. A third story for displaying a new light was added to the stout bell tower, and the original light tower was demolished after its lens and lantern room were removed. A new duplex dwelling was built where the former dwellings stood.

The new light, a standard 375mm lens with storm panes, had a signature of three seconds on and three seconds off and went into operation on August 5, 1960 atop a third story that was added to the bell tower. The old light used a 120-volt, 300-Watt lamp, giving 1,700 candlepower. The new light, even though it used a smaller 32-volt, 250-Watt lamp, gave 9,000 candlepower, due to the increased efficiency of the filament and the removal of the green shade.

The fog signal at that time was a single-tone diaphone which emitted one blast every fifteen seconds. In the event the diaphone became inoperative, the men on station were required to ring a large bell by hand, with one stroke every fifteen seconds. A new three-bedroom and a four-bedroom duplex type dwelling were built adjacent to the light structure.

The combination tower was only in service for a short time when a new light was established offshore in 1961. The man hired to raze the tower informed his friend Monroe A. Platt that the tower was free for the taking, but it would probably cost about $300 to relocate the structure. The tower was hoisted onto a flatbed truck using a thirty-five-ton crane and transported to the backyard of Platts Lakeside home. Platt, a telephone engineer, added an external steel spiral staircase to link the first two floors of the tower and converted the second floor of the tower into a shack for his ham radio station  W6ZFP. A bathroom was later attached to the lower story, which the family used as a guesthouse.

The original Ballast Point fog bell, forged in San Francisco by Garritt and Co., ended up in a scrap yard after the tower was discontinued in 1961. Alva Ollie Oliphant, a mechanical arts teacher for many years in the San Diego school system, often picked up scrap metal for his students and was thrilled when he discovered the bell. After paying the scrap metal price of five cents a pound, Ollie had it put on a trailer and towed it home behind his Volkswagen van.

Ollie mounted his new possession on wooden gallows he constructed from old timbers salvaged from the old North Island ferry landing, and the bell remained at the Oliphant home until 1990, when it was loaned to the San Diego Maritime Museum and placed on display along the promenade near the ferryboat Berkeley. After a year or so, Ollie retrieved the bell from the maritime museum, and it has remained in the family since that time. Around 1999, the bell was moved to the home of Ollies son Steven in Colorado, and then in 2002 it was shipped cross-country to Vermont, where it is now in the possession of Ollies granddaughter Kyra Wilson. Kyra remembers ringing the bell with her brother while visiting her grandfather in San Diego, and now her own two children, a brother and sister, get a thrill out of tolling the bell and hearing it echo in their mountain valley.

The whereabouts of the Ballast Point lantern room was a mystery to almost everyone until it was placed on display outside West Sea Company, a nautical antiques store in San Diegos Old Town. In early 1998, Rod Cardoza, co-owner of West Sea Company, noticed a classified ad in the local paper that read, HISTORICAL Lighthouse, Dallas [sic] Point, 1880s, minimum bid $15,000. Intrigued, he called the number on the ad and shortly thereafter traveled to Bonita to view what turned out to be the lantern room from Ballast Point Lighthouse at the home of Homer Hudson. Cardoza hired a crane to have the lantern room lifted over nearby power lines and placed on a flat-bed truck. After being delivered to his store, the lantern room was placed on a cement pad, where, fitted with new glass panes and covered in a fresh coat of paint, it can be viewed today.

The nation was just recovering from the Cuban Missile Crisis, when, in February 1964, the Cuban government cut off the fresh water supply to the U.S. Naval Base at Guantanamo Bay. An experimental desalinization plant had been in operation at Point Loma for just over two years, and the Navy ordered it dismantled and shipped through the Panama Canal to Guantanamo Bay. Homer Hudson, who sold the lantern room to Cardoza, was working as a crane operator as part of the team disassembling the desalinization plant when he noticed the interesting artifact lying nearby. He inquired if he could purchase the lantern room and was told that he could have it if he would haul it away. Soon the lantern was serving as a gazebo in Hudsons garden, and there it remained for thirty-four years.

Ownership of the fifth-order Fresnel lens used at Ballast Point was awarded to Cabrillo National Monument in 1966, and it is now on display in the assistant keepers dwelling adjacent to the Old Point Loma Lighthouse. Though a few news articles have been written about the Lakeside Lighthouse through the years, by 2011, fifty years after the tower was decommissioned, most people had forgotten that a Ballast Point lighthouse still existed. That year Judy Bowen, who lives in the home owned by her father, Monroe Platt, decided that the bell/light tower, rather than face an uncertain future, needed to find a new home where it could be preserved and appreciated. Fellow Lakeside resident Dennis Richardson is leading an effort to relocate the tower. Click here to watch a YouTube video covering the history of the bell tower.

For a larger map of Ballast Point Lighthouse, click the lighthouse in the above map.

The lantern room from Ballast Point Lighthouse can be seen outside West Sea Company at 2495 Congress Street in San Diego's Old Town.