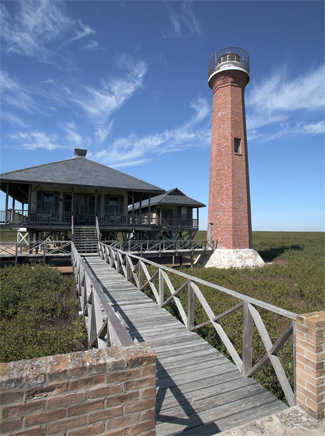 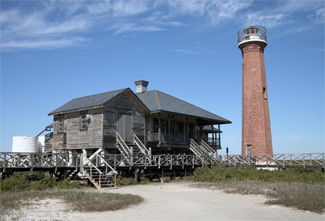 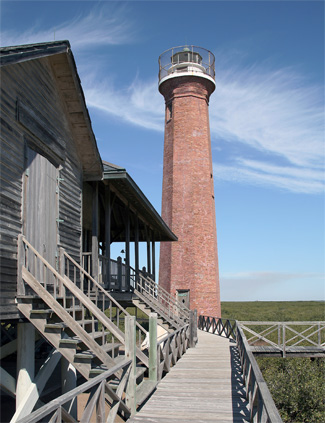 The majority of Texas 400-mile-long coastline is protected by a necklace of barrier islands and peninsulas, broken only by a few openings or passes that provide access to protected bays and harbors. Aransas Pass is one such gap, located between Saint Joseph Island to the north and Mustang Island to the south. The pass leads to the port of Corpus Christi some twenty miles or so to the west. On March 3, 1851, Congress authorized $12,500 for the construction of Aransas Pass Lighthouse. That same year, Lieutenant Commander T.A. Craven of the Coast Survey, while mapping this part of the Texas coast, recommended that a lightship be used to mark the pass, which was known to be slowly creeping south as currents deposited sand on the southern end of Saint Joseph Island and cut away the northern tip of Mustang Island.

Before settling on the type of light to mark Aransas Pass, the Lighthouse Board ordered a second survey of the coast, which occurred in 1853. H.S. Stellwagen visited the area and concluded that a screwpile lighthouse located inside the pass would be most useful on this coast where there is so much sameness as to make it almost impossible to distinguish one place from another. Adding another option for the lighthouse, District Inspector Walter H. Stevens in Galveston recommended a prefabricated cast-iron tower like those in use at Bolivar Point and on Matagorda Island. The task of determining which of the lights was most suitable to the area was then turned over to a committee that, perhaps a bit surprisingly, concluded that a brick tower, the most permanent style of lighthouse, should be used. The federal government purchased twenty-five acres on Harbor Island, located just inside the pass, and the state of Texas shortly thereafter ceded jurisdiction over the land on June 20, 1855.

A schooner carrying the bricks for the tower foundered on the sandbar at the entrance to Aransas Pass during high seas in late December 1855. The crew was rescued, but the ship and its cargo were a total loss. During 1856, new bricks arrived at the island, followed later by the lantern room, and finally a fourth-order Fresnel lens. The keepers dwelling and the fifty-five-foot, octagonal tower, with a coat of brown paint, were completed by the early part of 1857. The light from the towers lantern room first illuminated the night sky above the pass later that year.

Sometime after the start of the Civil War, the lens was removed from the lantern room for safekeeping. Control of the tower passed repeatedly between Confederate and Union forces. Then, on Christmas Day 1862, Confederate General John B. Magruder ordered the destruction of the tower. Two kegs of powder were exploded inside the tower, damaging the upper twenty-feet of brickwork and destroying most of the circular staircase.

After the war, Texas lights were gradually repaired or rebuilt and returned to service. Early in 1867, a work crew arrived to repair the upper portion of the damaged tower at Aransas Pass. Acting District Lighthouse Engineer M.F. Bonzano described a winter storm that hampered the work: During the progress of the repairs one of the severest Northers ever experienced on the Texas coast occurred. The cold was so severe that frozen fish were hove ashore by the hundreds and birds of all sorts sought refuge in the tower and camp of the workmen where they perished in large numbers. Aransas Pass Lighthouse was the last principal light along the coast to return to service, doing so in the spring of 1867.

Parry W. Humphreys was appointed keeper of the lighthouse on June 3, 1869. To supplement the provisions supplied by the Lighthouse Service, the family maintained a vegetable garden on Mustang Island. While the two previous keepers had lasted only a year at the station, Keeper Humphreys spent over sixteen years and apparently didnt leave the station willingly. In 1885, the District Inspector felt that Keeper Humphreys, who was about seventy-four years old at the time, was unfit to maintain the station. The superintendent visited the station and urged the dismissal of Humphreys not only on account of his age but also for drunkenness, disobedience of orders and refusing to pay his debts. The Humphreys finally left the station in March 1886. At the time of their departure, Jane Humphreys had been serving as assistant keeper to her husband for a decade.

Hurricanes periodically swept through the area, inflicting varying degrees of destruction on the station. The most damage was caused by the hurricane of August 18, 1916, which prompted Congress to allocate $20,000 for repairing buildings and dwellings, out buildings, and appurtenant structures, damaged or destroyed in the hurricane. The brick keepers dwelling was leveled, while the porches were torn away from the frame assistant keepers dwelling and the stations wharf was wrecked. A temporary walk was built and repairs were made to the assistant keepers dwelling, but work on more permanent structures didnt begin until May 1918.

A double-dwelling of hollow-tile construction was built about thirty feet southwest of the lighthouse atop twenty cast-iron columns that were each supported by a concrete footing that capped a nineteen-foot yellow-pine pile driven into the marsh. The dwelling had three rooms in each of its two apartments and its roof extended out over a wrap-around porch. Detached kitchens were built behind the dwelling and were linked to it by a four-foot-wide covered gallery. Facilities, in the form of a two-compartment, frame privy set atop a brick foundation supported by a creosoted pile foundation, were also separate from the dwelling. A thirty-foot-long and six-foot-wide wharf was built parallel to the nearby bayou, and a five-foot-wide walkway that was roughly 270-feet-long connected the wharf to the dwelling, oil house, and tower.

On September 13, 1919, two days after the new structures were practically complete, another devastating hurricane struck the station. The workmen weathered the storm in the new hollow-tile keepers dwelling, but the old assistants dwelling was swept away. A second small dwelling was subsequently built just behind the tower and adjacent to the double-dwelling. These edifices survive to this day, along with a third dwelling added around 1940.

Electricity reached the station in 1928 when diesel generators were brought in to power a newly installed radiobeacon. Using a signal from at least two such beacons, mariners could determine their precise position along the coast. On April 11, 1935, the keeper at Aransas Pass was forced to operate the radiobeacon continuously for two days as the air was filled with dust, limiting visibility to about a quarter mile. The keeper reported: The dwelling, tower, and radio room, are covered, inside and out, with a coating of dust that is as fines as chalk.

By the middle of the twentieth century, Aransas Pass had slowly inched over one mile south of the lighthouse. To better mark the entrance, a new light was established in 1952 at the Port Aransas Coast Guard Station, and Aransas Pass Lighthouse was deactivated, just a few years shy of a century of service. The Lydia Ann Channel, which runs north from the pass, was now the closest waterway to the tower, and the lighthouse started to be referred to as the Lydia Ann Light.

The origin of the name Lydia Ann is a bit uncertain. A historical marker near the tower indicates that the channel was named for the daughter of the first keeper. Keeper Frank Stephenson did have a daughter named Lydia Ann, who married her fathers assistant, Thomas P. Roberts, but Stephenson was the stations ninth keeper, not the first. Local historians believe Lydia Ann Channel was named for Lydia Ann Dana Hastings Hull Wells, wife of James B. Wells, a veteran of the Texas Revolution who settled on St. Joseph Island with his family and raised cattle for several decades until his death in 1880.

In 1955, after no government entities expressed interest in the abandoned Aransas Pass Lighthouse, it was sold into private hands. Everett Bohls, of Austin, Texas, submitted the winning bid of $25,151, while the mineral and oil rights were sold separately to Jack Rowe. Charles Butt, president of the H-E-B grocery store chain, purchased the property in 1973 from Jack Frost. During the next decade, Butt oversaw the restoration of the tower and outbuildings, and hired author Francis Ross Holland, Jr. to write the history of the lighthouse. In 1984, Butt employed Rick and Cameron Pratt as live-in caretakers (prior caretakers included Steve and Sandy Durhan, Ted Norman, and Jimmy Gates). After the light returned to service on July 3, 1988 as a private aid to navigation, these modern lightkeepers would ascend the towers sixty steps each evening to activate the light, and then Rick would fill the evening air with the drone of bagpipes as Cameron lowered the stations flags  a fitting ceremony for a lighthouse acquainted with years of regimented life under the Lighthouse Service. Since the Pratts, other modern keepers have been employed to watch over the beacon.

For a larger map of Aransas Pass (Lydia Ann) Lighthouse, click the lighthouse in the above map.

The lighthouse can be seen in the distance by looking up the intracoastal waterway from Port Aransas. One good place in particular is Lighthouse Trails, a kayaking launch site next to Highway 361 between Aransas Pass and the ferry to Port Aransas.

To get a better view of the lighthouse, you can take one of the tours offered by Kohootz. Make sure and ask if the lighthouse is included on their tour route. Aransas Pass Lighthouse is privately owned, so is not open to the public, but there is a public waterway that runs close to the property.

The fourth-order Fresnel lens used in the lighthouse is on display at the Port Aransas Museum.


We chartered a boat out of Port Aransas to take us near the lighthouse. To fill the remainder of our one-hour-minimum tour, we traversed several channels in the area admiring groups of beautiful white pelicans and brightly colored roseate spoonbills. While returning to port, we were lucky to see several dolphins playing in the bow wave of a large cargo ship. Before the trip, the captain had persuaded us to purchase some fish to feed to dolphins during our tour. We missed out on that experience, but at the end of the tour, Joanne was more than thrilled to provide dinner for a crowd of eager pelicans that swarmed the boat.


Very cool lighthouse. I felt like the crocodile hunter touring the water channels. As long as I did not see any crocs, it remained fun. The pelican frenzy hovercrafting the boat was enough wildlife action to meet my quota.