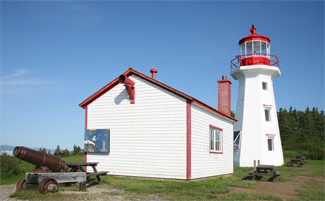 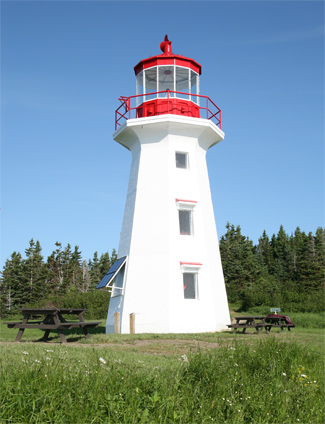 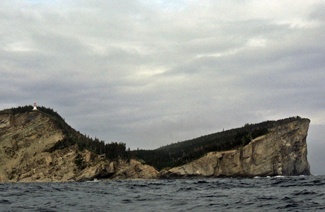 Taken from the Mi'kmaq word, Gespeg, meaning end of land, Cap Gaspé is where the Appalachian Mountains meet the Atlantic Ocean. Gaspé became the Cradle of Canada, when Jacques Cartier erected a cross nearby in 1534. Cap Gaspé is a limestone headland at the tip of a peninsula that is 3½ miles long and less than ¾ of a mile wide. On its eastern side, the cliffs fall nearly 700 feet into the sea, but are much lower on the southwestern and western side. Looming just off the southeastern shore, awash at high tide, is Flowerpot Rock, also known as the Ship Head or The Old Woman, which vessels must round as they enter Gaspé Bay.

On top of the cape, close to its edge stands Cap Gaspé Lighthouse. The first lighthouse built here in 1873 was a thirty-foot-tall, square wooden tower with an attached keepers dwelling. It exhibited a fixed red catoptric light, comprising four lamps and twenty-inch reflectors, at a focal plane of 350 feet. Charles Esmouf was hired at an annual salary of $800 to look after the light, which was first exhibited on October 6, 1873 and could be seen from up to twelve miles. Out of his salary, Esmouf was required to hire a competent engineer to work the steam fog signal, which was situated in a valley about 270 yards from the lighthouse. The fog alarm commenced operation on May 22, 1874 and sounded a ten-second blast each minute when needed. The lighthouse and fog alarm building were built by Doolan & Cassidy, while J. W. Fraser supplied the fog alarm equipment.

By 1883, the fog whistle at Cap Gaspé had been determined to be ineffective, and that year the equipment was relocated to Cap des Rosiers and put into operation there on August 15.

The lighthouse and keeper's dwelling at Cap Gaspé were consumed by fire on November 7, 1890. Tenders for a new lighthouse were invited the following spring, when Adolphus Rousseau of Ontario submitted the only bid. When called upon to complete his $2,980 contract, Rousseau refused, and tenders were invited anew that fall. The low bid of $3,480 in the second round was submitted by E. T. Nesbitt of Quebec, who had until August 1 of the following year to complete the lighthouse.

The new lighthouse was built on the site of its predecessor and consisted of a wooden combined lighthouse and dwelling, with a square tower rising from the middle of the south face of the dwelling. Nesbitt completed the lighthouse on schedule, and the new light, which revolved once per minute to produce three bright flashes with intervals of fifteen seconds between their points of greatest brilliancy, followed by a thirty-second eclipse, was first exhibited on November 1, 1892. The tower was forty-six feet tall, giving its light a focal plane of 355 feet. The total cost of the new structure was $5,421.15.

In 1894, guy-wires were put in place to stabilize the new tower, which, due to its exposed location, was often buffeted by high winds.

A small building nearby housed a fog cannon from 1883 to 1894. From then until a diaphone fog horn was added in 1950, cotton powder cartridges were exploded from its roof in times of fog to warn mariners of the dangerous shore. These cartridges were initially fired every twenty minutes, but in 1901, the frequency was increased to once every fifteen minutes, and when a vessels fog signal was heard, an additional shot was fired immediately and then at intervals of five minutes until the vessel passed the station. In 1970, an electronic foghorn replaced the diaphone, but this modern signal is no longer active.

The present tower, a white, octagonal concrete tower with a red lantern, was also built in 1950. It is a sister to Cap-de-Bon-Desir, Cap-au-Saumon and Cap-dEspoir. It stands forty-two feet high and exhibits a white flash every five seconds that can be seen from twelve miles. The current light operates on solar power.

Today, Cap Gaspé Lighthouse is part of beautiful Forillon National Park. If you hike or bike out to the lighthouse, you will see an area on the right side of the trail, a short distance before the lighthouse, where supplies for the lighthouse were landed. A derrick was used there to offload the Napoleon III and Newfield, two steamers that supplied the station.

For a larger map of Cap Gaspé Lighthouse, click the lighthouse in the above map.

From QC 132 just east of D'Aiguillon, follow Boulevard de Grande Grave along the coast through Petit Gaspé, Grande-Grave, L'Anse Blanchette, Anse-Saint-George, and finally Anse-aux-Amérindiens, where you need to park and hike or bike 4 km (2.5 miles) to the lighthouse. An entrance fee is required to enter Forillon National Park. There are two routes to the lighthouse: a dirt road reserved for park vehicles and a trail that is part of the International Appalachian Trail that winds along the coast and then up to the top of the peninsula before reaching the lighthouse. The road is definitely the most direct route. A separate parking area is available for each route.