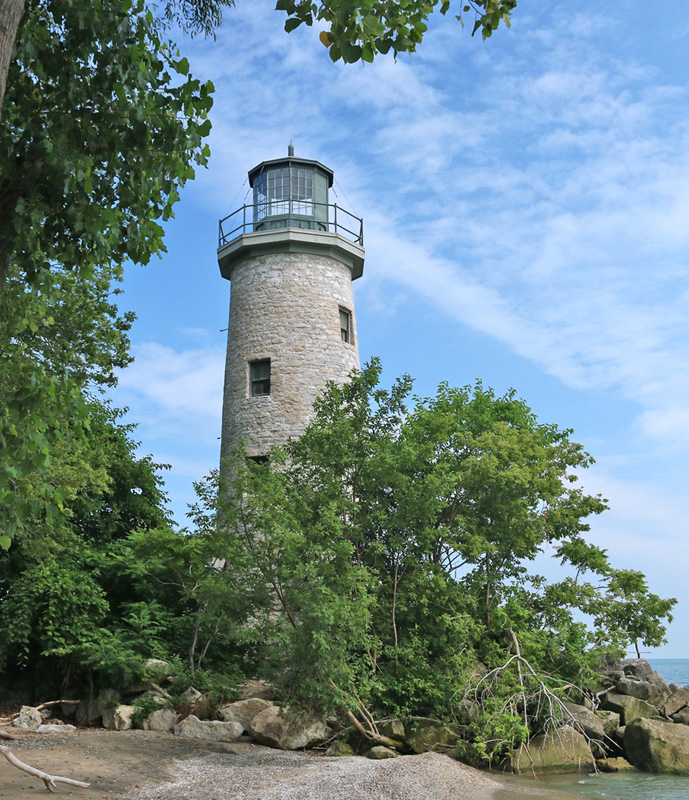 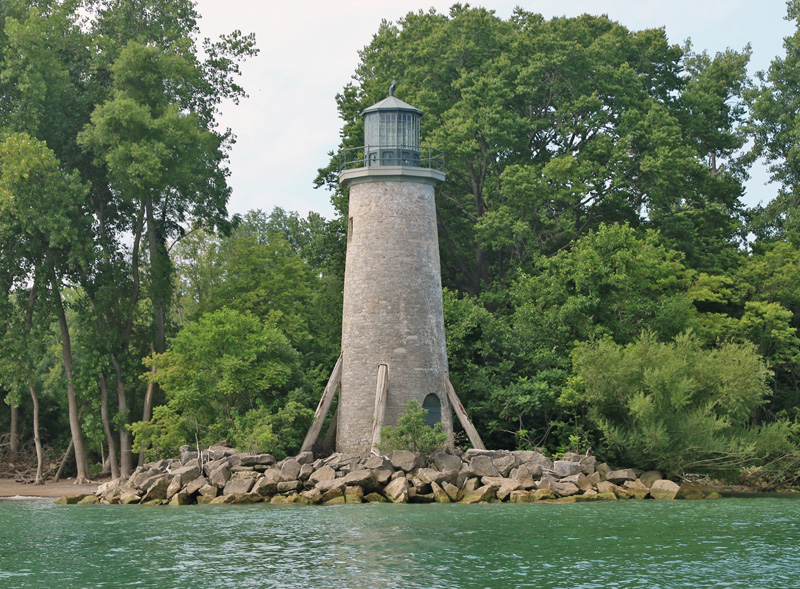 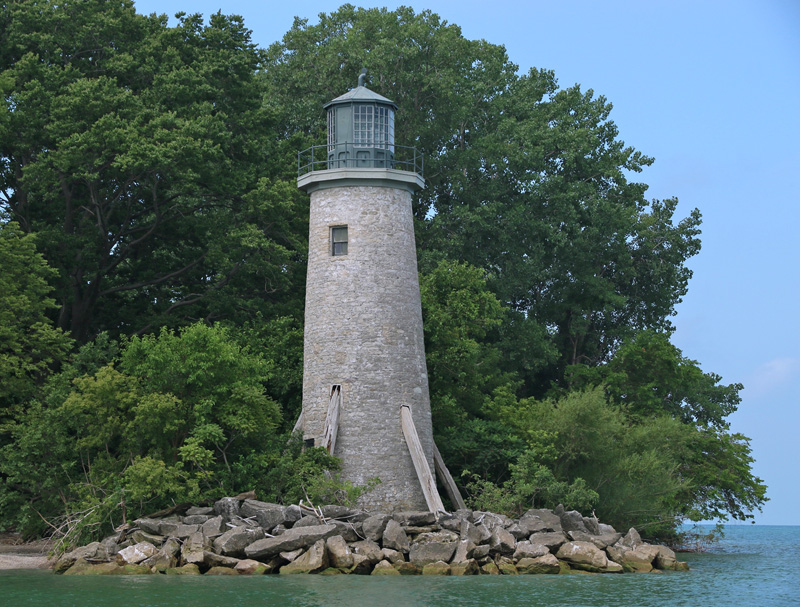 Pelee Island is the largest island in Lake Erie, and due to its moderate climate (only tiny, uninhabited Middle Island lies further south in Canada than Pelee Island), it has been used for agriculture many years. Vineyards were planted on the Pelee Island in the 1860s, and winemaking is today once again an important part of the islands economy.

Give the islands location near the shipping route leading to the Detroit River, authorities recognized the need for a light on the island tip early on, and on February 13, 1833, an act was passed providing money for erecting the lighthouse and appointing commissioners to superintend the project. The commissioners selected Brushey Marsh Point, the northern tip of the island, as the site for the lighthouse, and on April 24, 1833 a £675 contract for the work was awarded to John Scott of Detroit, the lowest bidder.

Scott was required to completed the tower by October 1, 1833, and the commissioners gave the following report on the lighthouse the following March: It will be remarked that this Light House is, in every respect, a neat and well-finished, and most substantial building, well pointed and whitewashed on the outside, which has been found preferable to roughcast, and it cannot fail to last for ages. The commissioners appraisal of the lighthouse has proven correct, as though the tower had suffered from erosion and neglect, it continues to stand to this day.

William McCormick was the owner of Pelee Island under an old Indian lease at the time the lighthouse was built, and he offered to give ten-acres of land to the government for the use of the keeper. The commissioners lamented that no money had been provided for a keepers dwelling in the original appropriation and recommended that a residence be promptly built for without it, they felt it would be difficult to get the lighthouse properly attended to and taken care of. The matter of finding a keeper to serve with no dwelling was resolved by placing McCormick in charge of the light.

Keeper McCormick complained to his superiors in September 1834 about the quality and quantity of oil supplied him: The lighthouse has been out of oil for several weeks past. I think you had better authorize me to buy oil from Buffalo, where I think it might be got of better quality than has been furnished. I have ascertained that it was not of that quality used in lighthouses and will never make a good light.

In February 1838, the McCormick family had to flee to the mainland when a group of Patriots crossed over the ice from Ohio and occupied the island. William McCormick died on February 20, 1840, and his son Alexander was placed in charge of the light.

In the 1840s, mariners expressed dissatisfaction with the lighthouse on Pelee Island. Captain Sandom reported the following in 1841:

I deem it a duty to bring to His Excellencys notice, that a general dissatisfaction pervades all the maritime classes who navigate the Lakes, as well as those interested in the shipping interest of the Country, in consequence of being forced to pay a special Tax for Lights, when there are none where they are most required, and those which do exist are so badly kept up as to be worse than useless, tending from their imperfect state to lead the Mariner into danger rather than to preserve him from it. I allude particularly to the Light upon Point Pelée Island, and could not help drawing the comparison between the British and American shores. On the latter, I found good Lights and Beacons at all parts, and excellent Ports, well lighted, without any Tax being imposed upon the navigation, while the British navigator pays a Tax expressly for that which he has not.

In 1844, the president of the Board of Works noted that the keeper didnt reside on the Pelee Island but rather paid a farmer who lived three miles from the lighthouse to look after the light. The captains of three vessels reported that they were obliged to run for the island in poor weather and barely made it due to the miserable state of the light. Once ashore, the captains went to the lighthouse and found some of the lamps in the lantern room out and the others filthy and untrimmed. It was clearly evident to them that the lamps had been lighted the evening before and then left to burn unattended through the night.

These issues with the light were perhaps what prompted a dwelling to finally be built at the site. The need for a dwelling was noted in 1844, and it must have been built around that time as in 1855, the Report of the Commissioners of Public Works noted the following:

The state of the Light House and Tower on Pelee Island, in Lake Erie, will demand early attention in spring. During the heavy equinoctial gales; the waters cut so deeply into the margin of the Lake, as to undermine the Keepers House, and to within a short distance of the Light House Tower. The house must be moved back, and the bank protected with stone.

Measures to protect the tower and dwelling on Pelee Island were carried out in 1856 and 1858, and in 1866 a cribwork groin was built to shield the beach in front of the lighthouse.

Whale oil was initially used in Pelee Island Lighthouse, but as its prices increased, coal oil, which was found to possess equal if not superior illuminating qualities, was introduced in the more accessible lighthouses in 1860. The lamps at Pelee Island were adapted to use coal in 1864.

James Cummins took charge of the light in 1850, and save for a period of four years, served as keeper of Pelee Island Lighthouse until 1889. In 1877, it was noted that James Cummins had no family and that twelve lamps with fifteen-inch reflectors were being used in the towers iron lantern room. The following year, Darius Smith, the Superintendent of Lighthouses above Montreal, reported that an oil house was desperately needed at the station as the lighthouse was crowded with oil tanks up the third flat, which is very dangerous in case of an accident taking place.

The Canadian government awarded Keeper Cummins a gold watch valued at seventy-five dollars for gallant and humane services rendered in saving life. The two rescues for which Cummins was responsible occurred on July 3, 1869 and December 5, 1870 and were described as follows:

For rescuing (1) the life of Andrew Poustie, master of the schooner George Warren, and that of two others on same vessel which had capsized through the effects of a fierce gale in Lake Erie ; and (2) the lives of the captain and crew of the schooner Tartar, of Buffalo, wrecked on the outer reef of Point Pelee Island; Mr. Cummins having displayed great bravery and perseverance on both occasions.

The following account from a correspondent in Amherstburg describes a valiant rescue made by Keeper James Quick, a later keeper of the light, during a terrific gale on December 5, 1898:

The wind registered 80 miles per hour, the thermometer showed the mercury below zero, a heavy storm was raging. It was a critical time for mariners. On the middle ground on Pelee Island Reef a large vessel was stranded and flying a flag of distress, and in danger of breaking up. Both her life-boats had been launched and capsized, and she was covered with ice.

Mr. James Quick, then lighthouse keeper on Pelee Island, telephoned for assistant, and a tug left Amherstburg at 3 oclock in the morning. On arrival at Pelee, the tug could not get nearer than 2,000 feet of the distressed vessel on account of the ice, the shoal water, and the terrific gale.

An appeal for help was made to the life-saving station, but the boat had not been launched for two years, and was not seaworthy, and, moreover, the captain was not here. An appeal was then made to Mr. James Quick, who came in his little boat through the blinding gale with provisions, clothing, necessaries as the crew required, and courageously brought relief to over a hundred persons in a dangerous situation.

Shortly after this, Keeper Quick was dismissed from office. Some reported that it was because he was absent from the lighthouse for three hours during the rescue or for political reasons, but the Minister of Marine and Fisheries later testified that it was because of neglect and flagrant disobedience to orders. Since 1893, Keeper Quick had been asked at least twenty times to forward his meteorological reports, but he failed to bring the reports up to date or submit any reply.

In 1908, a fifth-order French lens with an adjustable iron stand and duplex lamp replaced the array of lamps and reflectors used in the lantern room, but this improvement was to see little use, as Pelee Island Lighthouse was discontinued after being lit for the last time on June 30, 1909. The completion in 1902 of Pelee Passage Lighthouse, midway between Pelee Island and Point Pelee, had greatly reduced the need for Point Pelee Lighthouse.

Left to deteriorate, the abandoned Pelee Island Lighthouse was all but forgotten when a Relight the Lighthouse Committee was formed to restore and activate the structure. In December 1999, the committee received word that it had been awarded a Canadian Federal Grant that would provide the needed additional funding to complete the restoration. Architect Nicholas Hill was hired to draw up plans, and the historic lighthouse was restored in time to be rededicated in August 2000.

For a larger map of Pelee Island Lighthouse, click the lighthouse in the above map.

Pelee Island can be reached by ferry from Leamington and Kingsville, Ontario and Sandusky, Ohio. From the ferry dock on Pelee Island, it is 11 km (6.9 miles) to the lighthouse on the northern tip of the island. Tours that include a hike to the lighthouse are available.