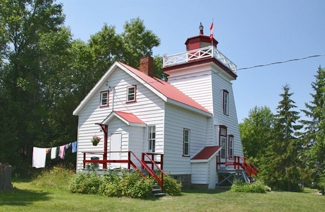 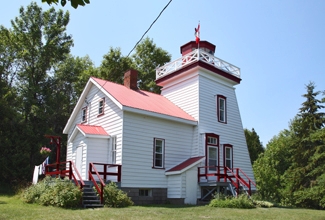 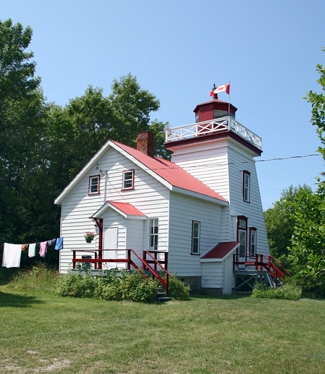 Janet Head, which was named after Bayfields daughter, is a prominent feature on Manitoulin Islands northern shore and helps form the protected anchorage of Gore Bay. Parliament appropriated $2,000 in 1878 for a lighthouse on Janet Head, and a $1,890 contract for its construction was awarded to Richard Whiteacre, with the condition that it be completed by August 15, 1879.

The second oldest standing lighthouse on Manitoulin Island, Janet Head Lighthouse was constructed in 1879 by Mr. Carmichael and Mr. Jones, a local mason, and placed in operation on October 15 of that year. The white square tapered tower stands twelve metres (forty feet) high with a two-story keepers dwelling attached. The octagonal red lantern room held a light designed to be visible for 18 km (11 miles). The original light was fixed white catoptric but later became seventh-order dioptric. A hand cranked fog horn was added to the station in 1888.

Robert Boyter, the first keeper, was born in Kilrenny, Fife, Scotland in October 1835, and emigrated to Thornbury, Ontario around 1868. In his quarterly report of June 30, 1885, he relates the following tragic tale:

I am sorry to say any remarks this time are of a very melancholy nature. My wife and eldest son left here on the 11th (of April) to go to his farm on the North shore with a yoke of oxen but owing to the depth of snow and water on the ice the oxen tired and they had to stay on Dart Island all night and did not reach Spanish river Mills until one oclock next day. She was so badly chilled and frozen that she died on 19th, the boy is still living but if he gets over it will be crippled for life.

Learning of the death of his wife and the condition of his son, Boyter hired George Thorne of Gore Bay, with his team of horses, to take him to Spanish. Making the crossing with them was a Mr. Lewis and two young girls, Mary Baxter, age eleven, and Nellie OShea, daughter of the hotel keeper at Spanish. They started their journey on a clear day, but before long a severe blizzard blew up, making it difficult for the men to see the line of trees that marked the route across the ice. The group was forced to spend the night on the ice, suffering from the cold. When the horses refused to travel the next day, Boyter and Thorne set out on foot to get help and met a search party, who continued on to the stranded group. Mary Baxter had died by the time party reached them, and Nellie Oshea later lost part of a foot to the frostbite. Boyter was held accountable for the tragedy and the death of Mary Baxter, resulting in a number of court hearings, all of which weighed heavy on him, having just lost his wife.

Keeper Boyter later remarried but came to his own tragic end. After spending the day in town on business in 1895, he got into his boat and hoisted sail, but overbalanced, fell in, and drowned in the bay.

Janet Head Lighthouse is currently owned by the Department of Fisheries and Oceans (DFO) and is leased to the Municipality of Gordon/Barrie Island. The lighthouse served as a summer residence for the Fletcher family from 1967, when Stephen and Muriel took out a lease on the property, until the lease was awarded to Janet Head Campground in 1999. After the campground closed, the Fletcher family returned in 2005 and continued to use the lighthouse as a vacation home in return for maintaining the structure and letting the public tour it on select days .

On September 7, 1979, Stephen Fletcher was preparing to wallpaper one of the rooms when he discovered the following letter that had been written on Department of Transport letterhead by Keeper George Thorburn in 1941 and placed in a stovepipe hole:

I am just curious to know how long it will be when someone repapers these rooms.

I am papering this room again North East room downstairs. 12 years since I papered it before, and we are heading for another war with Russia. The United Nations are fighting in Korea now trying for nearly three years to get a settlement.

I wont be looking after light much longer. Dominion Election on August 10th this year and I may lose my job. I am not feeling too good. Very hot weather and my heart is troubling me.

Keeper Thorburn did not lose his job, but continued as lightkeeper until 1955, when the light was automated. He stayed on after that as caretaker.

The Coast Guard continues to maintain the light, which is currently an occulting, solar-powered L.E.D. light that runs twenty-four hours a day, seven days a week, flashing three seconds on and two seconds off.

For a larger map of Gore Bay (Janet Head) Lighthouse, click the lighthouse in the above map.

Starting in 2019, the lighthouse should be open to the public between 1 and 4 p.m., Tuesday through Thursday, during the months of July and August.

The lighthouse is owned by the Canadian Coast Guard. Grounds open, tower open during the summer.