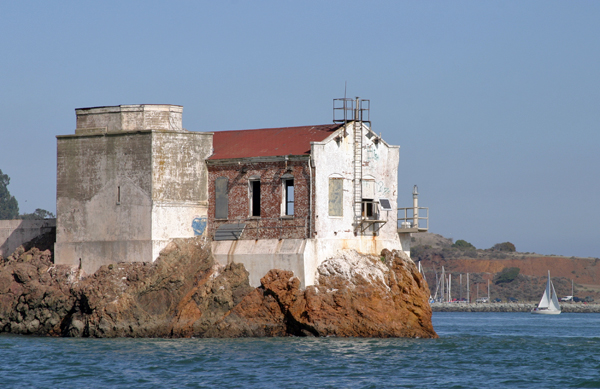 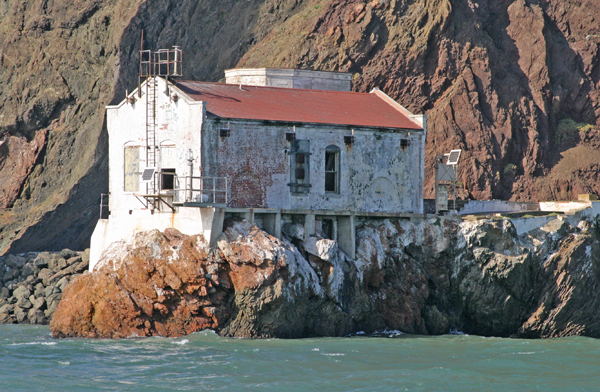 Lime Point is situated on the northern side of the Golden Gates narrowest section, and from this point, a rocky spur, just twenty feet wide, extends roughly 100 feet into the bay. In 1882, the San Francisco Chamber of Commerce petitioned Congress for a fog-syren at Fort Point, where a fog bell was then in use. The Lighthouse Board entertained the matter and concluded that the proposed steam fog signal should be erected at Lime Point, on the opposite side of the Golden Gate, since there was an evident obstruction to the transmission of sound at Fort Point that caused vessels approaching from the south to often lose the ringing of the fog bell when they needed it most.

When the sound of a signal on Lime Point is once picked up anywhere outside the harbor or off the city front, the Board claimed, it can be steered for directly, and with confidence, until it is so close aboard that it can be made in the thickest weather; and then the position can be determined with such accuracy that a straight course can be laid either to the city or to the sea.

After Congress provided the needed $12,000, work on erecting a fog signal on Lime Point began early in March 1883. Progress was at first slow due to the narrow and steep construction site, but over the next few months a one-story fog signal building, a coal shed, and a two-story keepers duplex started to rise above the rocky spur. The fog signal building was positioned closest to the water, so its twin twelve-inch steam whistles, powered by coal-fired boilers, could warn vessels away from the rocky hazard. Water for the keepers and the fog signal was tapped at a nearby spring, piped to the station, and stored in a 20,000-gallon tank situated at the inner end of the spur.

The fog signal was placed in operation on September 10, 1883, with Reinhold Holzhuter serving as the first head keeper and Patrick J. Quinlan as the first assistant keeper. That first autumn, it was found that the spring could not furnish an adequate water supply so a pipe was extended to a second spring. Heavy rains during the first winter triggered a landslide that damaged the water tank and led to its being moved to the top of the bluff near the springs, some 1,800 feet from the fog signal.

The hungry boilers could consume over ninety tons of coal a year, at a rate of 180 pounds per hour when the signal was in operation. In an attempt to save money, the boilers were converted in 1902 from coal to oil. The crude oil was fed into a burner at high pressure, mixed with steam, and the resulting minute particles were then set on fire. The cost of operating the signal for a twenty-four hour period fell from $25.44 to $6.91, and the oil had the added advantage of producing less smoke.

Light stations, which may or may not have included a fog signal, were much more common than fog signal stations. However, fog posed a very serious danger to vessels, especially near San Francisco, and in the late 1800s, fog signal stations were established at Año Nuevo, Point Montara, Lime Point, and Point Knox. A light was added at Año Nuevo in 1890, and a decade later, it was decided that the keepers at the remaining three fog signal stations should also exhibit a light. Accordingly, on November 26, 1900, lens lanterns were lighted at the three stations, and California now had three new lighthouses. The lens lantern at Lime Point was hung on the southeast corner of the fog-signal buildings gallery, where it was nineteen-and-a-half feet above the water.

John McKenna, who replaced Reinhold Holzhuter as head keeper in 1901, was returning to the station on December 22, 1902, after a day of Christmas shopping in San Francisco, when he fell down an embankment and was killed. In some manner which will never be known, read the article announcing the keepers death, McKenna missed his footing and fell about fifteen feet, striking his head on the rocks, fracturing his skull. Keeper McKenna was forty-seven and had previously served as an assistant keeper at Point Bonita and Point Reyes.

Peter C. Nelson, the next head keeper, had the longest tenure of any of the stations keepers, serving on the point for an amazing twenty-eight years. Captain Nelson kept an active eye on the stations surroundings with his trusty telescope. In September 1909, he spied three young men in a sailboat who had lost their sail and had been swept by the tide out to Mile Rocks Lighthouse. Using their oars, the young men were struggling to make it back into the bay, and as darkness fell they were just nearing Lime Point. Keeper Nelson cheered them on through a megaphone and told them he would call for the lifesaving crew at Fort Point. The observant keeper was credited with saving the lives of the three young men.

The next year, three other foolhardy men were trying to scale a rocky cliff near Lime Point when one of them gave out half-way up. His two companions reached the top, but were too exhausted to offer render assistance. Keeper Nelson discovered the predicament with his telescope and again called on the crew of the Fort Point Lifesaving Station. It was well after dark, when the man was finally rescued.

Keeper Nelson found himself in need of assistance in April 1913, when he lost his balance and fell into the bay while whitewashing the lighthouse. If the tide had been ebbing, Nelson would have likely been swept out to sea and drowned, but Assistant Keeper Edward Wiborg and a party of soldiers from nearby Fort Baker were able to pluck him from the water.

Each of the stations two keepers was required to stand two alternate, six-hour shifts a day. In 1923, the keepers were given the added responsibility of maintaining a minor light placed on Point Diablo, 1.2 miles west of Lime Point.

Being located at the base of a steep cliff at the foot of the Marin hills, the station witnessed several landslides and mudslides, which caused minor damage to the station and often closed the trail to Sausalito. The 1906 San Francisco earthquake wrecked the stations large water tank, necessitating the construction of a new 30,000-gallon redwood tank atop ten concrete piers.

When the Golden Gate Bridge was completed in 1937, a foghorn and light were placed at the base of the bridges south tower, making Fort Point Lighthouse unnecessary. The station at Lime Point was located just east of the base of the north tower and remained an effective position for a light and foghorn. Even with the massive, lighted bridge and active fog signals, navigating the Golden Gate in foggy conditions could still be tricky. On June 3, 1960, the 440-foot freighter India Bear wandered off course and rammed the concrete causeway leading to the station, even though the fog signal was sounding. I thought the bridge had come down, said Nieves Saldate, the coastguardsman in charge of the station who was busy clearing his dinner dishes when the collision occurred. The ship received $60,000 of damage in the form of a crushed bow, while the station just lost an outhouse, which the Coast Guard was already planning on removing. After assessing the damage, the India Bear headed back to the Todd Yards in Alameda where it had just undergone repairs.

In 1959, the station had received another unexpected visitor just a week before Christmas, and it wasnt Santa Claus. Im not sure exactly what a burglar was expecting to steal from a light station, but the coastguardsmen manning the station that night found themselves looking down the barrel of a .22 caliber pistol. The robber shot the top off a ketchup bottle and put a slug into a wall telephone to show he was serious before ordering the men to hand over all their cash and taking a .45 automatic from a desk drawer. Prior to retreating down the stations dark road, the intruder warned the first one who sticks his head out gets shot. Willard Salberg, the perpetrator, was arrested about an hour after the incident in a San Francisco bar where he was threatening an Army captain with his newly acquired .45.

Lime Point was automated in July 1961, and the three-story dwelling and other outbuildings were torn down. All that remains of the station today is the pocked fog signal building, which mostly goes unnoticed by the throngs of tourists that come to admire the impressive art deco bridge towering overhead.

For a larger map of Lime Point Lighthouse, click the lighthouse in the above map.

The best way to see the remains of this station is by boat, however, you can get a good view of the lighthouse from the Golden Gate Bridge. Park in the Vista Point parking lot at the northeast end of the bridge, and then walk south on the bridge to the first tower.

Bay Cruises offered by Blue & Gold Fleet and Red and White Fleet that pass under the Golden Gate Bridge will take you near Lime Point Lighthouse.

The lighthouse is owned by the Coast Guard but is being transferred to the Golden Gate National Recreational Area. Grounds closed.


As you drive southbound over the Golden Gate Bridge and stop to pay your toll do you every wonder how much money they are raking in? Well, I looked it up, and in 2004, it was 84 million dollars. It seems like more than enough money to maintain the bridge, but apparently over 50% of the sum is used to help support ferry and bus service in the area.

One misconception, which I had heard several times and actually believed, is that the bridge is continually being painted - When they get to one end, they just start painting again at the other end. Well, according to the bridge's website, the bridge has only been completely painted a couple of times in its lifetime, though touch up work is done from time to time. Oh, by the way, the official color of the bridge is orange vermilion, deemed "International Orange," and was selected to help blend the bridge into its surroundings.

Lime Point Lighthouse can be seen in the movie Yours, Mine and Ours.


Don't blink or you will miss this one.