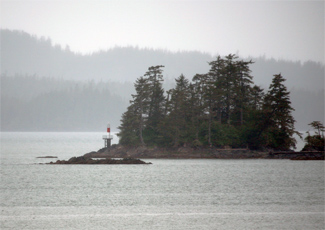 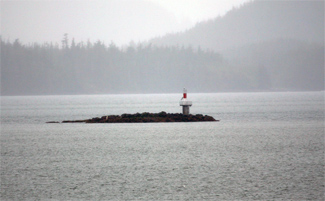 Lawyer Islands are situated along the Inside Passage, just off the mouth of the Skeena River and roughly twenty kilometers (thirteen miles) south of Prince Rupert. According to local legend, naval officers noted that two rocks near the islands were known as Client Rock and Bribery Rock and decided that an appropriate name for them would be Lawyer Islands.

The islands were set apart for lighthouse purposes by the dominion government in 1899, but it wasnt until July 1901 that the steamer Quadra offloaded construction materials on the largest of the islands. A work crew labored on the island for a few months, and when the Quadra returned in November, G.F. Grant, the ships first engineer, installed the lantern.

The following information on Lawyer Islands Lighthouse appears in the Annual Report of the Department of Marine for 1901:

A lighthouse was put in operation on November 28, 1901, on the northernmost island of the Lawyer group, on the eastern side of Malacca passage, southern entrance to Chatham sound.

The lighthouse stands on a site 10 feet above high water mark, on the western side of the island, 780 feet from its north-west end. It consists of a square wooden tower, rising from the western corner of a square wooden dwelling, surmounted by a polygonal iron lantern. The tower is 48 feet high from its sills to the vane on the lantern, and the whole building is painted white with the roof and lantern red.

The light is a fixed white light, elevated 55 feet above high water mark, and should be visible 13 miles, over an arc of 231 degrees between the bearings of N. 73 degrees W., through north and east to S. 22° E. Between the bearings of N. 73° ,W. and N. 65 degrees W. the light will be obscured at intervals by trees. The illuminating apparatus is dioptric, of the fifth order.

The light buildings were erected by the department by day labour, under the foremanship of Mr. Joseph Dixon, with materials purchased in Vancouver and taken to the site by the Quadra. The total cost of establishing this important station was $6,892.00.

Keeper Thomas W. Harvey, who for two years had been in charge of Sands Heads Lighthouse at the mouth of the Fraser River, was transferred to Lawyer Islands to take charge of the new light. The following year, trees that were obstructing the light were cut down at a cost of $100.

On February 18, 1905, Keeper Harvey left in the stations sailboat headed for Oceanic Cannery, on nearby Smith Island. When he failed to return, Hannah Harvey, the keepers wife, operated the light and lit a large bonfire to attract attention to her plight.

A telegram, stating that Keeper Harvey was missing, reached Victoria on February 25, and the marine agent immediately dispatched the Kestrel, under the command of Captain Newcombe, to investigate. A portion of the mast and sail from Keeper Harveys boat was found on Finlayson Island, but no trace of his body or the rest of the boat could be found. A Mr. Byrnes assumed responsibility for the light a few days after the accident, and Hannah Harvey and her daughter were taken to Inverness Cannery, at the mouth of the Skeena River. Frederick Elsterman was appointed the second keeper of Lawyer Islands Lighthouse on April 1, 1905, and around that time, the Quadra called at the station to retrieve the household goods of Hannah Harvey, who had already been taken to Vancouver.

Mariners were not happy with the visibility of Lawyers Island Lighthouse, so in June 1909, work began on a new tower, situated on the highest point of the island, 500 feet north of the original lighthouse. This wooden, octagonal tower stood sixty-six feet tall and was capped by the lantern room and lens taken from the old lighthouse. The work was performed by days labour under J.F. Redmond at a cost of $7,808.66. With a focal plane of 126 feet, the new light could be seen for seventeen miles.

The steamer Bertha was passing Lawyer Islands on February 12, 1912, when Keeper Elsterman signaled her to stop and set off to meet the vessel in a small boat. A distraught Elsterman related how the previous day his wife and son left for Prince Rupert but their boat had capsized within view of the lighthouse. Keeper Elsterman witnessed the accident but was unable to render any assistance. The news of the double drowning was wired to Victoria, and a launch was dispatched from Prince Rupert to search for the bodies.

Elsterman remained on Lawyer Islands for another decade, and during this time the light was changed in July 1917 to group flashing catoptric with the following repeating characteristic: flash, four seconds of light, flash, four seconds of light, flash, sixteen-second eclipse. At the same time, the illuminant was changed to petroleum vapour burned under an incandescent mantle. The intensity of the flashes was 20,000 candlepower, forty times stronger than the fixed light.

In 1923, a fog alarm building, equipped with engines and compressors for sounding a diaphone horn, was added to one side of the keeper's dwelling under contract by E.H. Shockley.

A new dwelling and fog alarm building were built on the island in 1958 by Northwest Construction Ltd. for $30,445. The wooden, octagonal was still listed in a 1959 Light List, but by 1965, it had been replaced by a square, steel, pyramidal tower of roughly the same height.

Lawyer Islands Lighthouse was de-staffed in 1988 along with four other lighthouses in British Columbia at Lucy Island, Pointer Island, Amphitrite Point, and Sheringham Point. A diesel generator was set up to power the light, which could be remotely monitored from Prince Rupert. Andrew Findlay, the last keeper, was transferred to Boat Bluff Lighthouse on July 15, 1988, and the keepers dwelling was boarded up, with demolition planned for two months later.

Sometime between 2006 and 2011, the skeletal tower atop the largest of the Lawyer Islands was removed, and instead the islands were marked by two cylindrical, white towers with red bands near the tops. One of the flashing white lights was placed on the southern tip of the islands, and the other on Cruice Rock at the northern end. A covering of dense trees hides and evidence of the islands earlier lighthouses and dwellings.

For a larger map of Lawyer Islands Lighthouse, click the lighthouse in the above map.

The modern lights on Lawyer Islands are best seen from the water and are visible from the Inside Passage ferry that connects Prince Rupert and Port Hardy.

The lights are owned by the Canadian Coast Guard. Grounds/tower closed.