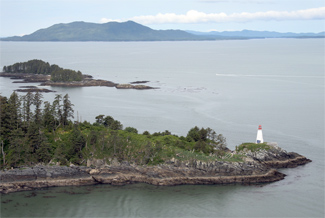 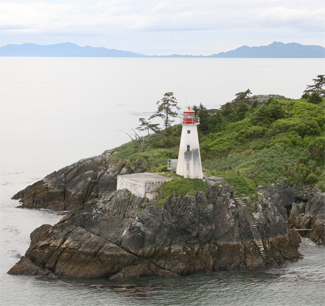 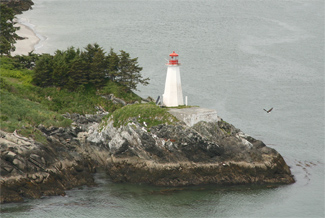 Lucy Islands consist of a group of wooded islands and bare rocks situated near the center of Chatham Sound, roughly seventeen kilometres (eleven miles) west of Prince Rupert. The easternmost and highest island in the archipelago was named Lucy Island by Captain George Henry Richards of HMS Hecate in honor of Lucy McNeill, Daughter of Captain William H. McNeill of the Hudsons Bay Company. Lucy married Hamilton Moffat also of the Hudsons Bay Company, and she was reportedly so adaptable that she could occupy the VIP cabin aboard the Labouchereand then set off in a canoe for weeks of weather-exposed travel to Indian villages.

A lighthouse for Lucy Islands was requested in 1904 by Mr. Macpherson, a Member of Parliament, and the project was endorsed by William P. Anderson, chief engineer of the Department of Marine, the following year. Lumber and material for the lighthouse were shipped north from Victoria aboard the steamer Cascade, and Mr. G. H. Frost, the supervisor of the project, followed suit on October 11, 1906, accompanied by a few carpenters and his wife and daughter.

Details regarding the lighthouse, which took just a couple of months to build and cost $7059.04, were broadcast to mariners by the Department of Marine:

A lighthouse was established on the northeast extremity of the easternmost Lucy island, and was put in operation on January 1, 1907. The lighthouse consists of a rectangular wooden dwelling, painted white with roof red, surmounted by a white square wooden lantern rising from the middle of its hip roof. The building is 36 feet high from its base to the top of the ventilator on the lantern. The light is fixed white dioptric of the fifth order, elevated 65 feet above high water mark, and visible thirteen miles, over an arc of 252 degrees.

L. Linbloom (or Lindblow) was hired as the first keeper of Lucy Islands Lighthouse. After Lindbloom had been on the job for about nine months, boats passing the lighthouse reported that something must be wrong at the station, presumably because the light was out. Help sent out to the island found the keeper had suffered a paralytic shock and was scarcely able to move. Keeper Lindbloom was carried to a boat and taken to a hospital in Port Simpson.

Born in Quebec, Octave Ouellette was given up for adoption at the age of eight and traveled the world with his new parents, trapeze artists for the Barnum and Bailey Circus, before returning to his childhood home. After marrying and welcoming two children to the world, Ouellette decided to seek his fortunes out west in Prince Rupert, the planned western terminus of the Grand Trunk Pacific Railway. When working for the railway at thirty-seven-and-a-half cents a day proved barely enough to support a family, Octave took to drinking. Therese, his wife, felt betrayed and alone.

On a sunny Sunday in June 1910, the tiny French-Canadian community in Prince Rupert headed out to Lucy Islands for a summer picnic. The islands sandy beaches and natural beauty struck the Ouellettes, and when the resident keeper expressed a longing for civilization, the Ouellettes sensed an opportunity for their family. Tharsyle Ouellette later recorded how the island drew her mother in:

An idea is a plant which sprouts quickly, especially in ground as well prepared as my mothers ear. In less time than I take to write it, she saw the possibility of coming to establish in this enchanting place, far from the moral and material ugliness of the town she abhorred. She was seeing her children grow in the clear morning spaces, the happiness of her family safe, hidden in this asylum under the eye of God. She looked at my Dad. Her eyes must have been quite eloquent, as he read them like an open book. He also had had enough of this hopeless life he was living for the past months, and for him to become a hermit would only be another feather in his cap. It was worth the try. Back on the boat  the little flame of hope lit in their heart made their eyes shine almost as much as the stars, lighting up one by one in the sky.

Back in Prince Rupert, Octave Ouellette visited the marine department, and a month later the Ouellettes were settling in at their new home on Lucy Island. When the inspector visited the island the following year, he was astonished at the transformation. A sizeable plot had been cleared and planted, a chicken coop had been built, and all the buildings had been painted. Tharsyle found her new home to be a corner of Eden.

In August 1913, Octave delivered his fourth child at the lighthouse, and the couple named her Lucy, after their paradisaical home. When the couples fifth child was set to arrive in 1919, Therese insisted on giving birth in a hospital. This decision would destroy the family. Though a baby girl arrived in perfect condition, Therese contracted the Spanish influenza at the hospital and passed away. Octave came ashore for the funeral, found a couple willing to adopt the newborn, and then tendered his resignation. After packing up his belongings back on Lucy Island, Octave took his four oldest children back to Quebec, where he placed them in an orphanage. Young Lucy, the islands namesake and a reminder of the familys happy home, died not long after arriving in Quebec.

A fourth-order lens was installed at Lucy Islands Lighthouse in 1924, and in 1927, an air diaphone, housed in a frame building next to the lighthouse, was placed in operation. Frank Glinn served as head keeper at Lucy Island from 1945 until 1963 and during this period witnessed the construction of the present octagonal, concrete tower in 1960. Stange Construction was hired to erect the lighthouse along with a new single dwelling.

In 1963, Keeper Glinn and his wife Elenore welcomed Francisca Grey to Lucy Island. Described as a pretty little dark-eyed woman who had never before left her Guatemalan homeland, Francisca had come to join her assistant keeper husband Ron Grey, who she had only seen for one day during the past two years. The couple met in Guatemala when Ron was there on government work. They were married in 1959, but when Ron returned to Canada and became a lighthouse keeper, Francisca and their twelve-year-old adopted daughter Edna were unable to immediately join him due to immigration issues.

Frank and Elenore Glinn had welcomed another woman to the island in 1953, but for Tharsyle Ouellette it was a return visit, and her childhood lighthouse was still standing at that time. Tharsyle got to sleep in her bedroom from forty years earlier, the one where her mother had tucked her and her siblings into bed with a bedtime story about their fairytale home:

Once upon a time there were four little children who had parents who loved them very much. They were living on a marvelously beautiful island full of birds, flowers and tasty fruits. The trees were so high that their hands disappeared in the azure sky. Three beautiful beaches of fine sands; one red, one grey and one white, lent themselves for their games. The immense ocean was their swimming pool

In 1987, the Canadian Coast Guard backed away from a plan to drastically reduce the number of staffed west coast lighthouses, but five lighthouses still lost their keepers the next year: Lawyer Island, Lucy Island, Pointer Island, Amphitrite Point, and Sheringham Point. Ike Pronk, the stations last keeper, was transferred to McInnes Lighthouse in July 1988, and a contractor burned the keepers dwelling the next month.

Lucy Islands are now home to a thriving colony of rhinoceros auklet. For at least a few years, the Rotary Clubs of Prince Rupert maintained the boardwalk that linked the lighthouse to a helicopter pad on the opposite side of the island, but it now seems the concrete tower is the sole reminder of the island's human inhabitants who kept the surrounding waters safe for mariners.

For a larger map of Lucy Islands Lighthouse, click the lighthouse in the above map.

Lucy Islands Lighthouse can be seen from ferries passing between Prince Rupert and Ketchikan, Alaska.