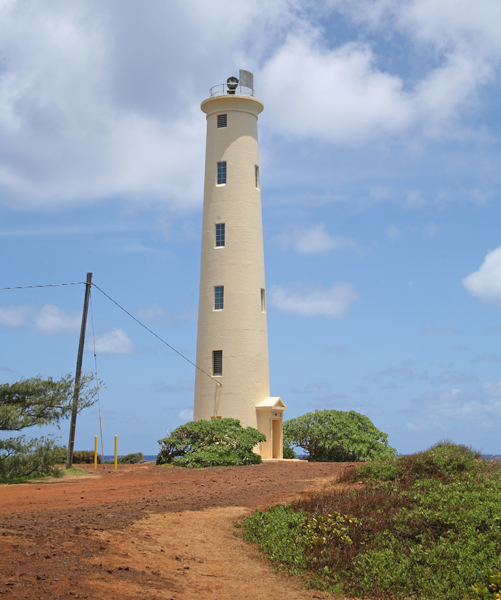 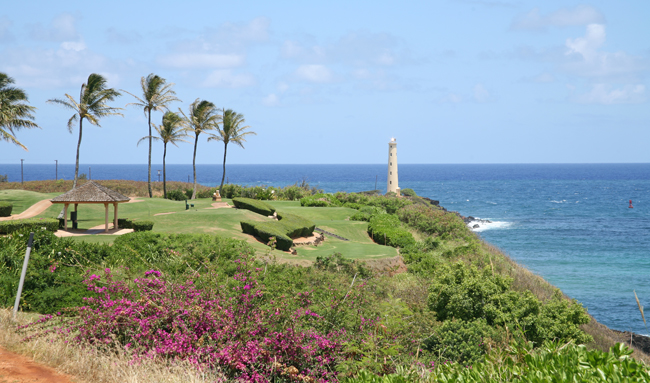 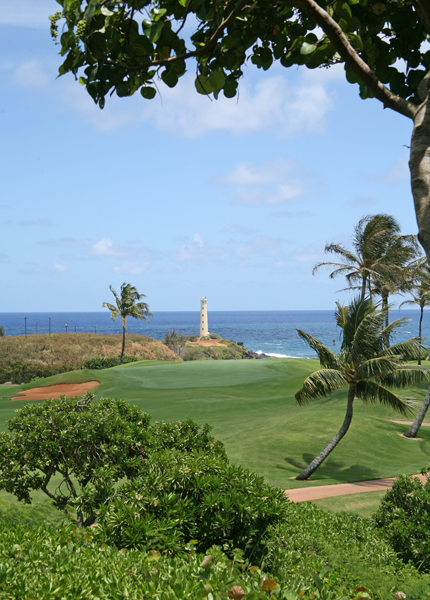 Hawai`is only navigable river, the Wailua River, is found on Kaua`i, however, no natural deepwater harbors exist along the islands entire coastline. To remedy this situation, a portion of Nawiliwili Bay, near Lihue, was dredged and protected by a breakwater to form Nawiliwili Harbor. The origin of the name Nawiliwili is disputed. One claim is that it comes from Wiliwili trees, which once grew in the area. A more imaginative claim is that it comes from the profile of Queen Victoria in the nearby Haupu Ridge. According to tradition, the queen is shaking an admonishing forefinger at Kaiser Wilhelm, her unpredictable nephew, and saying Now Wili Wili!

Ninini Point, which marks the northern entrance to Nawiliwili Bay, was leased by the Hawaiian government from the Lihue Plantation in 1897 as a site for a lighthouse, and several light structures have served on the point over the years. The first was a forty-foot, wooden, frame tower surmounted by a lamp room that housed a light and reflector at an elevation of seventy feet above the sea.

The lights first keeper, Manuel Souza, was born on the U.S. mainland to Portuguese parents, but as a youngster he followed the sea and eventually ended up in Hawai`i. His future wife, also of Portuguese descent, came to Hawai`i from the island of Madeira as a contract laborer for a sugar plantation. Souza bought out her contract, and together they lived at the lighthouse for six years.

Each evening before sunset, Souza would climb the tower, light the oil lamp, and place it along with its reflector behind the glass window that formed a corner of the small lamp room. The light would have to be tended during the night, and then around sunrise, Souza would extinguish the lamp, polish the reflector, and prepare the lamp for the next evening.

Besides caring for the light, Souza also maintained the tower along with the keepers house and grounds. For his efforts, he was given a meager monthly salary, which arrived irregularly forcing him to obtain credit from the local store to feed his family. In 1902, Souza wrote to the Hawaiian government with his grievances.

I have been working steadily for five years in a place that is about 3 miles from any house or supplies. ... Cant my wages be raised for my present payment is too small to support my family. Besides my food, water costs me 50 cents a bucket and firewoods are the worst of all. I also spend my own money in preparing the lighthouse, such as painting it with white wash, etc. So with these few words I await your answer. P.S. Answer soon.

His plea must not have been answered to his liking as Souza resigned the following year. Conditions at the station continued to degrade until the United States assumed control of Hawaiis navigational aids in 1904. In a report that year, the Lighthouse Board found that, The lamp was out of repair, and the room on the tower needed to be rebuilt. ...The tower is dilapidated and unsafe. The dwelling is not fit for human habitation. There is no oilhouse.

The room on top of the original Nawiliwili trestle tower was removed in 1904 and replaced with a small box locker that supported a lens lantern. Two years later, the entire tower was torn down, and a thirty-three-and-a-half-foot-tall mast topped by a lens lantern was established on the point. The mast light, which had a small white service house at its base, was first exhibited on December 22, 1906. The keepers would climb the mast to service the light each day via galvanized spikes set into both sides of the pole.

James McLaughlin served as keeper of the light from 1904 until he was transferred to Oahu in 1909 to take charge of the new light on Makapu`u Point. Keeper McLaughlin had managed to transform the isolated and naturally barren point into a place of beauty, and his friends hated to see him leave. As the time of his departure drew near, the local paper noted that McLaughlin had planted a number of trees around the house and says they are great company to him in the lonely hours which he must pass in his cottage at the light-house. He has named each of the trees after one of his Lihue acquaintances, and they afford him some spirited conversations at times, which their namesakes would doubtless be much interested in hearing.

Queen Victoria isnt the only person whose profile is captured in rock on Kauai. A young lady was part of a group visiting Keeper McLaughlin at Nawiliwili Lighthouse in 1909 when she suddenly called out Look at the man! Everyone looked around, but no one was unable to locate the man until the young lady pointed out the profile of a mans head that had been carved into a rock on the point by wind and water. I have been here four years, and never took notice of it before, said Keeper McLaughlin, who soon set to work painting the mans features so they would be even more obvious. They even gave him a name - Jack.

The Lighthouse Service sent the following request to Congress in 1929 for funds to construct a more permanent lighthouse on Ninini Point:

At present there is no landfall light on the island of Kauai for westbound vessels. There is a considerable volume of shipping bound direct to Kauai ports from the Pacific coast, in addition to interisland traffic. Nawiliwili Harbor Light is on the easternmost point of this island, situated at the entrance to Nawiliwili Harbor which, when improvements now nearing completion are finished, will be the principal port on Kauai. There is urgent need for a high-powered long-range light on this point to replace the minor light now in service, which is wholly inadequate, and this improvement has been urged by all maritime interests operating in these waters. It is proposed to construct a 72-foot reinforced concrete tower supporting a fourth-order lantern and to install a fourth-order flashing lens with adequate illumination. It is essential that work on this improvement at at total estimated cost of $22,000, be commenced as soon as practicable.

Funds were soon granted, and a thirty-six-inch revolving airways beacon was installed atop a temporary forty-foot, wooden tower on July 21, 1931 to serve navigation while the new tower was under construction. The present seventy-two-foot concrete tower was constructed in 1932 along with a new three-bedroom keepers dwelling set on concrete block footings. The airways beacon was transferred from the temporary tower to the concrete tower on November 15, 1932. To ensure continuous operation of the light, an additional thirty-six-inch beacon was mounted on a welded superstructure above the beacon placed on the concrete deck of the tower. If one beacon failed, an alarm would sound so that the keeper could immediately place the other in operation. Two generator units were housed in the first story of the tower to provide electricity for the light and for the keepers dwelling.

Keeper Kua, who had been assigned to Nawiliwili Light in 1918, was retained as keeper of the new lighthouse, and he served for a total of twenty-one years at the station before finally retiring in 1939 when the Coast Guard took control of the light.

During World War II, Nawiliwili Lighthouse, along with all others in the Hawaiian Islands, was darkened. On December 31, 1941, a Japanese submarine surfaced near the entrance of the bay and shelled the harbor. Fortunately, several of the shells, including one that made a direct hit on a large gasoline storage tank, failed to explode, and damage was limited to about $500. Fears of a possible Japanese invasion led to the stationing of additional Coast Guard personnel at both the Nawiliwili and Kilauea light stations.

Nawiliwili Lighthouse was automated in 1953, however an attendant remained at the station and was responsible for routine maintenance of Nawiliwili Light and seven minor lights on the island. The lantern room has been removed from the tower, compromising the structures beauty.

For a larger map of Nawiliwili Lighthouse, click the lighthouse in the above map.

Starting from the Lihue airport, take Highway 570 to Highway 51. Turn left on Highway 51 and after 0.4 miles turn left into an entrance with a gatehouse. Just tell the guard you want to visit the Nawiliwili Lighthouse and follow the road as it skirts the airport runway, cuts through a golf course and leads you to the base of the lighthouse.


An unforgettable experience on Kaua`i is taking a helicopter tour of the island. The helicopters leave near the airport in Lihue, and a good view of the Nawiliwili Lighthouse is had shortly after takeoff. As you pass over the island, you will see the amazing Waimea Canyon, the incredible Na Pali Coast, and numerous waterfalls lacing the verdant hills. If it is within your budget, a stay at the Kaua`i Marriott provides excellent views of the lighthouse as well as two great golf courses and Kaua`i's largest pool.

The Nawiliwili Lighthouse is located right at the end of one of the two runways for the Lihue Airport. Jets pass right by the lighthouse as they approach for a landing on Kaua'i.


I walked through the golf course to visit the light. Not being a golfer myself, I felt a little weird being out there with no equipment or cart, but the lushness of the golf course only added to the surrounding beauty of the light.