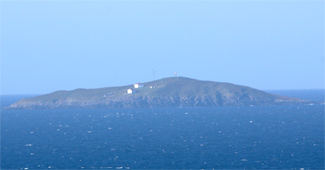 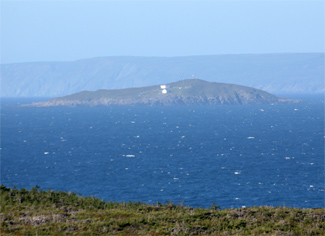 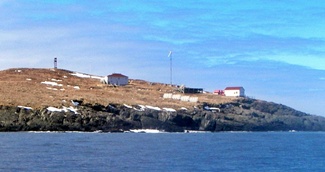 Green Island is located off the southwest tip of the Burin Peninsula, roughly halfway to Île Miquelon. Work on a light and fog alarm station on the island started in 1907. The original buildings included an engine house, a storehouse, a keepers dwelling, and a circular iron lighthouse that was placed on the apex of the island. All the buildings were painted in red and white vertical stripes, save the lighthouse, which was painted red.

The fog alarm commenced operation in 1908, giving a three-second blast every ninety seconds during thick or foggy weather, but the light was not activated until the following year. With a focal plane of nearly forty-two metres, the fourth-order occulting white light, alternately showed two-and-a-half seconds of light followed by two-and-a-half seconds of darkness. The first keeper on Green Island was Robert F. Forsey.

In 1955 a square, pyramidal, open-framework tower topped by a red lantern started serving as the lighthouse on Green Island. This structure was in use until a square skeleton tower with a red and white daymark was erected in 1993. Its light produces a white flash every ten seconds, while the fog signal produces a four-second blast each minute as needed.

During the first week of November, 2010, a Senate committee toured several lighthouses in Newfoundland and held town meetings in order to come up with recommendations on staffing levels for lighthouses. This move was in response to an announcement by the Coast Guard in 2009 to gradually de-staff all lighthouses through attrition. At that time, there were fifty-one staffed stations in Canada: twenty-three in Newfoundland and Labrador, twenty-seven in British Columbia, and one in New Brunswick.

The senators flew by helicopter to Green Island, where they learned firsthand from the keepers how they had pulled Michel, a local mariner, and his mother out of the water and onto their ramp just a few weeks earlier. The pair had left Fortune bound to Saint-Pierre and Miquelon in an eighteen-foot boat, when they encountered sudden bad weather. Had it not been for the keepers on Green Island, they likely would have drowned. Michel showed up at a town meeting held in Fortune to meet the Senators and tell them how the keepers had saved his life.

When Michel left Fortune the water was dead calm, but the wind picked up and quickly turned the water white. Michel and his mother were hosted by the keepers for five days before the weather cleared and they were able to reach home.

Charlie Dominaux, who has been Captain of the ferry Arethusa that operates between Fortune and Saint-Pierre and Miquelon for nineteen years, told the Senators of the invaluable weather reports provided by the keepers on Green Island. Captain Dominaux recounted occasions when the weather forecast was twenty-five knots when he left Fortune, but when he called Green Island, the wind was exceeding thirty-five knots and the sea was building. A follow-up call to the keepers revealed the winds had risen to forty-five knots at the island, and the captain wisely turned the ferry around. These up-to-the-minute forecasts were highly valued by Captain Dominaux as strong currents and winds create unpredictable, rapidly changing conditions around Green Island.

The input provided by Michel and Captain Dominaux was included in the Senators December 2010 report entitled Seeing the Light, and presented as testimony in the Senate. Following the input from the committee, Gail Shea, Minister of Fisheries and Oceans, announced the cancellation of its plans to de-staff lighthouses in early March of 2011. Green Island is situated near the international fishing boundary established between France and Canada, and one Senator stated that there may well be sovereignty reasons for keeping a human presence on the island.

For a larger map of Green Island (Fortune Bay) Lighthouse, click the lighthouse in the above map.

You can get a distant view of Green Island Lighthouse from a pullout just north of Port May, but the island is best seen by boat or from the air. A good view is possible from the ferry to Saint-Pierre & Miquelon.