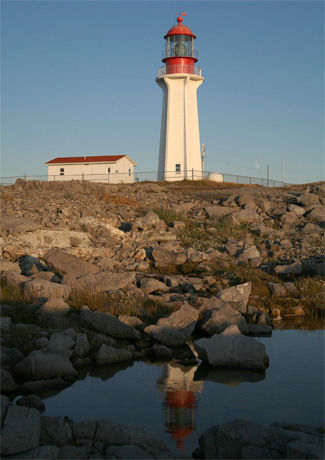 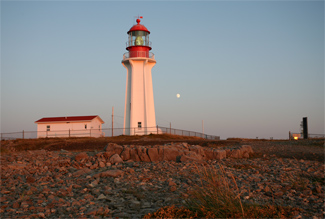 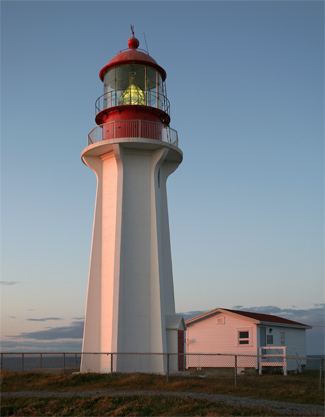 The Ferolle Peninsula juts out into the Strait of Belle Island from Newfoundlands Great Northern Peninsula, roughly midway between Port au Choix and Flowers Cove. Basque fishermen are believed to have named the peninsula after the fishing village of El Ferolle, near Corunna in northern Spain. Today, the three small communities of New Ferolle, Shoal Cove, and Reefs Harbour are located on the peninsula. In 1860, John Page, Chief Engineer of the Department of Public Works for the Province of Canada, submitted a report on the comparative advantages of various proposed locations for new lighthouses. Included among the roughly twenty locations were these four along the Strait of Belle Isle, which runs between the Great Northern Peninsula and the Labrador coast: Northeast end of Belle Isle, Cape Bauld, Cape Norman, and Point Ferolle. Lighthouses had recently been completed at the South end of Belle Isle and Point Amour on the Labrador coast, but additional aids were needed to mark the southern side of the strait.

Page provided the following description and merits of Point Ferolle:

This headland is on the Newfoundland side of the Gulf, near the western entrance, through the strait lying S.S.W. 28 ½ miles from Point Amour, 21 ¼ miles from Greenly Island, and N. E. by E. 22 miles from Point Rich; it is flat and of moderate height, but stands out prominently, and appears like an island when seen from a distance: it is, however, connected with the main land by a very narrow neck, which separates the Bay of St. John from New Ferolle Bay.

A short distance back from the shore, it is wooded with spruce and other trees, some of which are of good size, but they are generally small and stunted; fresh water ponds are abundant in the interior.

The place marked out as the most advantageous site for a Light-house here, is 55 feet over the level of the sea, 200 feet south from high water mark, and about one-third of a mile from the extreme S. W. point, which forms the N. E. side of the Bay of St. John, and within a short distance of three fresh water ponds, one of which is fully 2 ½ acres area.

A tower 85 feet in height, fitted up with a second order light, would, in my opinion (in which many intelligent naval gentlemen concur), be of more importance and service in promoting the safety of the navigation, than one on any other place that could be selected at or near the west end of the strait of Belle Isle.

Even though Page ranked the need for a lighthouse at Point Ferolle higher than the other three sites he examined along the Strait of Belle Isle, these other locations would receive a light before Point Ferolle. A lighthouse was built at Cape Norman in 1871. Cape Bauld received a light in 1884, and the Northeast end of Belle Isle was marked in 1905.

The merits of Point Ferolle, as noted by John Page in 1860, finally brought a light to the point in 1913. Work on the lighthouse, a fog alarm building, a double dwelling for the keepers, an oil house, and a combined boathouse and storehouse started in 1911, and the station was completed in 1913. The construction was performed by day labour under the direction of various supervisors. T. Thibodeau was in charge in 1911, D. Bilodeau in 1912, and F. E. Cote and E. Lavergue in 1913.

The diaphone fog alarm installed at the point sounded three, two-and-a-half-second blasts, with intervals of three seconds between them, in each minute. The rectangular, two-storey, double dwelling was situated seventy-five feet south of the lighthouse.

Demase Beaudoin, of Montmagny, Quebec, relocated his wife and six children to Newfoundland to become the first keeper of Point Ferolle Lighthouse, initiating a tradition of lightkeeping in the Beaudoin family. When Damase retired, his son Aime Guy was appointed keeper. Aime Guy had sixteen children, eight boys and eight girls, and his son Edmond took charge of the light with the passing of Aime in 1953. When Edmond was transferred to another station, his brother Jerome, who had been serving as assistant keeper, was promoted to head keeper.

In 1967, the station was converted to generated electricity, and new fog alarm equipment was installed. Commercial electricity arrived in 1970, and by that time the old double dwelling had been replaced by two bungalows. A new fog alarm building was built in 1976. Although New Ferolle Lighthouse remains a staffed station, the only structures remaining on the point are the lighthouse, a modern foghorn, and a small structure that serves as an office for the keepers.

Jaye Roberts made history in 2005 when she became principal keeper of New Ferolle Lighthouse as it was the first time a woman had served as a principal keeper in Newfoundland. Roberts remembers climbing the stairs of a lighthouse on Bell Island years ago with her grandfather as he carried a can of oil up to light the light. Its not like the way it was when my grandfather was doing this, she said. It is pretty much maintenance now, but the fishermen still have a little bit of security knowing that the station is there.

For a larger map of New Férolle Peninsula Lighthouse, click the lighthouse in the above map.

From Saint Barbe, where the ferry to Labrador docks, travel south on Route 430 for 34.5 km (21.6 miles), and then turn west toward Reef's Harbour and Shoal Cove. Travel on this road for 14.5 km (10.7 miles), passing through these two communities, to reach New Ferolle, where you need to turn left and then continue 2.7 km (1.7 miles) to reach New Férolle Lighthouse. The road beyond New Ferolle is unpaved and a bit rough.