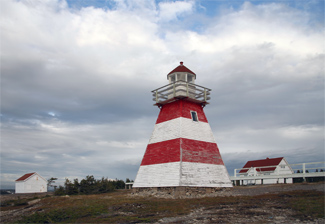 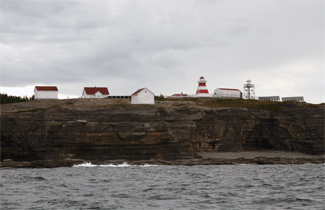 When Captain James Cook charted the western shore of Newfoundland in 1766, he named Keppel Island after August Keppel, a member of the British House of Commons who would later become First Lord of the Admiralty.

As Keppel Island marks the southern side of the entrance to Port Saunders and the northern side of the entrance to Hawkes Bay, it is not surprising that a lighthouse was erected on the island in 1901. This tower, a square, wooden, pyramidal structure topped by an octagonal lantern remains standing today, though its function was taken over by a modern skeletal tower in 1992.

The historic tower, which is painted with red and white horizontal bands, originally exhibited a fixed white sixth-order dioptric light at a height of 32.6 metres (107 feet) above high water. By 1909, a steamer from Bay of Islands was calling at Port Saunders weekly during the summer and autumn, and a steamer from Halifax visited each month.

As Port Saunders was part of the French Shore, settlement here was delayed as the French controlled fishing along the coast. The French had fishing premises on Keppel Island in the 1860s and would salt and dry their fish before sending it back to France.

A lobster cannery was established at Port Saunders in 1880 by a Mr. Forsey of Halifax, and the industry attracted the first permanent settlers to the area. The cannery was taken over by Shearer and Forest, and in 1887 Lieutenant J Masterman, R.N., Commander of H.M.S. Bullfrog, sent a letter to Mr. Shearer informing him of the problems his operation was causing.

Having received from Captain Humann, Senior French Naval Officer, Newfoundland, a notification to the effect that the fishing station of Keppel Island and Port Saunders has been allotted next year to one of their ships, and that the factory you work in Port Saunders will interfere very much with their fishing if carried on as at present, I have to inform you that you will continue working your factory next season at great risk, for on any reasonable complaint on the part of the French of your operations interfering with the full enjoyment of their fishing rights, your factory will be suppressed.

On June 17, 1889, the French warship Bison destroyed several lobster traps at Port Saunders, and the following summer another French warship destroyed 500 traps in the vicinity. The conflict between the French fishermen and British settlers would continue until the French renounced its claims in 1904.

The original kerosene light used in Keppel Island Lighthouse was changed in 1931 to a flashing white light fueled by acetylene gas.

In 1957, a keeper's dwelling was built along with a fog alarm building, a storage building at the landing wharf, and a storage building near the lighthouse. A type 'F' diaphone fog alarm, operated on compressed air produce by an oil engine, commenced operation in September 1958.

Moses Lavers was appointed keeper of the new fog alarm. The Lavers had six children who lived on the island year-round, taking a boat to school each day. Keeper Laver served for nearly thirty years on Keppel Island, retiring in 1987.

A second dwelling was built to house an assistant keeper in 1969, and in 1976 an electronic fog signal replaced the diaphone horn, and the light was converted to diesel generated electricity. The station was staffed until 1989, and a new fully-automated light was erected in 1992.

The town of Port Saunders owns all the buildings at the station, except the modern skeletal tower, and initially planned to develop the site for tourism. The plans were apparently abandoned as in 2013, the two keeper's dwellings, three sheds, and five acres on Keppel Island were placed on the market for $250,000.

For a larger map of Keppel Island Lighthouse, click the lighthouse in the above map.

From Route 430 on the Great Northern Peninsula, turn west and drive 5.6 km (3.5 miles) to Port Saunders. Once in town turn left on Church Street toward the harbour, and then right onto Marine Drive. Follow Marine Drive along the shore, and then turn left onto a road as you near the point. At the end of this road, you will find the trailhead for Crow Head Walking Trail, from which you will get this profile view of Keppel Island Lighthouse. You can also get this distant view of the lighthouse from the road that leads from Port Saunders to Port Au Choix. Of course, the best views are had by taking a private boat over to the island from Port Saunders.

The lighthouse is managed by the Town of Port Saunders. Grounds open, tower closed.