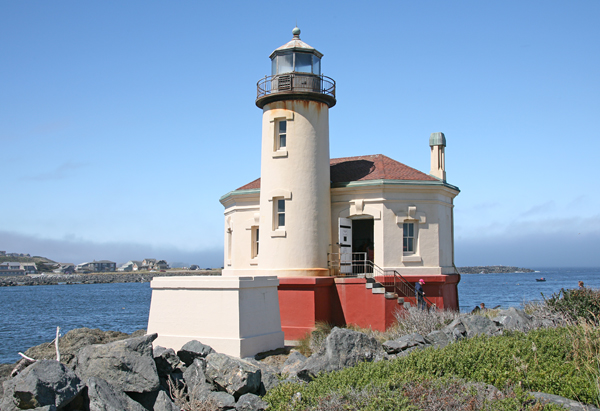 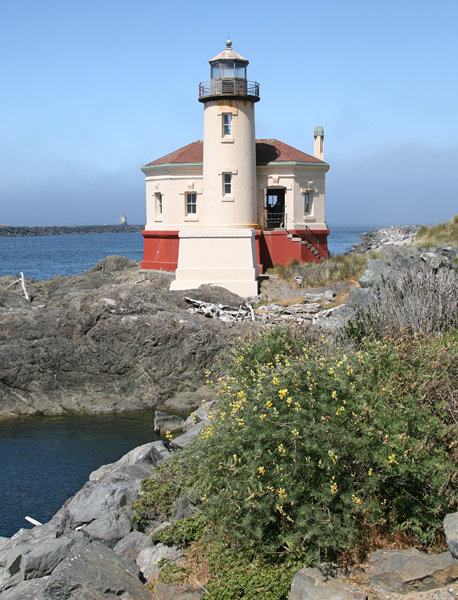 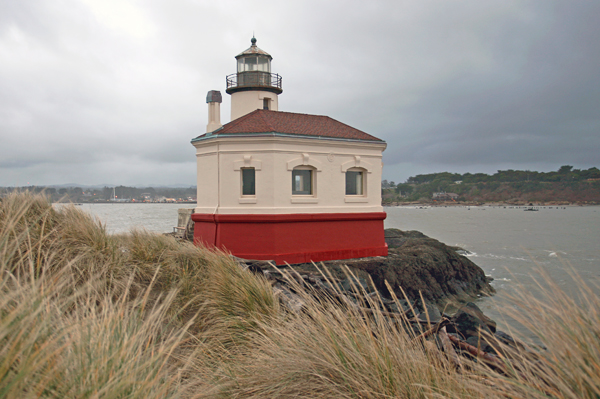 The area around the present-day town of Bandon was inhabited by the Coquille Indians when white settlers started to arrive in 1850. The town site was settled in 1853 and initially called Averill, but a year after the arrival of several immigrants from Bandon, Ireland in 1873, the towns name was changed to Bandon. Adjacent to the town, the Coquille River empties into the Pacific Ocean. The river extends inland a great distance and was a natural link to the virgin stands of timber in the area, but the bar at the mouth of the river, formed by the interaction of the river and ocean, was a major obstacle for ships entering the river. At times, only a few feet of water would cover the bar, but vessels still attempted to navigate the river in hopes of reaping the rewards that lay upstream. In 1880, Congress passed a bill funding the construction of a jetty on the south side of the rivers entrance that created a deep channel, resulting in a rapid rise in the number of ships entering the river.

A lighthouse at the entrance to Coquille River was the next logical step for improving navigation, and in 1890 the Lighthouse Board used the following language to request funds for it.

A light of the fourth order with a fog-signal, at this point, would enable vessels bound into the river to hold on close to the bar during the night so that they would be in a position to cross at the next high water. The light would also serve as a coast light and would be of much service to vessels bound up and down the river.

Congress appropriated $50,000 for the project on March 3, 1891, but it would be four years before land was purchased, plans were solidified, and the construction crew was assembled.

Workers and supplies arrived on scene in April 1895, and one of the first tasks was to level the top of Rackliff Rock to provide a base for the lighthouse. Local stone was cut to form the structures foundation, while the lighthouse itself was built of brick, covered with a layer of stucco. The design was unique with a cylindrical tower attached to the east side of an elongated, octagonal room, which housed the fog signal equipment and had a large trumpet protruding from its western wall.

A long, wooden walkway connected the lighthouse to the keepers duplex, 650 feet away. Each side of the duplex had three bedrooms, a kitchen, dining room, sitting room, and a 15,000-gallon brick cistern for storing water. A barn was located 150 feet beyond the dwelling.

James F. Barker, the first head keeper, and John M. Cowan, his assistant, were transferred to Coquille River from Heceta Head and took up residence at the new station during the first part of 1896. The fourth-order Fresnel lens was first shown from the tower on February 29, 1896, and a snowstorm settled in the next day, necessitating the first use of the fog signal.

The lens produced a fixed white light, but an occulting apparatus raised and lowered a brass cylinder around the lamps chimney to show light for twenty-eight seconds followed by a two-second eclipse. The first-class Daboll fog trumpet emitted a five-second blast every thirty seconds as needed. In 1907, oil engines powering a compressed-air plant replaced the steam plant originally used to power the fog signal.

A 5,000-gallon redwood water tank was placed atop an eight-foot-tall trestle foundation in 1898 to enhance the water supply for the steam fog signal, but just two years later, a heavy storm carried away the water tank and toppled the stations oil house. A new water tank was quickly placed atop a concrete foundation, but the oil house wasnt replaced until 1901. For protection, the new corrugated-iron oil house was built atop a concrete pier east of the lighthouse and connected to it by a bridge supported by steel beams.

In 1901, an inspector noted, The dwelling and barn are built on a bleak sand spit, and immense quantities of sand are frequently piled up around them, rendering access to the different buildings difficult and at times almost impossible. To improve life for the keepers, the area around the dwelling was planked, a new walkway was built from the dwelling to the lighthouse, and 200 feet of sand fence was erected. A boathouse was also added in 1901 to protect the stations launch, which was a critical link for procuring supplies and transporting the stations children to school.

Oscar Langlois became an assistant keeper of the lighthouse in 1910 and was promoted to head keeper in 1921. He was born at Cape Blanco Lighthouse, where his father served as principal keeper for thirty-five years. Choosing the same career for himself, Oscar accepted his first assignment in 1905 to Cape Arago Lighthouse, where met his wife, Marie Amundsen, daughter of the principal keeper.

During Langlois lengthy service at Coquille River Lighthouse, a forest fire swept into Bandon in September 1936 and consumed all but sixteen of the towns 500 buildings. The lighthouse, separated from the fire by a water barrier, was not damaged, however, ash and soot found its way into the lighthouse requiring extra work of the keepers. The sick and invalid from the hospital at Bandon were transported across the river by the lighthouse tender Rose and sheltered at the lighthouse. Keeper Langlois and Charles Walters, his assistant, were commended by the Lighthouse Service for helping refugees during the fire.

After being petitioned by maritime interests, the Lighthouse Service requested funds in 1912 to move the light and fog signal at Coquille River to the end of the south jetty. However, after $6,000 was appropriated for this change in 1916, the project was halted when others demanded that no changes be made. The money was eventually used to establish an electrically-operated fog bell on the south jetty that went into operation in 1924.

In 1939, the Coast Guard assumed responsibility for Coquille River Lighthouse and decided it was no longer needed. An automated beacon was placed at the end of the south jetty, the dwelling was disassembled, and the lighthouse was abandoned. The lighthouse stood neglected for twenty-four years, until Bullards Beach State Park was created on the north side of the river. The grounds of the original eleven-acre light station were included in the park, and the park assumed responsibility for the lighthouse.

The damage inflicted on the lighthouse by time and vandals was too much for the park system to reverse by itself, but a joint restoration effort involving the state and the Army Corps of Engineers was launched in 1976. The lighthouse's roof was repaired, bricks were replaced, and the structure received a fresh coat of paint before it was opened to the public in 1979.

As part of the Bandon centennial celebration in 1991 (the city was incorporation in 1891), a solar-powered light was placed in the tower. The lighthouse is further illuminated in December, when it is decorated with festive lights.

Violent winter storms deposit piles of driftwood on the beach near the lighthouse and have eaten away at the lighthouses foundation. To correct this problem, a restoration effort, costing over $600,000, was carried out during the summer of 2007. The project included removing damaged stucco, repainting the exterior, replacing the roof, adding a false chimney, and repairing copper flashing. The colors used to paint the lighthouse were reportedly found on some older layers of stucco, but some locals strongly oppose the new color scheme and insist that white is the historically accurate color. (Historic Light Lists have the structure painted white, but it was listed as cement colored for at least one year.)

For a larger map of Coquille River (Bandon) Lighthouse, click the lighthouse in the above map.

From Highway 101 just over two miles north of Bandon, turn west into Bullards Beach State Park and follow Park Road to where it ends at the Coquille River. Note that the lantern room is currently not accessible until the stairs in the tower can be repaired.

The tower and interior of Coquille River Lighthouse are open to the public daily from roughly 11 a.m. to 5 p.m. from mid-May through September. For current information, call the park office at (541) 347-2209.

If you are planning to stay in the area longer, you might want to consider a Bandon Beach Vacation Rentals. We met the owners at the lighthouse, where as volunteers they were firing up the generator to power the Christmas lights.