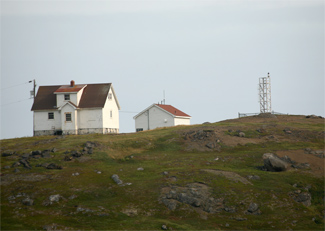 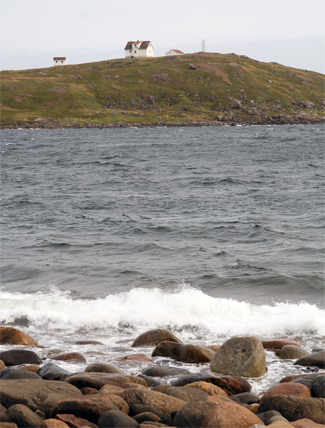 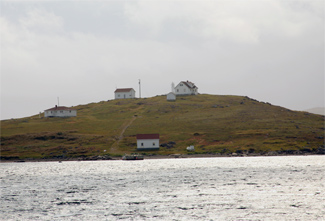 Red Bay, named for the reddish cliffs in the area, is a fishing community on the southern Labrador Coast that is sheltered by Saddle Island, which lies just offshore from the entrance to the harbour.

Saddle Island is now part of Red Bay National Historic Site of Canada, which was established to document the Basque whalers that operated from Red Bay during the sixteenth century. Right and bowhead whales were once plentiful in the coastal waters off Labrador, and Red Bay was the busiest port for the whaling industry. Whale blubber was rendered into oil on shore and then poured into wooden barrels to be shipped to Europe. Archeological research has unearthed the remains of more than twenty whaling stations along the shores of Red Bay Harbour and has led to the discovery of three sunken Basque galleons in the harbour.

Visitors to the National Historic Site can take a boat tour over to Saddle Island where they will hear stories about the Basque whalers and can take a self-guided tour that visits the sites of the islands tryworks, cooperages, and burial ground.

After the whale population was depleted, Red Bay became home to a Canadian fur trading post in the eighteenth century. During the nineteenth, century Red Bay was occupied each summer by Newfoundland fishermen. By the time of the first census in 1856, there were seventy-two people residing year-round at Red Bay. A Methodist school was established in 1871, and a Methodist church was built in 1878. Dr. Wilfred Grenfell convinced the community to start the first co-operative store in Labrador in 1896, and this business survived through the 1930s.

In 1906 a fixed white light was established on the western end of Saddle Island in the form of a lens lantern hoisted atop an open framework tower. This beacon served as a harbour light during the period of open navigation, which typically ran from June through December.

A flat-roofed keepers dwelling and an octagonal wooden tower were erected on Saddle Island in 1912. Both of these structures were painted white, and the light was changed to a sixth-order light whose signature was alternating 2.5-second periods of light and darkness. The light had a focal plane of 41.5 metres. The fuel for the light was changed from kerosene to acetylene gas in 1931, at which time the characteristic of the light became flashing white.

A fog alarm, housed in a white, flat-roofed, wooden building, was added to the station in 1936. A new fog alarm system was installed in 1950, and the following year the octagonal lighthouse was replaced by a steel frame tower with a white daymark.

As keeper of the light, Enos Yetman resided on Saddle Island for many years with his wife Winnie. Years of living in close proximity to the fog alarm damaged Enos hearing to the point where he was nearly deaf. He tolerated the condition as he no longer had to listen to the fog horn, but his family grew tired of his yelling and insisted he get hearing aids. Enos went through numerous hearing aids while serving as keeper, but after he retired and moved off the island, his hearing greatly improved as his hearing aids wouldnt quit functioning after a short period.

During a hearing checkup in St. Johns, the specialist was amazed that Enos current hearing aid had lasted so long and couldnt imagine what the problem had been with all the others. A sly grin came across Enos face prompting the specialist to enquire if he knew why the other devices had failed. Rust! Salt water causes rust! Enos had known the cause of the failures all along, but being a man of few words, he hadnt volunteered the reason until someone actually asked.

Winnie Yetman had an ear for music and taught herself to play the accordion. On calm days, the townsfolk in Red Bay could often hear accordion music drifting across the water from Saddle Island as Winnie entertained her large family. Three of her daughters inherited Winnies gift for music, and as late as 2011 this trio was still pulling out their identical Hohner Erica accordions to play some Newfoundland ballads and recall their time on Saddle Island.

A new fog alarm building and a keepers dwelling were completed in 1961, and a second dwelling was constructed in 1964. In 1967, the light was changed from battery-operated to station-generated electricity. Commercial power reached the island in 1971, and at that time an electronic fog signal was installed, and the station was fully automated.

A light that produces a white flash every five seconds is displayed from atop a square skeleton tower on Saddle Island today, and a foghorn gives a three-second blast in every thirty seconds when needed.

For a larger map of Saddle Island (Red Bay) Lighthouse, click the lighthouse in the above map.

Near the ferry landing in Blanc-Sablon, go east on Route 510 for 80.7 km (50.4 miles) until you reach Red Bay. Saddle Island is part of Red Bay National Historic Site, and ferry service to the island is provided during the summer months. A good view of Saddle Island Lighthouse can also be had by driving to the end of the one road on the western shore of Red Bay and then hiking Boney Shore Trail or Jersey Trail.


We had planned to take the boat out to Saddle Island and hike around, but it was blowing so hard (seemed it was blowing almost every day we were in Newfoundland/Labrador) that the ferry was not running. We took a couple pictures of Saddle Island from the visitor centres for the Red Bay National Historic Site, and then fortunately decided to do the short Boney Shore Trail, which provided quite good views of the light station on the island. As the name implies, whale bones, remnants of the 16th century Basque whaling conducted in the harbour, can be seen along the shore. (Collecting the bones is prohibited.) You can also climb to the top of the adjacent Jersey Hill to get an elevated view of Red Bay.