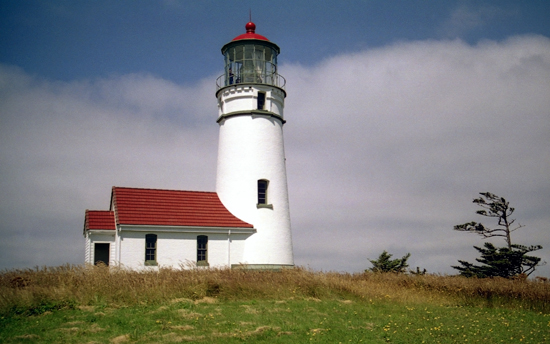 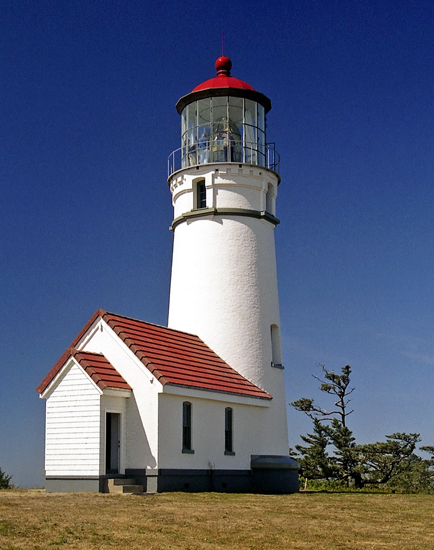 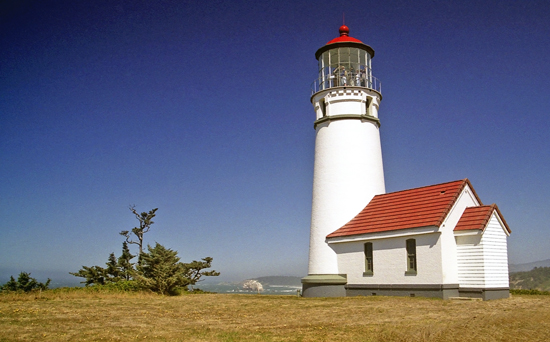 Cape Blanco juts out one-and-a-half miles into the Pacific Ocean from Oregons southern coast and terminates in a large headland with 200-foot cliffs along most of its perimeter. These chalky, white cliffs prompted early Spanish explorers to name this landmark, which is the most westerly point in Oregon, Cape Blanco or White Cape.

Before construction began on Cape Blanco Lighthouse, the site was covered with a dense spruce forest, but the trees had to be felled to prevent obstruction of the light. Besides producing a good supply of lumber, the deforestation also eliminated any chance of a forest fire endangering the station and reportedly diminished the amount of fog in the area.

Since no roads led to the cape, the following cost saving decision, as recorded in the 1869 report of the Lighthouse Board to Congress, was made.

Having every reason to believe that much money could be saved, if brick could be made at the cape instead of bringing them from San Francisco, at an enormous expense for transportation, an agreement was made with a person who lived in the vicinity, to furnish two hundred thousand brick, at the light-house site, for $25 per thousand, about a third the cost for transportation alone from San Francisco. About eighty thousand of these brick, made last fall, were of fair quality, and were accepted and paid for. The second kiln burned this spring were not of good enough quality, and were rejected.

The remainder of the supplies required to construct the lighthouse had to be landed at the cape through the surf. The first delivery arrived in May 1870, and when the vessel was partially unloaded, a gale struck, driving the ship onto the beach and causing the loss of the remainder of the cargo. To provide a foundation for the lighthouse, the earth was excavated to a depth of five feet, and a four-foot-thick bed of concrete was poured. The circular, brick tower rose to a height of fifty feet, and an oil room was attached to its base. A two-story, brick duplex, with seven rooms on each side, was built 125 feet south of the tower. The principal keeper was assigned one side, while the two assistants shared the other.

Since the lighthouse was far from any harbor, its primary function was to warn ships away from the reefs, which extended from the cape, and to provide a position fix for navigators. The fixed white light from the towers first-order, Henry-Lepaute Fresnel lens was first exhibited on December 20, 1870 and served this function well. With a focal plane of 250 feet, the light could be see from up to twenty-three miles at sea.

The stations first principal keeper was Harvey B. Burnap, who was serving at Oregons first lighthouse at Umpqua River when it collapsed in 1863. Burnap had been living in Port Orford, nine miles south of Cape Blanco, when he received his new assignment.

The town of Port Orford was established two decades before construction of the lighthouse. Louis Knapp, proprietor of the towns Knapp Hotel, was so concerned about the safety of the mariners navigating this dangerous section of the Oregon coast, that he kept a lantern burning nightly in the hotels large window that overlooked the sea. Burnaps light burning brightly just up the coast made Knapps lamp unnecessary.

Due to its exposed location, Cape Blanco was often buffeted by strong winds. The roof of the keepers dwelling was seriously damaged by a gale in February 1878, and during another storm on October 14th of that year, a large portion of the roof was torn off and the walls of the gable damaged. The roof was repaired the following year, and solid shutters were installed on the exposed sides of the dwelling to prevent the windows from being broken during sand and gravel squalls.

Supplies had to be landed on the beach south of the station until a 7,000-foot roadway was built in 1885 to link up with the county road leading to Port Orford, the nearest landing. In 1888, mineral-oil lamps replaced the lard-oil lamps used inside the lens, and in 1890 a detached brick oil house was built to store the more volatile fuel.

James Langlois and James Hughes were both stationed at Cape Blanco Lighthouse for their entire career, which lasted forty-two years for Langlois and thirty-seven years for Hughes. Hopefully they got along well, as they spent most of those years at the lighthouse together. Hughes was the second son of Patrick and Jane Hughes, whose 2,000-acre ranch bordered the lightstation property. The ranch is now Cape Blanco State Park, and the Hughes home, a two-story Victorian built in 1898 and listed on the National Register of Historic Places, remains standing and is open to the public for tours.

By the late 1890s, Keeper Hughes had two children and Langlois five. Fortunately, the second assistant keeper, who lived with the families in the stations duplex, was single, but still the residence was becoming crowded. The inspector recommended the construction of an additional dwelling at the cape starting in 1897, but it took over ten years of requests before a one-and-a-half-story, frame dwelling was completed in 1910.

Mabel Bretherton, one of the few female lighthouse keepers in Oregon, was appointed second assistant keeper at Cape Blanco in 1903. Mabel had been married to Bernard J. Bretherton, who served as an assistant keeper at Yaquina Head Lighthouse and then at Coquille River Lighthouse until his death in February 1903 of tuberculosis. The Lighthouse Service often offered employment to the widows of keepers to help them support their families, and such was likely the case with Mabel, as in 1903 she had three children under ten.

On the afternoon of October 19, 1903, the steamer South Portland, bound for San Francisco from Portland with fourteen passengers, twenty-five crew members, and a cargo of wheat, struck a reef of Cape Blanco in heavy seas and dense fog. Seeing that there was no hope to save the vessel, Captain McIntyre ordered the lifeboats lowered and made sure he was on the first one to leave. One of the lifeboats capsized soon after clearing the ship and was seen floating away in the fog without a soul aboard. The captains lifeboat also capsized in the turbulent waters, but seven of its twelve occupants were able to clamber back aboard. Equipped with only one oar and a piece of mast, it took the captain over twelve hours to reach shore.

Eighteen souls perished from drowning or exposure in the disaster, and Captain McIntyre was subsequently found criminally negligent for leaving the ship so soon. The South Portland stayed afloat for thirty minutes after McIntyre deserted it, and during this time, Charles Bruce, the first officer, desperately tried to beach the stricken vessel.

Keeper Langlois recorded the loss of the South Portland in the stations logbook: 21 persons lost with the wreck, ship sinking in about three quarters of an hour after striking. Ship a total lossKeeper patrolled the beach north and south of the station but found nothing of the wreck or any of the drowned crew or passengers.

Mabel Bretherton later found an officers coat from the wreck about a mile north of the lighthouse, and Oscar Langlois, son of the head keeper, recovered an oar and stool. Mabel was transferred to North Head Lighthouse in 1905, but she left there in 1907, and by 1910 was working in Portland as the superintendent of a Womens Exchange.

Around 1912, a hood was placed around the lamp inside the Fresnel lens, and a clockwork mechanism was used to raise and lower the hood to produce the following flashing signature: two-second eclipse, light for three seconds, two-second eclipse, light for thirteen seconds. In 1936, the original lens was replaced by a second-order revolving lens with eight bulls-eyes. The new lens, rotated by an electric motor powered by a generator, produced a white flash every twenty seconds. The motor and lens are still operating in the tower today.

A radiobeacon was placed in commission on the cape on November 30, 1925 to help mariners determine their location during periods of limited visibility. The beacon would transmit groups of three dashes followed by a dot. During the winter of 1932, severe storms swept the Pacific Northwest. Winds reached a velocity of 100 mph at Cape Blanco, ripping asbestos slates from roofs, blowing fences down, and driving pebbles like bullets through the lanterns plate glass.

The station was automated and de-staffed in 1980. Twelve years later, two local teenagers broke into the lighthouse and, using a sledgehammer, smashed one of the lens bulls-eyes and six smaller prisms. The boys were eventually apprehended and convicted. After a nation-wide search, Larry Hardin, of Hardin Optical Company in nearby Bandon, was selected to repair the lens. By the spring of 1994, the lens had been restored using Corning Pyrex, at a cost of $80,000.

After the road to the station was completed, visitors occasionally came to see the lighthouse. Between 1896 and 1916, more than 4,000 visitors signed the guest book. After years of being off-limits, Cape Blanco Lighthouse was once again opened to visitors on April 1, 1996.

Full-time RVers often serve as docents at the lighthouse and in exchange receive a free campsite and hook-up at Cape Blanco State Park. In 1995, two such people, who also happened to be artists, painted an eight by twenty-foot mural inside the greeting center near the lighthouse. The mural depicts Oregons coast with all nine remaining lighthouses.

In September 2002, the Fresnel lens was removed from the tower for restoration work as the caulking, which cemented the thousands of prisms to the brass frame, was starting to deteriorate. Hardin Optical of Bandon was again tasked to work on the lens, and succeeded in disassembling and recaulking the lens. The lighthouse itself underwent restorative work in the Spring of 2003, when the towers copper roof and lantern room windows were replaced, and the brickwork was repaired and painted. Shortly after Memorial Day of 2003, the reunited tower and lens were once again open to visitors.

Cape Blancos two keepers dwellings, oil house, water tower, and other utility buildings are all long gone, but the majestic tower, the centerpiece of the station, remains, and visitors are allowed to ascend the spiral staircase to the lantern room for an impressive view of the repaired lens and surrounding coastline.

The southernmost of the Oregon lights, Cape Blanco Lighthouse is located roughly 65 miles from the California border, or a couple miles north of Port Orford.
Latitude: 42.83704, Longitude: -124.56365

For a larger map of Cape Blanco Lighthouse, click the lighthouse in the above map.

From Highway 101, 4.5 miles north of Port Orford or 8.5 miles south of Langlois, turn west on Cape Blanco Road and follow it to its end at Cape Blanco Lighthouse. Cape Blanco Heritage Society opens the lighthouse for tours from 10 a.m. to 3:30 p.m., Wednesday through Monday starting on April 1 and running through October. The grounds near the lighthouse are only open during tour hours.

The lighthouse is owned by the Coast Guard and managed by the Bureau of Land Management. Grounds/tower open in season.