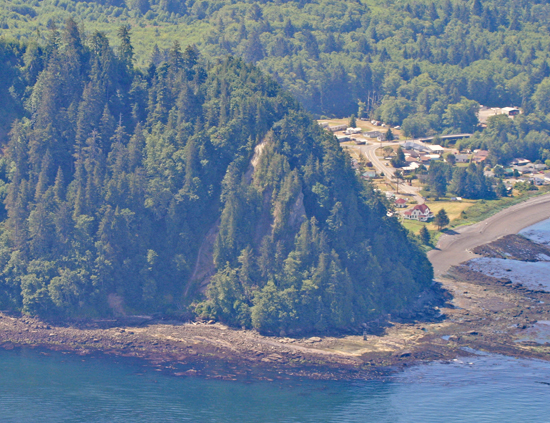 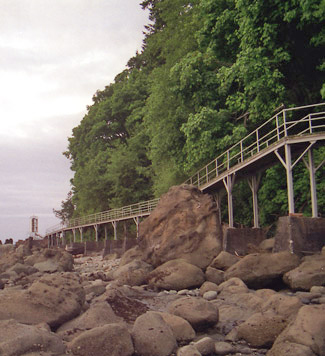 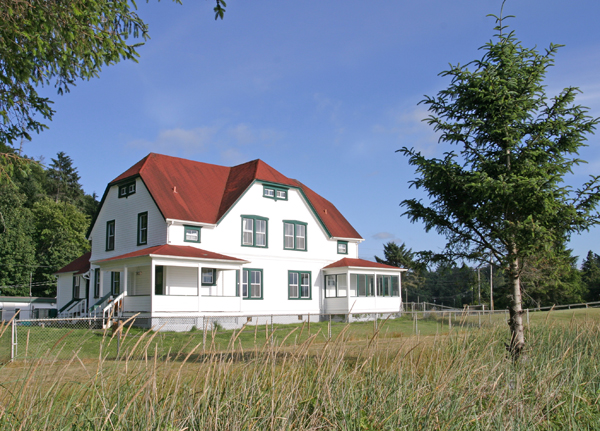 By 1865, three lighthouses had been constructed along the American side of the Strait of Juan de Fuca, however, a gap of over sixty miles still existed between the lights at Cape Flattery and Ediz Hook. Near the center of this gap lay Clallam Bay, with its small fishing villages. Slip Point forms the eastern side of Clallam Bay, and a small shelf located at its northern end was selected as the site for a fog signal and light. A light-colored streak, like a landslip, on the face of the point gave rise to the points name and had often been used as a landmark for mariners during daylight hours. Now, thanks to a $12,500 appropriation by Congress on June 6, 1900 for a light and fog signal, the point would also help mariners traverse this previously dark gap at night and during limited visibility. The amount asked for the selected site for the light was deemed so excessive the matter was transferred to a United States attorney for condemnation proceedings. The case was tried on June 5, 1902, and damages to the amount of $2,561.90 were awarded to the owners of the property.

Bids for constructing the station were opened on September 10, 1903, but, being in excess of the balance of the appropriation, were rejected, and a few weeks later the district engineer was authorizes to purchase material and perform the work using hired labor.

Construction of the station began in June 1904, and by the end of the following October, a fine keepers duplex and a single-story, frame fog signal building, with a Daboll trumpet protruding through its seaward wall, were completed. Lack of sufficient funds prevented the construction of a light tower, so instead, a lens-lantern mounted on a shelf on the northwest corner of the fog signal building served as the light. Hans Score, Slip Points first keeper, lit the lamp for the first time on April 1, 1905. The lens-lantern produced a fixed white light, while the fog signal sounded two-second blasts separated silent intervals of eighteen seconds, during thick or foggy weather.

Born in Norway in 1857, Hans Score went to sea at an early age, and by 1878, he had sailed aboard ships under seven different flags and visited four continents. After immigrating to the United States in 1879, Score spent eleven years in the U.S. Navy before beginning his lightkeeping career as third assistant keeper at Tillamook Rock in 1890. By 1893, he had worked his way up to head keeper of Tillamook Rock, and he then spent roughly five years as head keeper of both Point Wilson Lighthouse in Washington and Cape Arago Lighthouse in Oregon before being transferred to Slip Point.

While serving as keeper at Slip Point, Keeper Score rescued several people in need of assistance near the lighthouse. In 1914, he went to the aid of thirteen men whose gasoline launch Spirit had sunk about five miles from the station. Three years later, Keeper Score rescued the disabled motorboat Bunch from a dangerous position and towed it to safety.

As part of a $30,000 appropriation made on October 22, 1913 for improving existing aids to navigation in Puget Sound and adjacent waters, the intended light tower was finally added to the fog signal building in 1916, and a fourth-order clamshell Fresnel lens replaced the lens lantern. The upgraded beacon, whose characteristic was a white flash every five seconds, could now be seen from the Canadian side of the strait. A new fog-signal plant, consisting of a diaphone fog horn powered by twelve-horsepower internal-combustion engines, was also installed at the same time. The total cost for these upgrades was $9,204.58.

The keepers residence for Slip Point is located along the eastern side of Clallam Bay, so to service the light and fog signal, the keepers had to skirt around the side of the point by walking along an elevated, wooden catwalk. During violent storms, it must have been a harrowing experience to traverse the catwalk with the waves churning just below your feet.

Slip Point Lighthouse was replaced in 1951 by a beacon and fog signal on a keepers duplex has since been shared by the Clallam Bay County Sheriffs Department and Coast Guard personnel. In 2001, legislation was approved by the House of Representatives transferring 23.6 acres of Slip Point Lightstation to the local community for inclusion in Clallam Bay Spit County Park. Public officials of Clallam County have launched an effort to gather historic photos and blueprints of the original lighthouse that could be used in building an accurate replica. The modern beacon and the catwalk on top of the cement footings were removed around 2000, leaving just the keepers duplex standing as a reminder of Slip Point Lighthouse.

For a larger map of Slip Point Lighthouse, click the lighthouse in the above map.