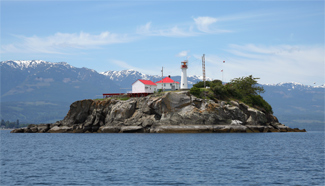 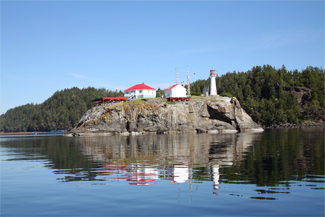 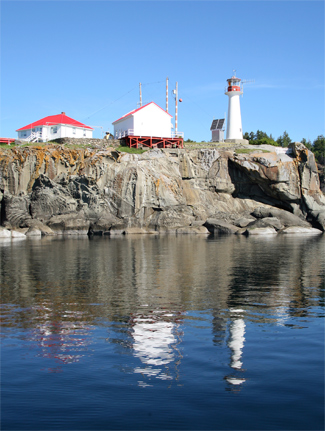 Nestled in the northwest corner of the Strait of Georgia, Chrome Island Lighthouse marks the southern entrance to Baynes Sound, bounded by Vancouver Island and Denman Island. The island was first labeled Yellow Rock on navigational maps around 1860, in honor of its unusual light-colored sandstone that glows golden in the setting sun. On that sandstone, pre-historic people carved curious shapes and figures, the widest variety of petroglyphs (including these puffins and this creature) to be found on the West Coast. Some scholars speculate that these drawings record battles of the Pentlatch people. Others hypothesize they hold some religious meaning, perhaps depicting offerings to the spirit Gods. Former keeper Barry Shaw put it this way, You just cant help but wonder: It may be graffiti. It may be the story of their lives. Many of the engravings were unceremoniously blasted away when construction of Chrome Island Lighthouse began in 1890.

Built to satisfy the petitions of coal suppliers in Union Bay, the lighthouse, a white dwelling attached to a square tower topped by a red lantern, was constructed under a $4,070 contract awarded to J. A. Brittancourt of Nanaimo. Bittancourt, however, failed to carry out the work according to specifications, and the Department of Marine was forced to step in and finish the project. Completed in 1890, the light was first lit on New Years Day, 1891, by keeper Tom H. Piercy. The tower measured fifty-five feet from its base to the vane on its lantern, and its signature of three white flashes could be seen for seventeen miles.

The Piercys raised ten children on the rock, an area less than two acres. One day, Henry Piercy, aged eight, discovered an intriguing piece of metal half hidden in the dirt. Like most boys, he decided the best method of figuring out what it was all about was to pound on it. The explosion of the blasting cap tore off his thumb and mangled the rest of his hand. Keeper Piercy, who was not allowed to leave the station without written permission, bound the boys hand and rowed him over to Denman Island, where the lad was set ashore and given directions to the doctors home, six miles away. After reaching Dr. Beadwell's home, Henry was transported by horse and buggy to Cumberland Hospital.

Tom Piercy stayed on at Chrome until 1898, when he was replaced by William McDonagh, who only served for a few years, but while there, witnessed one of the most unnerving shipwrecks to occur near Yellow Rock.

Laden with 630 tons of salted dog salmon and heading toward Union Bay for a load of coal before setting off for Japan, the Alpha carried Captain Yorke, thirty-one crew members, and its owner, Sam Barber, who planned to sell the ship for salvage at journeys end. Captain Yorke, not one to listen to subordinates advice, disregarded a Japanese lookout who twice cried out that they were headed straight toward a fixed light.

The Alpha struck Yellow Rock shortly after midnight on December 16, 1900.

Quartermaster Anderson swam to the island with a rope and secured it to a rock pinnacle, allowing twenty-five other crew members to make it to shore by shinnying over the line. Mr. Barber, the stubborn Captain Yorke, and five other crewmembers decided to wait it out aboard the ship by hanging on to the mainmast, despite the pleas of the landed crew to come ashore. The pounding seas eventually snapped the mast, and the seven clinging to it perished in the frigid water. Keeper McDonagh sheltered and fed the surviving crew until they could be transported back to Vancouver.

The light station has undergone a few changes over the years. In 1898, the lantern and illuminating apparatus atop the lighthouse were removed and sent to Egg Island. The upper portion of the tower was taken down, and the lower part roofed over, converting the lighthouse into just a dwelling. Two new range lights commenced operation on the island on July 16, 1898. The back light, located on the eastern extremity of the island, was a wooden, pyramidal tower surmounted by a wooden lantern and measured twenty-eight feet from base to vane. It exhibited a fixed white from a seventh-order dioptric lens elevated seventy-one feet above the high water mark. The front light, 290 feet west of the back light, stood twenty feet from base to vane and was similar in design to the back tower. When viewed in line the lights gave a bearing for the center of the channel, which ran seven fathoms deep.

In 1908, a diaphone foghorn, housed in a rectangular wooden building, replaced the hand-held horn previously used at the station.

By 1920, mariners, complaining that the fixed light could be mistaken for a farmhouse or a ship at anchor, asked for a new light on Chrome Island. Construction of a steel tower supporting a wooden cupola began in March 1922 amidst heavy winds and rains. When finished, the new towers revolving light produced a flash every six seconds in place of the former steady light.

A new dwelling was built in 1928, prompted by the keepers complaint that the former one was inhabitable. Wrote Allan Couldery, the foundation is infested with all kinds of beetles, wood mite, wood lice, etc. & these crawl in the hundreds every day but chiefly at night, all over the house. They drop into the food cooking on the stove, into our beds, our hair, on to our dining table . . . Both Mrs. Couldery & I are up nearly all night killing these pests to try & keep them down for we have not been used to such conditions & cannot endure them crawling over us in the dark.

And finally, in 1989, the skeletal tower was brought down and replaced with the current tower, a round fiberglass model topped with a lantern that exhibits a white light every five seconds. The light still ranges with a light on the opposite end of the island.

Yellow Rock was renamed Chrome Island around 1940 to lessen confusion with Yellow Island in Discovery Passage. In 2000, an archaeological study was carried out on the island, and as result it is now considered a protected archeological site featuring petroglyphs, human bones, and a shell midden.

Though the station has changed since McDonaghs time, the duty of the lightkeeper to succor those in distress has continued through the years. In 2009, a couple making their way to Hornby Island was caught off guard when winds rose and waves began swamping their boat. They were cold and exhausted when Keeper Roger Williamson spotted them near Chrome Island and hailed them in. Along with his wife Leslie, who serves as assistant keeper, Roger helped the couple dry off, fed them dinner, and kept them safely sheltered as they waited eight hours for the seas to calm. The Williamsons, and their German Shepherd India, work two shifts and file weather reports every three hours. The first report is issued at 3:40 a.m., and the final one at 10:40 p.m. Besides traditional lightkeeper responsibilities, the couple also collect scientific data for the Vancouver Aquarium, Ocean Sciences, and Environment Canada.

Now Chrome Island Light Station faces a storm of its own, as the Canadian Coast Guard has repeatedly threatened to de-staff it. Public outcry from mariners, floatplane operators, and those dependent on the vigilant work of the lightkeepers has so far kept this from occurring.

For a larger map of Chrome Island Lighthouse, click the lighthouse in the above map.

A good view of Chrome Island Lighthouse can be had from an overlook in Boyle Point Provincial Park on the southern end of Denman Island. To reach the island, take Denman Island Ferry from Buckley Bay, which is accessed by Exit 101 from Highway 19. Once on the island, follow Denman Road to the Hornby Island Ferry terminal then turn right and follow East Road to the park.

The lighthouse is owned by the Canadian Coast Guard and is staffed. Grounds open, tower closed.


The anchor from the shipwrecked Alpha was retrieved in 1973 and placed on a cement block near the Denman Ferry Landing.