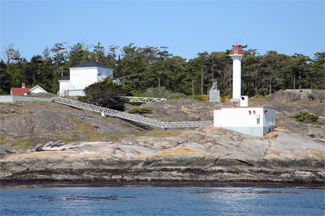 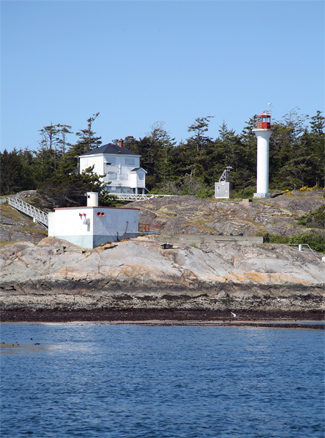 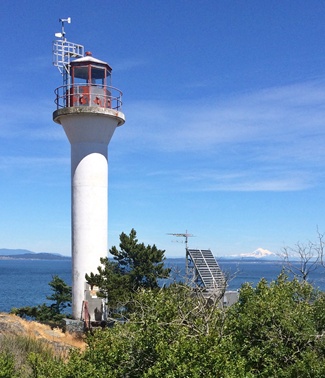 Situated two and a half miles off the southeast point of Vancouver Island, Discovery Island was named in 1846 by Captain Henry Kellet after the HMS Discovery, Captain George Vancouvers lead ship during his exploration of the west coast of North America in the early 1790s. Captain Kellet named the smaller island just to the north Chatham Island, for the HMS Chatham that accompanied the HMS Discovery during the Vancouver Expedition. An 1869 edition of the Coast Pilot noted that a lighthouse was needed on Discovery Island to mark the southwest side of the entrance to Haro Strait, an important shipping lane that follows the border between the United States and Canada and leads to the Inside Passage. On September 7, 1858, the paddle steamer Sea Bird, bound from Victoria to the Fraser River loaded with Gold Rush passengers, caught fire near Discovery Island, forcing its captain to deliberately ground her on the eastern point of Discovery Island. Though the steamer was eventually freed, its name has forever since been attached to the point.

In 1885, a $2,300 contract was awarded to Alex Mennie, of Port Moody, for the construction of a lighthouse on Sea Bird Point. The structure, built of wood, consisted of a square pyramidal tower surmounted by a metal lantern and attached to a one-and-a-half-storey keepers dwelling. The height of the tower measured forty-one feet from the ground to the weather vane atop the lantern room, from which a fifth-order light was shown at a focal plane of ninety-one feet.

George Brown was placed in temporary charge of the lighthouse on October 15, 1885, but the light was not exhibited for the first time until April 8th of the following year. Richard Brinn was appointed the first keeper of the lighthouse in 1886 at the age of fifty-three, and during the latter part of his time at the station, his daughter, Mary Ann Croft, helped with his responsibilities. Mary Ann had two daughters, Edith and May, for whom she was mostly responsible after her husband was hospitalized.

In 1889, tenders were invited for the construction of a steam-powered fog alarm on Discovery Island. The signal, which sounded eight-second blasts separated by a minute of silence, was put in operation on July 1, 1890, and Henry C. Watts was hired as an assistant to help with the extra work. The fog alarm building was situated roughly 300 feet southeast of the lighthouse, closer to the shore, where its horn was elevated forty-five feet above the water.

James Gaudin, the marine agent at Victoria, was a passenger aboard the SS Premier on October 30, 1892 as the vessel was making its way past Discovery Island around midnight. It was a foggy night, and much to the agents embarrassment, the stations fog signal was not sounding. The enraged agent wrote a scathing rebuke to Keeper Brinn, noting, It was only the careful navigation and good local knowledge of Captain Rudlin which [saved] many valuable lives and a fair steamer from destruction on the rocks near your station. Brinn was told to sound the horn whenever he couldnt make out the lime kiln on San Juan Island across Haro Strait, as that would be the means of exonerating him in the event of an accident.

On September 23, 1901, Keeper Brinn passed away, and two days later, Mary Ann Croft notified Ralph Smith, the Member of Parliament (MP) responsible for nominating a replacement keeper, that Discovery Island was like home for her, and that she was entirely dependent on the station for the support of her family. Agent Gaudin helped remove any reservations that Smith might have in appointing a woman, saying, If it is possible to continue the operation of the station by Mrs. Croft and her Assistant, I am certain it will continue to be worked in a satisfactory manner to the shipping of the Province. On April 9, 1902, Mary Ann Croft was appointed Canadas first female lightkeeper.

Though Mary Ann had been caring for the light and fog signal during the final years of her fathers life, she still had to prove to many that a woman could handle the physically taxing chores of stoking the steam fog signal, trimming wicks, cleaning the lens, and painting the stations structures all while caring for her two children. Agent Gaudin was evidently satisfied with her work, for in 1908 he reported that Mary Ann kept the station in a highly creditable and efficient condition.

In 1906, a Chance Brothers lighting apparatus, consisting of a fourth-order lens occulted by a screen operated by a clockwork mechanism, was installed in the lantern room atop the lighthouse in place of a sixth-order light. A new fog alarm building with a type F diaphone was added to the station in 1914.

After nearly nine years as keeper, Mary Ann wrote Ralph Smith in March of 1911 requesting her salary be raised from $960 to $1,200 to match that of the keeper at Trial Island. A gasoline fog alarm was scheduled to be installed at the station in a few months, and after that Discovery Island would have the same equipment as nearby Trial Island, so Mary Ann felt she deserved the same remuneration. Mary Anns logic was hard to refute, and she was soon receiving equal pay for equal work.

In 1919, Mary Ann turned fifty-four and wrote to her MP, S.F. Tolmine, requesting information on what kind of pension she could expect.

This is the case shortly put, as I do not believe in long and tedious stories. I think that after 23 years service in such employment as the Lighthouse Branch, a person is due for some rest and something to make that rest free from worry for whatever few years that may be left.

I could make an appeal a mile long about the desolate situation of the Lighthouse Keeper in bad and stormy weather, but you know the coast, and you know the circumstances as well as I can tell you, if indeed not a good deal better.

I hope you will be able to convince those warmly housed gentlemen at Ottawa that when 23 years are taken out of a womans life in a lighthouse, she is about due for a recognized and guaranteed rest.

The MPs reply bore bad news. Superannuation privileges for keepers had been withdrawn in 1882, so Mary Ann was forced to continue working. Finally, on August 31, 1932, after thirty years as keeper and a few more helping her father, sixty-seven-year-old Mary Ann Croft retired and rented a room in the Marine Chalet at Victoria, where she could keep a watchful eye on her beloved island home. By this time, pensions had been restored, and Mary Ann was granted a monthly stipend of forty-three dollars.

In the 1970s, the present matchstick-like tower was constructed on Discovery Island, replacing the islands second lighthouse, which consisted of lantern centered atop the hipped roof of a square, two-storey keepers dwelling. This dwelling, minus its lantern, continued to house keepers until the station was de-staffed in January 1997.

For a larger map of Discovery Island Lighthouse, click the lighthouse in the above map.

Discovery Island Lighthouse is best seen by boat, though the island is a Marine Park that is open to visitors. Ocean River Adventures offers kayaking and hiking tours of Discovery Island.

A lantern room formerly used on Discovery Island was restored and then unveiled at the official opening of the Canadian Coast Guard base in Victoria. It can be viewed on the grounds of the base on Huron Street near the entrance to the harbour.