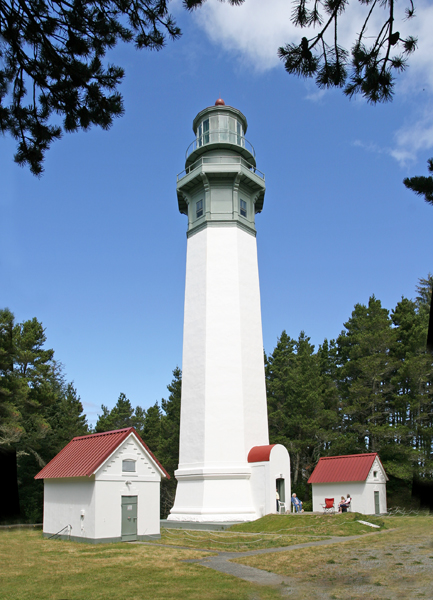 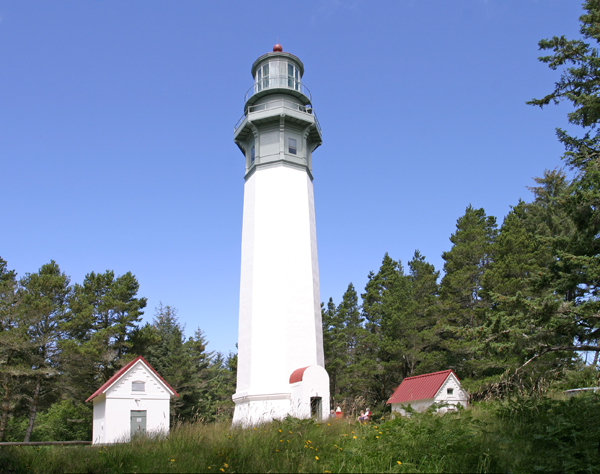 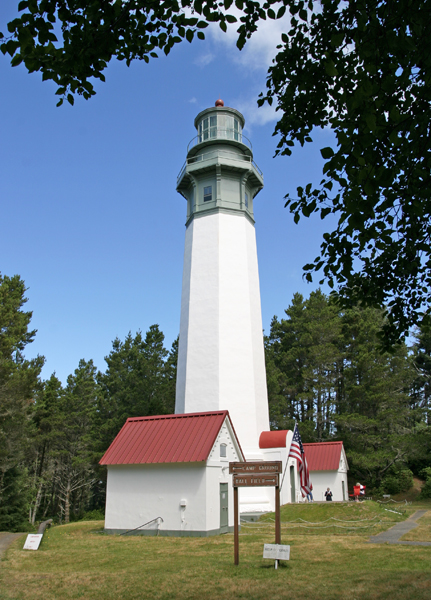 On June 30, 1898, people gathered from the towns of Hoquiam, Westport, Aberdeen and all the settlements in between for the dedication and lighting ceremony of Grays Harbor Lighthouse, established to mark Washingtons best Pacific Coast harbor. Fourteen years had elapsed since money was allocated for a lighthouse at Grays Harbor, so the residents were anxious to see the work completed. The potential for Grays Harbor to become a significant port was noted in 1841 by the U.S. Exploring Squadron:

Grays Harbor is the only [harbor]  of importance south of Cape Flattery, at the entrance of the Straits of Juan de Fuca, and above the mouth of the Columbia. This has a narrow opening, however, with dangerous breakers on either side, and though it immediately opens out, it is filled with mudflats, which confine the anchorage within narrow limits.

Grays Harbor is named after Captain Robert Gray, a Boston fur trader, who discovered it in May 1792. He actually christened it Bullfinch Harbor to honor the owner of one of his ships, but Lieutenant Joseph Whidbey, of Captain George Vancouvers British expedition, visited the harbor a few months later and identified it on his charts as Grays Harbor.

The Westport area had become a major logging port in the late nineteenth century. In 1890, there were thirteen sawmills at Grays Harbor that exported sixty million board feet of lumber, and the harbors shipyards built nine steamers and three sailing vessels that year.

Congress approved $15,500 on July 7, 1884 for establishing a light at Grays Harbor, and a five-acre tract on Point Brown, the northern side of the entrance to Grays Harbor, was selected for the lighthouse. While negotiations for a five-acre tract of land were underway, the Lighthouse Board realized that a small harbor light would be inadequate for meeting the needs of mariners along this part of the Pacific Coast. In a meeting held February 3, 1886, the Board ordered that steps be taken to have $60,000 added to the existing appropriation to enable the erection of a first-order light in the vicinity.

The Lighthouse Board repeated its request for an additional $60,000 each year, until Congress finally approved an act on March 3, 1893 that added $20,000 to the project and allowed a contract for the work to be made at a total cost not to exceed $75,000. Congress provided an additional $39,500 for the lighthouse on March 2, 1895, and efforts were made that year to obtain title to the desired parcel on Point Chehalis, at the southern side of the entrance to Grays Harbor. The property owners were unwilling to sell, and condemnation proceedings had to be initiated. The circuit court decreed that $500 would be a fair price, and this amount was paid by the government on December 16, 1895.

With title to the property secured, test borings were made at the proposed site for the tower, and plans were prepared for the stations buildings. Separate contracts were made for the metalwork and for the buildings, with a $7,443 contract being awarded to Patrick Dundon of San Francisco for providing the metalwork and a $30,000 contract being given to Charles J. Erickson of Seattle for erecting the light station buildings. Dundon was to deliver the metalwork by June 18, 1897, but it did not arrive until October 12, 1897, 116 days later. As a result, Erickson was awarded a ninety-day extension, but he was unable to finish the work until March 26, 1898, sixty-seven days after the new deadline.

Reverend J.R. Thompson laid the cornerstone of the lighthouse during a ceremony on August 23, 1897 and was one of several men to address the large crowd gathered for the occasion.

Architect Carl W. Leick considered Grays Harbor Lighthouse his masterpiece. Standing 107 feet tall, the octagonal tower is the tallest lighthouse in Washington, and the third tallest on the West Coast. The base of the lighthouse rests on a twelve-foot-thick foundation of sandstone. The lighthouse walls, which are four feet thick at the base, are made of brick with a coating of cement on the exterior. A series of 135 metal steps, bolted to the towers walls, lead to the lantern room. Windows originally provided light for the interior of the tower, but to cut down on maintenance, they were cemented over when the station was electrified. A third-order, bivalve lens was installed atop the tower on June 10, 1898, and it went into commission a few weeks later on June 30.

Besides the lighthouse, the station was also equipped with a windmill, a water tank, a well, two keepers dwellings, two oil houses, and a fog signal building. The fog signal apparatus, previously used elsewhere, was not received from the general lighthouse depot until August 23, 1898, and then it was found to be eaten with rust and in need of such extensive repairs that new equipment had to be ordered. The new sirens and engines were received on February 15, 1899, and the signal commenced operation on March 8, 1899. The fog signal was typically in operation for about 500 hours each year, or six percent of the time, but in 1905, it logged 881 hours and consumed about sixty-seven tons of coal.

To produce the necessary steam for the fog signal, the windmill pumped water to the building where a coal fire converted the water to steam. Roughly 200 pounds of coal were consumed to produce the steam needed for just one hour of fog. The smokestack of the fog signal building extended upward almost half as high as the lighthouse itself.

The light originally shone from a unique third-order clamshell Fresnel lens manufactured by Henry-Lepaute of Paris in 1895 and had a signature of alternating red and white flashes separated by five seconds. Red glass, placed on one side of the light source, cut the light transmission significantly. To overcome this reduction, the bulls-eye with the red glass was much larger than the bulls-eye that produced the white flash. With this compensation, both the white and red flashes could be seen up to sixteen miles at sea.

The Fresnel lens assembly originally floated in a trough of mercury. This setup provided near frictionless movement and allowed the lens to be rotated by a weight that hung inside the tower. When the station was electrified in 1931, a one-sixth horsepower motor was used to turn the giant lens, and a 300-watt lamp was installed as the light source.

The accommodations for the keepers consisted of a single dwelling for the headkeeper and a duplex for the assistants. These structures, which are no longer standing, were nearly identical to the dwellings built earlier in the decade for the lighthouses at Heceta Head and Umpqua River.

Christian Zauner, who had served for nine years as the first keeper of Destruction Island Lighthouse, was transferred to Grays Harbor in 1898 to serve as its first keeper. Accompanying Keeper Zauner to his new station were Hermine, his wife, and two daughters. Zauner spent twenty-seven years at the station, retiring at the end of July 1925. No other keeper served longer at Grays Harbor.

Keeper Zauner reported feeling shocks from the earthquake that devastated San Francisco on April 18, 1906. Shortly after 5 a.m. that morning, Zauner said the large weight, suspended in the tower to rotate the lens, started swinging from east to west like a pendulum, and the cotton rope used to hoist up oil containers was set in violent motion.

In 1926, a new concrete fog signal building was built about a half mile seaward from the original one. A type F diaphone, actuated by air compressed to thirty pounds by fifteen-horsepower Mietz Charter gas engines and compressors, was installed in the new building. Cooling water was obtained from a well and stored in a cistern. Today, an automatic fog signal is located at the end of the south jetty in Westhaven State Park. To further aid mariners, a radiobeacon went into service at the station on November 2, 1926.

During the 1990s, health concerns arose over the mercury-filled drum, and the tower, called the Westport Lighthouse by locals, was closed to the public. In 1998, one hundred years after the lighthouses dedication ceremony, the Westport-South Beach Historical Society negotiated a lease agreement with the Coast Guard and began cleaning up the tower. In 2001, the building was deemed safe, and public tours resumed. The Westport-South Beach Historical Society was granted ownership of Grays Harbor Lighthouse in 2004 under the National Historic Lighthouse Preservation Act, and it soon enacted a five-year plan to restore the lighthouse and its third-order Fresnel lens.

For a larger map of Grays Harbor (Westport) Lighthouse, click the lighthouse in the above map.

From Highway 101 near Aberdeen, take Highway 105 west for roughly 20 miles. Where Highway 105 tees, turn right and go north for two miles on Highway 105, also known as Forest Avenue, to Ocean Avenue and turn left. The lighthouse is located 0.2 miles down Ocean Avenue on the right hand side.


Twelve miles south of the Grays Harbor Lighthouse, the Willapa Bay Lighthouse once marked the northern side of Willapa Bay. Built in 1858, the lighthouse operated for over 80 years until it was undercut by the sea and tumbled into the bay in December of 1940. Several replacement towers have served to mark the bay, each one being placed ever farther north and east of the original lighthouse. Much of the city of North Cove has also tumbled into the sea, and today blacktop roads abruptly end atop sandy bluffs that slope down to the water. I do not believe there is an official light in the area any longer. The last tower, which stood three-fourths of a mile from the site of the original lighthouse, apparently succumbed to erosion in the 1990s. There is still some connection to the original lighthouse that can be visited. Just east of Highway 105 near North Cove is a cemetery that was relocated three-fourths of a mile inland in 1977 to save it from the encroaching water. In the cemetery, you can find the grave of John Telbin, a keeper of the Willapa Bay Lighthouse.