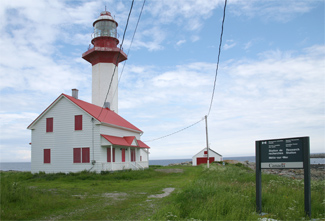 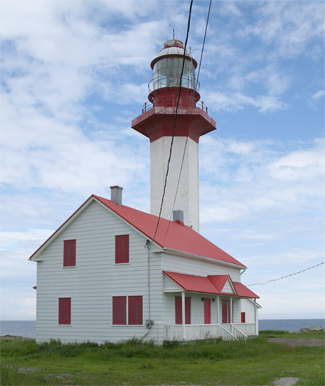 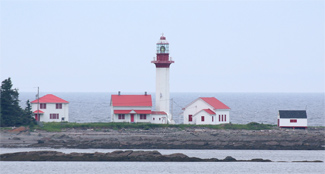 John Page, Chief Engineer of Public Works for Canada, visited Metis in 1860 to select a site for a lighthouse, and after examining several places, including Pointe Metis and various offshore rocks and ledges, reported:

A place was ultimately selected on the highest and most seaward part of the point, lying between Little Metis and Grand Metis Bay, and possessing the advantage of being 60 feet over the level of the sea, and although not so far to the northwards as the reefs lying outside of the Bay, it would, in addition to its superior height, be in a position that cannot be obscured, in any direction serviceable to vessels. A light 50 feet in height at this place, would command a greater range than one 100 feet high would do, on the reef to the eastward. The point is of a granite character, and wooded on top; sand can be obtained in either of the Bays to the eastward or westward of it.

A lighthouse was eventually built on Pointe Metis, but it would not be until after confederation, more than a decade after Page selected the site. Construction of Pointe Metis Lighthouse at the extremity of a long headland that juts out into the St. Lawrence River began in 1873 under the direction of R. Cameron of Lancaster, Ontario. The land on which the lighthouse stands was later purchased from J. H. Ferguson, Esq., of Metis, in April 1876 for $100.

The original wooden Point Metis Lighthouse consisted of a white keepers dwelling attached to a square, forty-foot-tall tower, painted bright red and capped by an iron lantern room. The total cost came to $3,518.84, of which $1,425 was for the lighting apparatus and accessories. The revolving catoptric light was first lit by J. Jules Martin on October 20, 1874 and produced a white flash each minute that could be seen for thirteen miles. Two lamps, one No.1 circular-wick lamp and one mammoth flat-wick, were paired with twenty-one-inch reflectors in the lighting apparatus, which completed a revolution every two minutes. Prior to the 1877 season, a piece of ruby glass was placed in front of one of the two lamps, changing the lights characteristic to alternating red and white flashes each minute.

In 1876, the lighthouse inspector noted Keeper Martins complaints of the keepers dwelling being very cold and too small. The Marine Department ordered that an additional kitchen, twenty by eighteen feet, be built to remedy this situation, and it seems this work was carried out by Keeper Martin himself, as he received $450 in 1877 for enlarging the house.

J. Jules Martin passed away in November, 1879, whereupon his widow was granted the customary gratuity of two months' salary, amounting to $50. At twenty-three years of age, Jules Gabriel Martin, the oldest son in the family, took over the position his father had held.

William P. Anderson, Chief Engineer of the Marine Department, visited the lighthouses between Quebec and the Strait of Belle Isle in 1901 to ascertain what improvements could be made. Pointe Metis was inspected with a view to locate a fog alarm there, but the surroundings were judged so unfavourably by Anderson that he discouraged the project. Anderson also determined that it would be difficult to improve the light at Pointe Metis without building a new lighthouse to contain it.

The Steel Concrete Company of Montreal commenced construction of new, cylindrical reinforced-concrete towers at Pointe Metis, Matane, and Cap de la Madeleine in 1906. Completed in 1908 at a cost of $3,000, the tower at Pointe Metis stands eighty-two feet tall (24.9 metres), from base to vane, with a focal plane of sixty-nine feet (21 metres). A third-order Fresnel lens, manufactured in Birmingham, England, by Chance Brothers, was installed in the lantern room and revolved once every fifteen seconds on a bed of mercury to produce a group of three flashes every seven-and-a-half seconds in this manner: quarter-second flash, one-second eclipse, quarter-second flash, one-second eclipse, quarter-second flash, four-and-three-quarter-second eclipse. The original illuminant used in the new tower was petroleum vapour burned under an incandescent mantle. A new dwelling, connected to the tower by a covered passage, was added to the station in 1911, along with an outbuilding and cistern.

In 1923-1924, the cylindrical tower was reinforced, giving it its present hexagonal shape. An assistant keepers house was added to the station in 1957.

There were hopes that Metis would become a major port, but instead Metis Beach and Metis-sur-Mer became a popular country retreat for the wealthy bourgeois English with first-class hotels, summer homes, tennis courts, golf courses and chartered salmon fishing trips.

In 1954, Georges Fafard, who had been keeper for twenty-six years at Pointe des Monts Lighthouse was appointed keeper at Pointe Metis. Keeper Fafard died suddenly in January 1958. Emile Chouinard became keeper in his stead, but he passed away in December. Chouinard's son, who had been working as an assistant, took charge of the station until Evariste Ferguson was made keeper the following spring.

Marcelle Ouellet became keeper in 1970, succeeding Keeper Ferguson, and on April 1, of the following year, the diaphone fog signal broke down. The signal was never replaced, and in 1972, the station was de-staffed, ending the era of the lightkeeping at Pointe Metis. The towers third-order Fresnel lens is now privately maintained year-round by the Municipality of Métis-sur-Mer. A half-horsepower motor is used to revolve the lens, though the original clockwork mechanism, powered by weights that had to be wound up every four hours, is still in place.

The lighthouse is listed on modern Coast Guard lists as Pointe Mitis, though historically it appeared as Metis Point or Little Metis Point.

For a larger map of Pointe Mitis Lighthouse, click the lighthouse in the above map.

As Pointe Mitis Lighthouse is located at the end of a private road, Route Lighthouse, it is best seen from a distance in Métis-sur-Mer. From Route 132, east of the lighthouse, take Rue Beach and drive along the shore through Métis-sur-Mer where you will find a few vantage points from where you can view the lighthouse. The two keeper's dwellings at the station have been used by the Canadian Forest Service as a research station.

The lighthouse is owned by the government of Canada and managed by Fisheries and Oceans Canada and Natural Resources Canada. Grounds/tower closed.