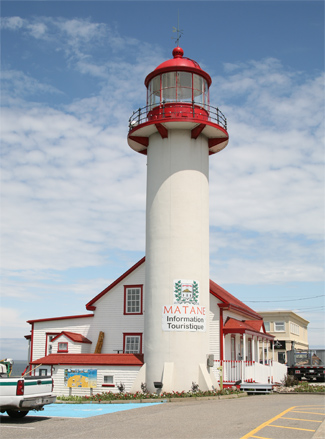 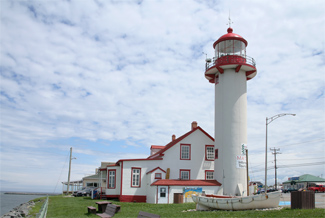 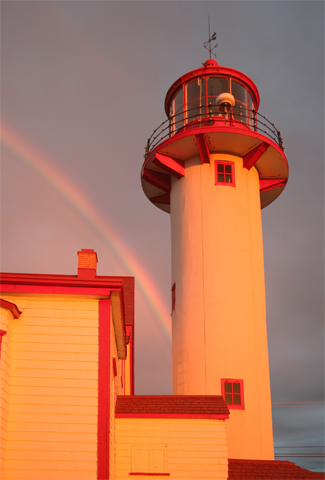 Known for its salmon and shrimp, the little town of Matane grew up around the lighthouse, located just west of the mouth of the Matane River. Instead of guiding ships to Matane, the inactive lighthouse now welcomes visitors to the area, serving as a tourist information centre and housing a small museum. At Matane, the St. Lawrence River is thirty-three miles wide and often foggy during certain periods of the year. The first lighthouse was built in 1873 on a cliff roughly one mile west of the Matane River to help light the coast between the existing lighthouses at Poine-au-Père and Cap Chat. Consisting of a wooden keepers dwelling attached to a tower, which measured eighteen feet square (5.5 metres) at the base and tapered to twelve feet square (3.6 metres) at its lantern room, the lighthouse was painted white and exhibited a fixed red light that could be seen for ten miles. Two circular-burner lamps, with 20-inch reflectors, and two mammoth flat-wick lamps, with eighteen-inch reflectors, were used to produce the light, which had a focal plane of sixty-five feet, though the tower was just twenty-eight feet tall.

François Dionne was appointed first keeper of the light on September 19, 1873, at an annual salary of $200, and he put the light in operation a few days later on October 1. The total cost of the lighthouse was $2,860.56, which included payments to S. Cimon for building the lighthouse and to E. Chanteloup for supplying the lantern and lighting apparatus. The land for the lighthouse was acquired from T. Fraser of Matane for $100 in 1874.

In 1877, the light was changed from fixed red to fixed white, and that same year the inspector reported that the keeper complained about having to rent a house in Matane during the winter was the lighthouse was too cold. The inspector recommended that the tower be well puttied and that an addition, measuring about thirty feet long by twelve feet wide, be built. This addition to the dwelling was made in 1882.

When built, the lighthouse was twenty-eight feet from an embankment, but due to erosion of this cliff by the river, the structure had to be moved 100 feet (30 metres) inland in 1894. The lights second keeper, Octave Desjardins, served until 1897, but then two years later he removed the buildings he had built at his own expense from the station, forcing the new keeper, Joseph Banville, to build his own stable and barn.

In 1881, a black cross daymark was painted on the tower's seaward side to serve as a daymark. Over time, the wooden tower deteriorated, and in 1906 a new reinforced concrete cylindrical tower, a sister to those built at the same time at Cap-de-Madeleine and Pointe-de-Mitis, was constructed just west of the old lighthouse by the Steel Concrete Company of Montreal for $3,600.

This tower, painted red and with a red lantern, measured sixty-seven feet from its base to the vane on its lantern, and was placed in operation on November 10, 1907 employing a third-order Fresnel lens formerly used at Cape Norman, Newfoundland. This lens, constructed by Barbier, Benard & Turenne of Paris, France, was composed of four groups of two flash panels each and revolved once every thirty seconds, producing two white flashes every seven-and-a-half seconds. The light thus had a characteristic of half-second flash, one-second eclipse, half-second flash, five-and-a-half-second eclipse and could be seen for fifteen miles ( 24 kilometres). The adjoining one-and-a-half story keepers dwelling was constructed in 1909 by A. Vezina for $4,750.21. Sometime between 1908 and 1917, the tower was painted white.

The light was deactivated in 1951, and the lighthouse sold to the Historical Society of Matane for one dollar. Ten years later, the municipality of Matane assumed ownership.

Camille McKinnon, the last keeper, who served from 1935-1951, helped rescue the crew and passengers of a Quebec Airways plane when it crashed onto the rivers ice packs northwest of Les Mechins in 1946.

For a larger map of Matane Lighthouse, click the lighthouse in the above map.