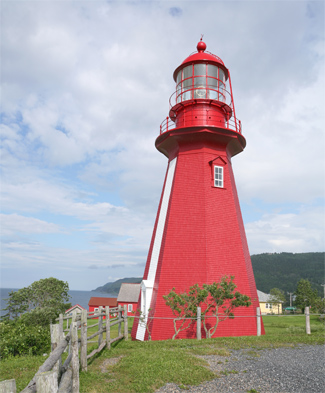 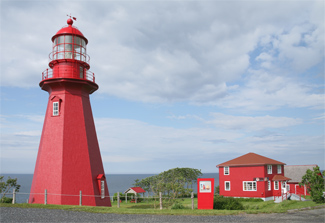 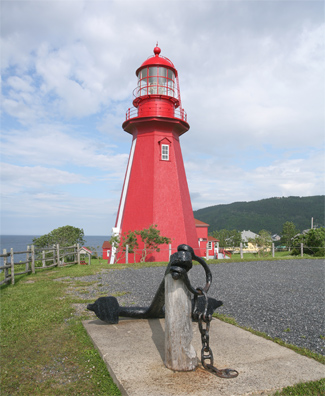 Named after nearby Marten River, La Martre Lighthouse is considered by some to be the crown jewel of the Gaspé lighthouses. Though fully automated, La Martre is the only light in Quebec that operates in a non-automated manner during the day, so that tourists can see the Fresnel lens rotating in its mercury bath using the original system of weights and cables. The first La Martre Lighthouse, a square, tapered, sixty-four-foot-tall wooden tower with an attached keeper's dwelling, was built in the tiny village of La Marte overlooking the Gulf of St. Lawrence in 1876. The total cost for the lighthouse came to $7,347.04. Nine circular wick lamps set in twenty-one-inch reflectors were originally used in the iron lantern room to produce a fixed white light, but the number was reduced from nine in five in 1877. Two black horizontal bands were painted on the white tower in 1881 to help mariners identify the lighthouse during the day.

Jean-Baptiste Gauthier, the first keeper, raised a family of eight children, two of whom followed in their father's footsteps and joined the lighthouse service. Keeper Gauthier retired in 1902 and received the Imperial Service Order medal the following year for his lengthy service.

In 1890, the site was the scene of the sinking of the Feedjoff, a Norwegian ship, and one of the ship's anchors can be seen near the station today.

Along with the lighthouse, a fog alarm building was built with an extension for air tanks and a diaphone. To supply the necessary water for the steam engine, a well with a diameter of ten feet was sunk and lined with concrete. A concrete cistern was dug beneath the boiler room to store the water, and a sixty-foot-tall brick chimney was put up to carry away the smoke from the engines. The fog alarm building was also painted red, and the diaphone fog signal commenced operation on August 10, 1906, sounding a five-second blast in each minute when needed. Duplicate ten-horse-power oil engines replaced the steam engine in 1919.

Leclercs career was short lived, beginning a long history of politically motivated keeper appointments. In 1912, Jean-Baptiste Gauthiers son, Louis-Phillipe Gauthier was elected as the Member of Parliament (MP) for Gaspé. His influence led to the ouster of Leclerc and the appointment of the third keeper, Joseph LItalien, who was married to Louis-Phillipes sister, Elliane. Joseph was thirty-three at the time and kept the light burning for thirty-four years, while Elliane worked the telegraph. The couple raised twelve children at the station, and their son Raymond, assisted at the light from 1929 to 1946 and served as keeper for a year after his father retired.

A Liberal MP replaced Raymond LItalien in 1947 with Paul Roger Caron, the son of Jean-Baptiste Caron, the lightkeeper at Cap-de-la-Madeleine. Paul Caron was a young veteran of World War II and had learned telegraphy, radio, Morse code and mathematics in the service. He was well-liked in the community, and when La Martre was automated in 1972, he was transferred to Cap-des-Rosiers, where he served for another six years.

In 1957, Arthur Lafontaine and Ovide Fortin were hired to construct a new dwelling and demolish the existing one.

After the lighthouse was automated, another keeper emerged, one who got his job based on his passion for the lighthouse. Fearing the lighthouse would deteriorate, Yves Foucrault petitioned for funds and was able to hire a few students each summer to help develop a museum and assist with maintenance of the station.

His dedication was noted in 2008 by Barry MacDonald, President of the Nova Scotia Lighthouse Preservation Society, while speaking in Parliament to the Standing Committee on Fisheries and Oceans in favor of Bill S-215, an act to protect heritage lighthouses.

When you go to his lighthouse, you almost feel you should take off your shoes when you go inside, really. This is how well he takes care of this lighthouse.

This lighthouse has not been divested, but Monsieur Foucreault has taken it upon himself  He makes the care of this building his personal responsibility. If Mr. Foucreault were here today, I'm sure he could tell you he goes quite regularly, yearly, to DFO and says he needs paint and paintbrushes, just simple things to keep up that light. He does the yearly maintenance that was done by a keeper when a lightkeeper was on staff.

The cost to DFO when and if that lighthouse is passed over under the divestiture program will be zero. We've got Mr. Foucreault to thank for that. It's too bad we didn't have an Yves Foucreault at a lot of lighthouses in this country.

Because of Foucreaults work, the lighthouse continues to be one of the highlights of the Gaspé lighthouse trail. The keepers house now serves as town hall/welcome centre, and a museum in the fog alarm building has exhibits on lighthouse history and equipment.

For a larger map of La Martre Lighthouse, click the lighthouse in the above map.

From Route 132 on the northern shore of the Gaspé Peninsula, turn onto Avenue du Phare in La Martre and drive a short distance up the steep hill to reach La Martre de Gaspé Lighthouse. The keeper's dwelling has a gift shop, and a barn-like structure serves as a museum. The tower and museum are open from June through early September between 9 a.m. and 5 p.m. For more information, call (418) 288-5698 .

The lighthouse is owned by the Canadian Coast Guard. Grounds open, tower open in season.


Lighthouse enthusiasts can have a unique and memorable experience at La Martre Lighthouse. When I visited, I was given the opportunity to crank up the weights that revolve the Fresnel lens. There are not too many lighthouses where you can do that and where the Fresnel lens is still revolved by a clockwork mechansim energized by suspended weights.