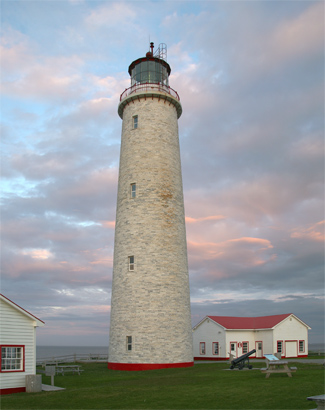 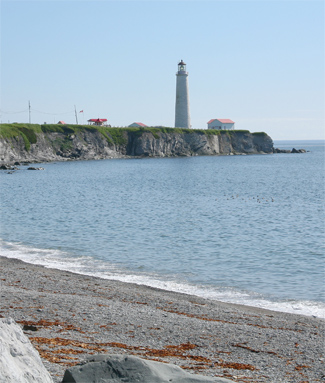 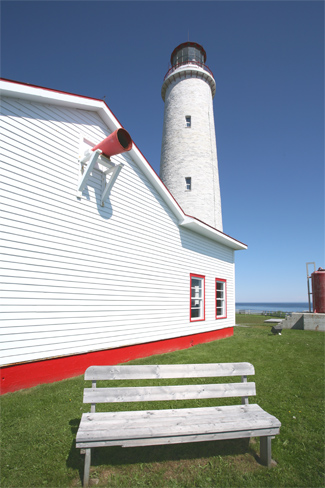 Cap des Rosiers, situated near the tip of the Gaspé Peninsula, marks the turning point from the Gulf of St. Lawrence into the St. Lawrence River. Named by Samuel Champlain for the abundance of wild roses in the area, the strategic spot has been a witness to much history. It was here in 1759 that an officer spotted the British fleet of General James Wolfe and relayed the news to Quebec. Even with the warning, on September 13, 1759, General Wolfe and his troops defeated General Montcalm on the Plains of Abraham near Quebec City, wresting the colony from France. Both Generals died in the battle, and New France eventually became the Province of Canada.

Cap des Rosiers has witnessed more shipwrecks than any other location in the Gaspésie. From May 1840 to September 1848, there were eight major wrecks in the vicinity. On April 28, 1847, The Carricks,carrying impoverished Irish families to America, foundered just off the cape. Of the 187 passengers on board, eighty-seven perished, and the residents of Cap des Rosiers village succored the 100 survivors. In 1966, the ships bell was found in Blanc Sablon, near the Newfoundland border, and brought to the Cap des Rosiers parish church, where it now stands next to a monument honoring the victims of the shipwreck.

The need for a light marking the cape was apparent, and a contract for its construction was granted in October 1853 to Charles François-Xavier Baby, the proprietor of a tug line below Quebec City. Besides the lighthouse at Cap des Rosiers, Baby was simultaneously overseeing the erection of lighthouses at West Point on Anticosti Island, and at Point Amour and on Belle Isle in Newfoundland. According to the contract, the tower and dwelling were to be completed by September 1, 1854, but as it was impossible to find suitable stone in the immediate vicinity, the project was delayed. In fact, by the end of 1854 only the foundations had been dug to solid rock and some work on the foundation walls commenced.

Using stone obtained from Gaspé Basin, the tower walls had been carried up twenty feet above the basement by the end of 1855, and work on the dwelling for the keepers was nearly complete. The plans called for the tower to be ninety-five feet in height above the ground, with an outside diameter of twenty-five-and-a-half feet at the base and seventeen feet at the top. The walls were to be seven-feet-three-inches thick at the base and three-feet thick at the top. Including the basement and lantern room, the tower was to have nine stories, with each of the seven intermediate stories having a window placed alternately on opposite sides of the tower.

By the end of 1856, the keepers duplex, which measured fifty feet by twenty-four feet and was connected to the tower by a covered passage, was finished, as was the masonry work on the tower. The lantern and lens for Cap des Rosiers were obtained from the Parisian firm of L. Sautter, and mechanics from the manufacturer came to the cape in 1857 to oversee the fitting of them atop the tower. With the lantern in place, the tower's total height reached 112 feet, making it the tallest lighthouse ever built in Canada. The lighthouse is sometimes referred to as an Imperial Tower, as it was constructed with British assistance while the Province of Canada was still a colony. The total cost of the lighthouse was nearly $115,000.

Cap des Rosiers first-order Fresnel lens, exhibiting a fixed white light, was placed in operation on March 15, 1858. Standing on low black shale cliffs, the tower has a focal plane of 136 feet (41 metres), and its light a range of 16 miles (26 kilometres). Whale and porpoise oil were replaced by kerosene as an illuminant in 1869, and in 1903, the light was converted to petroleum vapour, burned under incandescent mantles. The characteristic of the light was also changed in 1903 from fixed white to an occulting white light of fifteen seconds on and five seconds off, through the installation of an occulting screen provided by Chance Brothers. The light was electrified in 1950.

A nine-pounder gun and necessary ammunition was delivered to the station in 1857, and the keepers were required to fire it every hour during fog and snowstorms. The fog gun consumed about 1,500 pounds of powder each season. The gun was kept in a gun house, and a brick magazine with a zinc roof was used to store the powder. Starting in 1881, the fog gun was fired every thirty minutes, when needed, instead of hourly.

To save the expense of cutting stone and transporting it to the site, the exterior of the tower at Cap des Rosiers was faced with two tiers of white fired brick, which it was thought would prevent moisture from percolating into the interior stonework. This, however, was not the case, and by 1870 the tower had been clapboarded. The tower was reclad with white brick in 1954 and with white marble, believed to be from Massachusetts, in 1984.

The original keepers dwelling was demolished in 1956, and two new dwellings for the keeper and assistant were built along with buildings for the foghorn and radio beacon.

During World Ward II, German U-Boats lurked off the cape. One submarine was seen from the lighthouse on September 15, 1942 at 11:00 a.m. Just like his predecessor, two hundred years before, Keeper Joseph Ferguson, immediately dispatched word of the danger to the authorities.

Cap des Rosiers Lighthouse was declared a national historic site in 1974, and the tower itself was designated at Classified Federal Heritage Building in 1994. The lighthouse is one of just seven in Canada to hold this double classification.

Just after the lighthouse was set to open for the 2017 tourist season, Cap-des-Rosiers Lighthouse Historic Site Committee, the non-profit agency that operates the site, was ordered to close the tower for emergency repairs. The committee completed $10,000 in repairs and was poised to open the tower when it was told mold had been discovered in the tower. The lighthouse finally opened for the season on July 13, 2017, but it is in need of $6.5 million in repairs. The municipality of Gaspé passed a resolution in July 2017 calling for the Department of Fisheries and Oceans to transfer ownership of the lighthouse to Parks Canada, which is mandated to preserve National Historic sites.

For a larger map of Cap des Rosiers Lighthouse, click the lighthouse in the above map.

From Gaspé, drive northeast into Forillon National Park for 41.6 km (26 miles) on Route 132 to Cap-des-Rosiers, where you will see the lighthouse alongside the road. Cap des Rosiers Lighthouse is open for climbing from mid-June through mid-September. For more information, call (418) 892-5767.


There are a couple of accommodations available right next to the lighthouse. We stayed at Motel du Haut Phare located across the street from the lighthouse, but the B&B Au pied du phare is just next to Canada's tallest lighthouse.