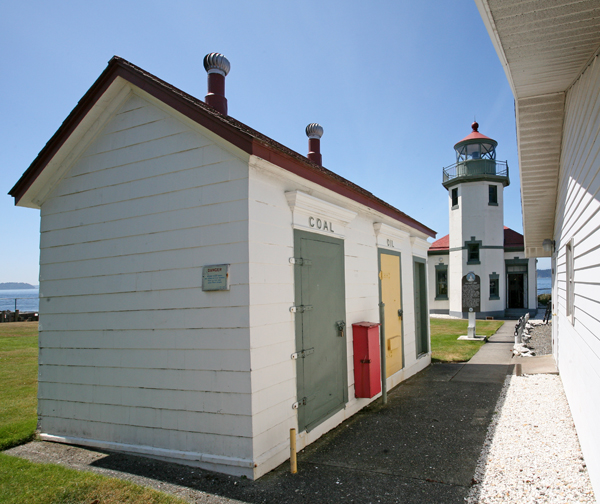 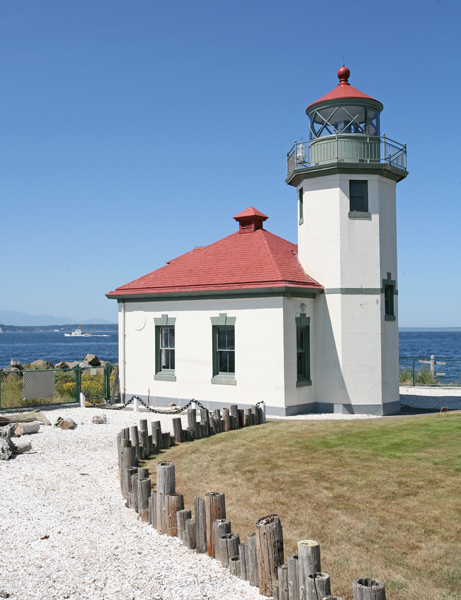 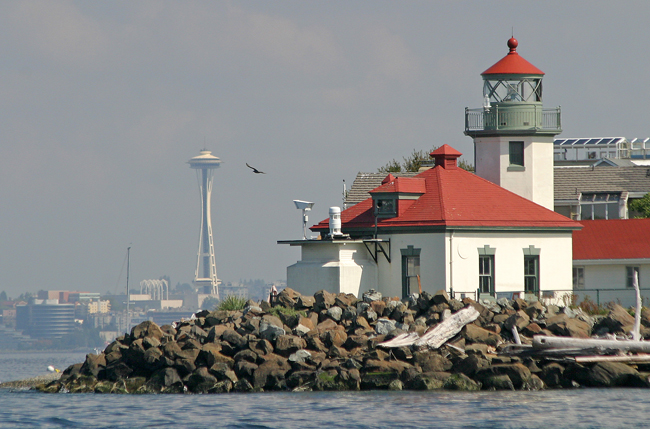 Alki, the Washington State Motto, is a Chinook Indian word meaning by and by. In November 1851, twenty-four people from the schooner Exact landed at present-day Alki Point and formed a colony. The settlers called their new home New York, however, when its growth was markedly slower than that of its east coast counterpart, the name was changed to New York  Alki. Today, the community in West Seattle is known simply as Alki. A monument commemorating the landing of the original colonists, which led to the development of the Seattle area, is found at the intersection of Alki Avenue and 63rd Avenue, not far from Alki Point Lighthouse. Alki Point marks the southern entrance to Seattles Elliott Bay, and a 320-acre parcel of land that included the point was sold to Hans Martin Hanson and his brother-in-law Knud Olson in 1868 for $450. At night, the pair would reportedly light a lamp on the point as a service to mariners. In 1887, the Lighthouse Service finally recognized the need for an official light and placed a lens-lantern atop a wooden post at the point. Hanson was hired to care for the light and received $15 a month for filling the tanks, trimming the wicks, and cleaning the glass. A lighthouse tender would off-load several barrels of coal oil every six months to fuel the beacon. When Hans passes away in 1900, his son Edward (Edmund) inherited the property at Alki Point along with the official job of lightkeeper. The family, however, had been sharing responsibility for the light for several years and would continue to do so for some time. Edward Hanson was listed in a Seattle city directory as keeper of the light on Alki Point as early as 1891 and as late as 1907.

In 1895, the Lighthouse Board requested $6,000 for establishing a fog bell and a suitable dwelling at Alki Point. This request was repeated until Congress appropriated the desired on June 28, 1902. Five years later, a site for the fog signal still had not been obtained, and another $8,000 was allocated for the project. An act of June 17, 1910 authorized another $33,000 for the work, which had been expanded to include a light, raising the total sum to $47,000.

After the government purchased an octagonal parcel at the tip of the point from Edward Hanson for a sum of $9,999, the present concrete fog signal building with attached, thirty-seven-foot octagonal tower was completed on April 29, 1913, and the station was activated a few weeks later on June 1.

The fourth-order Fresnel lens used in the tower was manufactured in Paris by L. Sautter and Lemonnier and contained multiple bulls-eye panels. A clockwork mechanism, powered by a suspended 110-pound weight, was used to rotate the lens every ten seconds, producing a group of five white flashes followed by a five-second eclipse. The weight had to be wound up every five hours to keep the lens revolving.

To assist mariners in times of fog, two four-horsepower, oil engines were used to fill a tank of compressed air, which was then directed over a reed found in trumpets mounted on the north, east, and south walls of the lighthouse. The Daboll foghorns produced the following sound pattern: three-second blast, six seconds of silence, three-second blast, eighteen seconds of silence.

Two eight-room, frame dwellings were constructed for the keepers, and an oil house was built to store the kerosene the stations fuel. The original light source used in the stations Fresnel lens was an incandescent-oil-vapor lamp.

As dependable commercial electric current was available at the point in 1919, a three-horsepower electric motor was installed in placed of one of the oil engines in the fog signal building. The upgrade saved money, took up less space, and was less of a fire hazard. The electric motor drove a hydroturbine compressor, in which twice during each revolution water alternately entered and receded from the rotor, acting as a piston to produce thirty cubic feet of compressed air per minute at ten pounds per square inch.

One of the head keepers of Alki Point had an interesting hobby to which he devoted many hours while keeping an eye on the light. Charles N. Elliot was known as a one-man reference library as a result of the time he spent researching the works of Walt Whitman and collecting many original works and postcards written by the poet. In a newspaper article, Elliott commented, watching the light on long foggy nights leaves me plenty of time to sit in my library, and Elliot used that time to become an expert on Whitman. Elliot even published a collection of writings on Whitman made by the poets friends entitled Walt Whitman, as Man, Poet and Friend.

A sign in front of the lighthouse notes that Alki Point Lighthouse is one of thirteen along the shores of Puget Sound, and that one of the last two civilian lighthouse keepers in the country retired at the light in 1970. This keeper was Albert Anderson, who joined the Lighthouse Service in 1927 and was stationed first on the Columbia River Lightship. When the Coast Guard assumed control of lighthouses in 1939, the keepers could either join the Coast Guard or serve as civilian keepers. Anderson chose the latter option and served at Tillamook Rock and Cape Blanco before transferring to Alki Point in 1950. It wasnt the pay that kept Anderson at his post for so long, as the annual salary of a civilian keeper had been stuck at $5,100 for over a decade when Anderson was interviewed in 1969. It has been a long time between raises, remarked Anderson, but at least his job came with a house and a retirement plan.

In 1962, Alki Points fourth-order Fresnel lens was replaced with an airway beacon, a rotating, reflecting light similar to those used at airports. This new beacon showed a flash every five seconds and was six times brighter than the Fresnel lens, which is now on display at Admiralty Head Lighthouse.

After automation, one of the two keepers dwellings at Alki Point was remodeled to house the Commander of the Thirteenth Coast Guard District, while the second dwelling housed a resident keeper. The Commander later moved to Medina, and the two dwellings became home to senior Coast Guard officers. Two years after the fog signal at Alki Point was discontinued in 2005, the Commander moved back to the station with its scenic location on Puget Sound.

The original lens-lantern used at Alki Point was on display in the lighthouse until the early 1970s, when a thief broke in and stole the lantern. Although law enforcement was notified, the perpetrator could not be tracked down. A few years later, a woman showed up in Seattle inquiring about the value of a lantern that her late husband had purchased from an antique dealer in Southern California. The dealer in Seattle had a suspicion that the lens might have come from Alki Point and notified the police. By contacting the dealer in Southern California, the seller of the lantern was identified and arrested. Amazingly, his fingerprints were still on the lantern, which helped lead to his conviction. He got two years, and we got our lantern, said retired Coast Guard Captain Gene Davis. The lens lantern is now safely displayed at the Coast Guard Museum in Seattle, and a replica is exhibited at the lighthouse.

For a larger map of Alki Point Lighthouse, click the lighthouse in the above map.

From Highway 99 south of Seattle, take Spokane Street west across the two bridges. Turn right onto Harbor Avenue, which after a while will become Alki Avenue, and follow it around the edge of the bay to the lighthouse.

The lighthouse and tower are open for tours on Sundays from Memorial Day weekend through Labor Day weekend from 1 p.m. to 4:00 p.m.

The lighthouse is owned by the Coast Guard. Grounds/tower open during tours, dwellings closed.


There was a Fresnel lens on display inside the Alki Point Lighthouse during a visit in 2006, but it was never used on site. Text posted above the fourth-order lens, which carried the markings of Henry-LePaute, stated that the lens was used at the Sentinel Island Lighthouse in Alaska and the lens used at Alki Point was on display at the Admiralty Head Lighthouse, where it had also previously been used.

Later that day, we paid a visit to Admiralty Head Lighthouse and saw the Sautter and Lemonnier lens used in the Alki Point Lighthouse. Adjacent to this multi-bull's-eyed lens was a fixed Sautter & Cie lens that was also identified as having been used at Sentinel Island in Alaska.


You definitely need to try to visit this lighthouse when it is open for tours. Otherwise, it is impossible to get a good look at the lighthouse. We visited the lighthouse once when it was not open and found one of the tenants of the keeper's dwellings putting up "Beware of the Dog" signs on the chain-link fence around the property. I doubt that there is a ferocious dog there, but based on the scowl we received from the lady posting the signs, I would think twice about disturbing the occupants. I do realize that the tenants will change periodically, but the lighthouse should be considered inaccessible outside of tour hours.