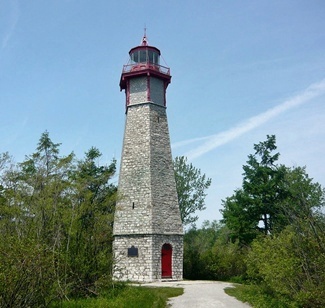 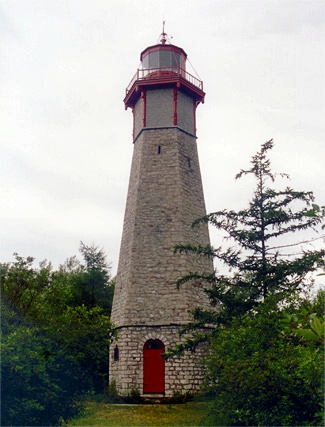 In 1793, John Graves Simcoe, the first Lieutenant Governor of Upper Canada, moved the provinces capital from present-day Niagara-on-the-Lake to York, known now as Toronto, where it would be less prone to attack by the United States. A long, finger-like peninsula extended out into Lake Ontario at York, creating a natural harbour, and Simcoe ordered defense works to protect the harbours entrance. Fort York was built on the mainland, and opposite this, a blockhouse was placed on the tip of the peninsula, which Simcoe named Gibraltar Point, as he felt it could be fortified so as to be impregnable. In 1803, noting that they were necessary and essential to the safety of vessels on Lake Ontario, the Parliament of Upper Canada authorized the construction of the provinces first three lighthouses: one on Gibraltar Point, one on Mississauga Point at the mouth of the Niagara River, and one on Simcoe Island near Kingston. When finished in 1804, Mississauga Point Lighthouse became the first lighthouse on the Great Lakes, but when it was demolished in 1813, the title of oldest standing lighthouse on the lakes was passed to Gibraltar Point Lighthouse, which was completed in 1808. (Nine Mile Point Lighthouse, the lighthouse authorized for Simcoe Island, was not built until 1833.)

On March 16, 1808, the Upper Canada Gazette announced the pending construction of Gibraltar Point Lighthouse: It is with pleasure we inform the public that the dangers to vessels navigating Lake Ontario will in a great measure be avoided by the erection of a lighthouse on Gibraltar Point, which is to be completed in compliance with an Address of the House of Assembly to the Lieutenant Governor. The address referred to was made to Lieutenant Governor Francis Gore on March 9, 1808, and on April 6, he visited the peninsula and chose the site for the lighthouse.

Hexagonal in shape, Gibraltar Point Lighthouse was built of limestone from the Queenston Quarry near Niagara River and originally stood sixteen metres (fifty-two feet) tall, until it was raised nine metres (thirty-feet) in 1832 to a total height of twenty-five metres (eight-two feet). No light was shown from the lighthouse from May 30 until nearly the end of June in 1932 while the lighthouse was being modified.

John P. Rademuller was hired as the first keeper of the lighthouse, and he served until he met a tragic end, as reported in the January 14, 1815 edition of theYork Gazette:

Died on the evening of the 2nd of January, J.P. Rademuller, keeper of the lighthouse on Gibraltar Point. From circumstances there is moral proof of his having been murdered. If the horrid crime admits of aggravation when the inoffensive and benevolent character of the unfortunate sufferer are considered, his murder will be pronounced most barbarous and inhuman. The parties lost with him are the proposed perpetrators and are in prison.

Three months later, the Gazette reported, No conviction of the supposed murderers of the late J.P. Rademuller. Though the details of what happened that night in January 1815 have been lost, legend has it that soldiers from the York garrison visited Gibraltar Point that night to obtain beer from Keeper Rademuller. Some accounts say the keeper refused to sell to the soldiers, and others claim he overcharged them, but all agree that the soldiers became enraged, killed the keeper, and disposed of his body.

James Durnan and his son George, who between them kept the light from 1832 to 1905, were both known to talk about the murder of the lights first keeper, and in 1893, George Durnan uncovered a jaw bone on the point. Due to the mystery surrounding the demise of Keeper Rademuller, rumours persist to this day that Gibraltar Point Lighthouse is haunted. Click here to watch a video segment shot in 1958 about the lighthouses ghost that features a member of the Durnan family and Deedee Dodds, who was serving as caretaker of the lighthouse at the time.

On the night of December 18, 1832, the schooner Sir John Colborne, loaded with lumber, ran aground on a bar that stretches north from Gibraltar Point. Freeman Bay, the schooners owner, petitioned the government for the losses he sustained, and after an investigation determined Gibraltar Point Lighthouse was not lit that night, Bay was awarded £100. The custom house officer for York testified that the keeper was supposed to come ashore on the 17th to get more oil, but he did not do so until the 19th, and the lighthouse thus ran out of oil on the 18th.

The following description of the station was made in 1877 by Darius Smith, the Superintended of Lights above Montreal:

Gibraltar Point is a white hexagonal tower, 62 feet high, with an iron lantern, 8 feet 8 inches in diameter, containing 11 mammoth flat-wick lamps, and two 18-inch and nine 15-inch reflectors, and is a while fixed catoptric light, which can be seen 18 miles in clear weather.

There is a bell tower [erected in 1872] connected with this light station, and contains a bell weighing 996 lbs., worked by machinery. This bell is of great service to vessels.

The bell tower and lighthouse are well kept by Mr. George Durnan, the Keeper, who has a family of twelve children.

The lighthouse requires a new lantern, as the old one is rusted and decayed by long use, and the glass is too small, as the bars obstruct the light. The bell tower requires painting. The best time to have repairs done would be during the winter.

A new lantern room and illuminating apparatus were placed atop the lighthouse in 1878, and a revolving apparatus was installed in 1883, changing the lights characteristic from fixed white to a white flash every forty-five seconds.

A wooden fog alarm building was built 1,150 feet southwest of the lighthouse in 1885 and equipped with a fog horn supplied by the Neptune Foghorn Company of Quebec for $2,100. No longer needed, the fog bell from Gibraltar Point was transferred to Mississauga Point at the mouth of the Niagara River. The fog alarm on Gibraltar Point was discontinued in 1905, after a fog alarm was placed at East Gap, an opening on the peninsula east of Gibraltar Point that was created by a storm in 1858.

A fourth-order Fresnel lens was placed atop the lighthouse in July 1915, and the lights characteristic was changed to four seconds of light followed by an eclipse of four seconds. The lighthouse was electrified during the winter of 1916  1917, and Blake Matthews the lights last official keeper left the following year.

The characteristic of the automated lighthouse was changed in 1945 from flashing white to fixed green, and it retained this latter signature until it was deactivated in 1959 and replaced by a nearby tripod tower that displayed a flashing red light.

Gibraltar Point Lighthouse is owned by the City of Toronto, and tours are possible of the interior of the stone tower are possible by appointment.

For a larger map of Gibraltar Point Lighthouse, click the lighthouse in the above map.

Gibraltar Point Lighthouse can be reached by taking any of the ferries that run to the Toronto Islands, but the two that require the shortest walk are the Centre Island and Hanlan's Point Ferries. Plan on a roughly 2 km walk to the lighthouse.

The lighthouse is owned by the City of Toronto. Grounds open, tower closed.