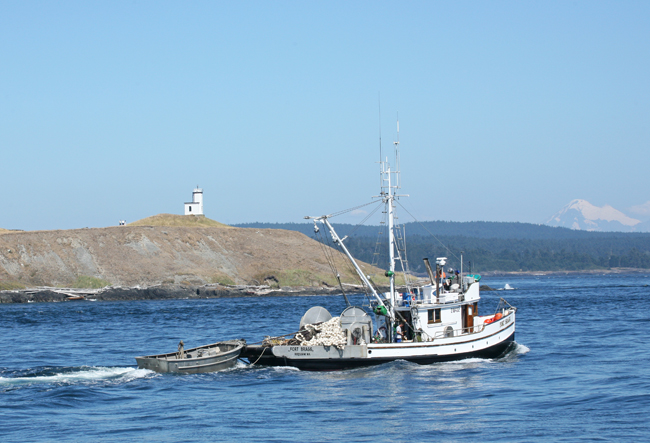 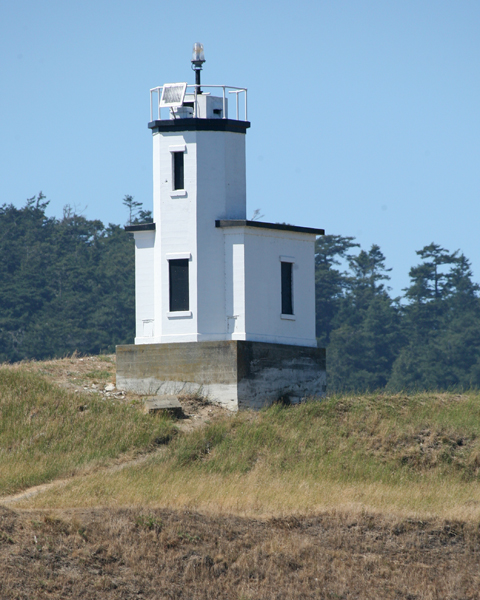 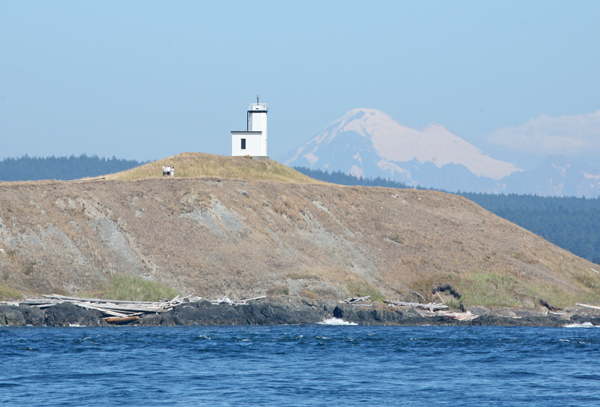 The southern tip of San Juan Island is known as Cattle Point, and, as you have likely surmised, there has to be a cattle-related story connected to the point. Cattle first appeared on the point in 1853, when the Hudsons Bay Company established a ranch on the southern end of the island, populating it with sheep and cattle that were off-loaded near the point. Four years later, a vessel was stranded nearby, and its load of cattle was forced to swim ashore near the point. The following year, 1858, Cattle Point showed up on British charts. In 1846, the Treaty of Oregon was signed in London, establishing the forty-ninth parallel as the border between the United States and British holdings from the Rocky Mountains to the middle of the channel which separates the continent from Vancouvers Island then south through the channel to the Strait of Juan de Fuca and west to the Pacific Ocean. There was just one problem though. Was the boundary channel meant to be Haro Strait, west of the San Juan Islands, or Rosario Strait, located east of the archipelago?

Both countries claimed the islands and had residents living on San Juan Island. The dispute came to a head on June 15, 1859, when Lyman Cutlar, an American, shot and killed a Hudsons Bay Company pig, which was rooting in his garden. When British authorities threatened to arrest Cutlar and evict his countrymen, the Ninth U.S. Infantry, under the command of Captain George E. Pickett, established a camp near the southern end of San Juan Island. In response, British warships were dispatched to the island. When Rear Admiral R. Lambert Baynes, commander of British naval forces in the east Pacific, arrived on the scene, he wisely declared that he would not involve two great nations in a war over a squabble about a pig.

The two sides agreed to a joint military occupation of the islands until a settlement could be reached. The Americans remained on the southern end of San Juan Island in American Camp, and on March 21, 1860, British Royal Marines established what is now known as English Camp at Garrison Bay on the islands northwest coast. The sides remained deadlocked until the two countries signed the Treaty of Washington in 1871 and decided to have Kaiser Wilhelm I of Germany settle the border dispute. Kaiser Wilhelm referred the matter to a three-man arbitration commission, which roughly a year later ruled in favor of the Americans, and thus the final boundary between the United States and Canada was set.

The first navigational aid on Cattle Point was a lens lantern was first lit on October 1, 1888. George Jakle, the son of a soldier who had been stationed at American Camp and had remained on the island raising sheep, was paid to maintain the light. Jakle would tend the light each day and fill the lanterns reservoir each week, using kerosene from five-gallon barrels that were offloaded at nearby Griffin Bay every few months by a lighthouse tender.

The Navy established a radio compass station at Cattle Point in 1921, and sailors stationed there took over maintenance of the light. Using bearings from stations at Cattle Point, New Dungeness Spit, and Smith Island, ships sailing through the Strait of San Juan de Fuca could pinpoint their location even in dense fog.

The modern thirty-four-foot, octagonal, concrete tower on Cattle Point was erected in 1935, the year the Navy closed the compass station. The lighthouse received a temporary makeover in 1984, when it was used as a backdrop for an Exxon television commercial. The tower was outfitted with a faux lantern room, a railing, a temporary lantern, and a hipped roof for the filming, confusing many a lighthouse buff who saw the commercial.

The lighthouse is located adjacent to the Cattle Point Natural Resources Conservation Area. Parking is available near a picnic shelter housed in an old powerhouse, leftover from the Naval Radio Compass Station, and trails lead from the conservation areas shelter to the lighthouse.

For a larger map of Cattle Point Lighthouse, click the lighthouse in the above map.

Friday Harbor on San Juan Island can be reached by ferry from Anacortes, which is roughly 75 miles north of Seattle. Once in Friday Harbor, follow Spring Street west out of the town. Spring Street will become San Juan Valley Road. From San Juan Valley Road, turn left on Douglas Road and drive 1.5 miles to Little Road. Turn left on Little Road and drive 0.4 miles where it ends. Turn right on Cattle Point Road and drive roughly six miles to the southern end of the island. Cattle Point Lighthouse is accessible via a short walk along an interpretive trail.


Wonderful views can be had from Cattle Point, and eagles are often seen perched atop the large trees near the lighthouse. Just north of the lighthouse is American Camp, home to a company of soldiers during the Pig War. The Pig War started when an American settler shot a pig owned by the Hudsons Bay Company and nearly set off a war between America and Britain. The pig ended up being the only casualty of the standoff, and the conflict was finally settled by arbitration twelve years later, when Kaiser Wilhelm I of Germany ruled that San Juan Island belonged to the U.S., not England.