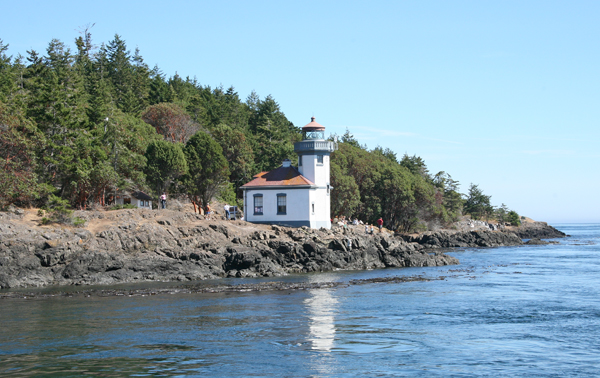 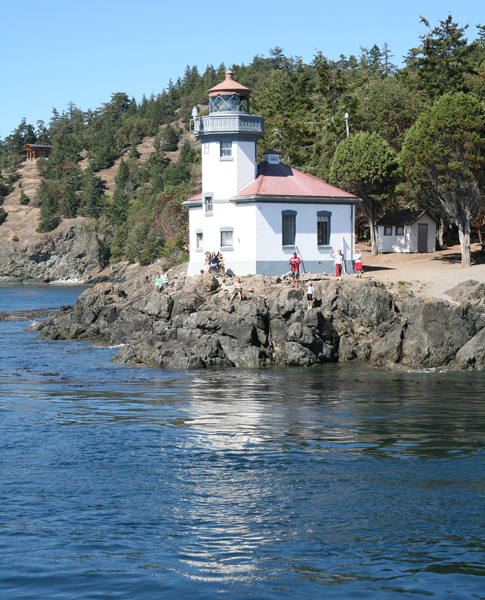 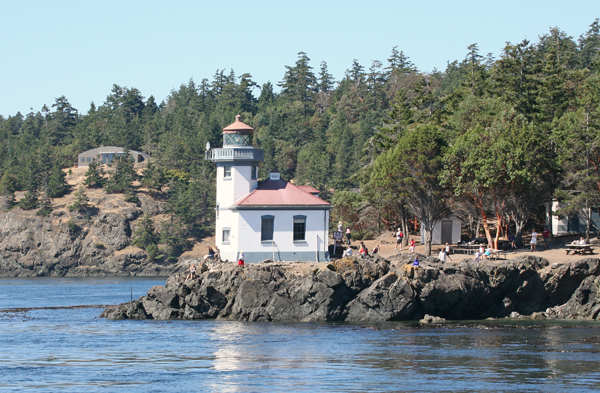 Situated in the northwest corner of Washington State, the San Juan Islands are breathtaking gems that attract numerous visitors and adventurers each summer. Spanish explorer Francisco de Eliza visited the islands in 1791 during an expedition sailing under the authority of the Viceroy of Mexico, Juan Vicente de Güemes Padilla Horcasitas y Aguayo, second Count of Revillagigedo. Eliza named the San Juan Islands in honor of the viceroy, along with Orcas Island, which is short for Horcasitas. Lime Kiln Lighthouse, located on the west side of San Juan Island, the second largest island in the archipelago, borrows its name from the lime kilns built in the area in the 1860s. For roughly sixty years, the area surrounding the kilns was quarried for limestone, and a good portion of the island was logged to feed the fires that transformed the limestone into lime, which was then used in mortar. Remains of the kilns can still be seen today, just north of the lighthouse, and one of them has been renovated and interpreted for the public.

Lime Kiln Lighthouse tenderly watches over the whales and waterways at the entrance to Haro Strait, a major shipping route that links Puget Sound to the Strait of Georgia. The Lighthouse Board first recommended a lighthouse on the western side of San Juan Island in 1908, noting:

All commerce between Puget Sound and Alaska and between Cape Flattery and points in the Gulf of Georgia will be benefited by the establishment of a light and fog signal at this point. Several large vessels have been ashore in the vicinity of Kellett Bluff, and casualties have been avoided merely through fortunate circumstances attending the grounding of the vessels. The Board therefore recommends that an appropriation of $30,000 be made for the establishment of a light and fog-signal at this important point.

Kellet Bluff is located on Henry Island, a small island just offshore from the northwest end of San Juan Island.

An act of October 22, 1913, appropriated $30,000 for new aids to navigation and improvement of existing aids in Puget Sound and adjacent waterways. With this funding, acetylene lights were established at Lime Kiln Point and at Marrowstone Point, and the Slip Point Light Station was remodeled. The need for a major light and fog signal on San Juan Island, however, was still felt, and repeated requests for funds were made until an act of July 6, 1916 appropriated $40,000 for the construction of a light and fog-signal station at or near Kellett Bluff, Henry Island, Wash. or at some point on the west coast of San Juan Island, Wash. After due consideration, Lime Kiln Point was selected as the site for a new fourth-order flashing light and third-class fog signal. The following reasoning led to the selection of Lime Kiln Point:

Vessels proceeding to the northward after leaving Point Wilson have a run of about 32 miles before reaching the proposed location, with no fog signal on the American side. The depths are too great for soundings and there are strong tidal currents of uncertain direction to contend with. A light and fog-signal station will provide a definite point to run for in going north through Haro Strait, and a definite point of departure for vessels bound across the treacherous eastern end of Juan de Fuca Strait for Puget Sound, or bound northward through Haro Strait. This location is where it is customary for vessels to change course. It is important to the mariner that he verify his position here or in this vicinity in order to avoid the dangers on both sides of this narrow strait.

Consisting of a thirty-eight-foot octagonal tower rising from a concrete fog signal building, Lime Kiln Lighthouse was the last major light established in Washington. Proposals for the construction of the station were invited, but the resulting bids were considered excessive, and the work was instead done by hired labor. Construction commenced in August 1918, and the light from the towers fourth-order Fresnel lens was first exhibited on June 30, 1919. Two dwellings, also built of reinforced concrete and containing six rooms, a bath, and a basement, were provided for the keepers.

The lighthouse is built atop solid rock, about twenty feet above high water. The towers helical-bar lantern room, which was fabricated by Wisconsin Iron and Wire Works of Milwaukee, has a diameter of just over seven feet, and is encircled by a concrete deck and gallery. The original Fresnel lens had three 60° panels, situated opposite a 180° spherical mirror, and revolved atop a mercury float to produce a group of three flashes every ten seconds at a height of fifty-five feet above the surrounding water. Kerosene for the incandescent oil-vapor lamp was stored in a tank at the foot of the tower and forced to the service room by compressed air.

The stations first fog signal was a third-class reed horn operated by compressed air furnished by a duplicate set of oil-engine-driven compressors. Two large horns, mounted on the north and south walls of the lighthouse, sounded a group of two blasts every twenty seconds when needed. A six-inch well, driven into solid rock and located 100 feet southeast of the lighthouse, provided a plentiful supply of water for the station.

While serving as the stations second head keeper in 1923, Louis Betteker provided dry clothing to two men after they were forced to abandon their boat Fairplay when it caught fire. Keeper Betteker later transported the stranded men to Friday Harbor. Betteker had previously served at two lighthouses in Alaska and Semiahmoo Lighthouse in Washington, and would end his thirty-year career at West Point Lighthouse in 1938.

Arvel Settles transferred to Lime Kiln Point from Grays Harbor Lighthouse in 1935 with his wife Helga and their five children. The Settles were assigned to Point Arguello, California in 1920, and after four years there and a year or two at Point Arena Lighthouse and Desdemona Sands Lighthouse, they ended up at Grays Harbor in 1927. While there, their son Charles developed asthma, prompting the district lighthouse inspector to send them inland to Lime Kiln where the air would be drier.

Though Helga had to do her wash on a scrub board, she loved life at Lime Kiln and had a fine vegetable garden and impressive roses. The one hardship was having to always maintain a clean house, as she never knew when the inspector would arrive. The children rode the bus to Friday Harbor to attend school, and their father would pay them ten cents to wind up the weights that revolved the lens in the lantern room.

Charles and Jack Settles would often catch fish for the cookhouse at the lime kilns in exchange for fresh pies. One day while out on the water, the boys were chased by a small whale. Oh, did we go, recalled Charles. We made the water fly.

Lime Kiln was the last lighthouse in Washington to be electrified, not receiving this modern convenience until well after World War II. The Bonneville Power Administration laid a submarine power cable from Anacortes to the San Juan Islands in 1951, and power lines were then run to Lime Kiln Lighthouse. The Fresnel lens was eventually replaced by a non-rotating, 375-mm drum lens with an electric light bulb, and two electric foghorns were installed. The stations light was automated in 1962, and a chain-link fence topped with barbed wire was built around the lighthouse to deter vandals.

Today, the tower flashes a white light once every ten seconds, and the fog signal has been discontinued. The two original keepers dwellings can be seen in the woods near the lighthouse and are used to house Lime Kiln State Park personnel.

On December 15, 1978, Lime Kiln Light Station was declared a Historic Site by the Washington State Advisory Council on Historic Preservation and placed on the Washington Heritage Register and the National Register of Historic Places.

In 1985, the lighthouse and surrounding sea were dedicated as a whale sanctuary and research station for marine mammal scientists. Under the direction of the Whale Museum in Friday Harbor, scientists based in the lighthouse track the movements and behavior of the orca whales, which reside in the area. Webcams and a hydrophone are located at the lighthouse to facilitate remote tracking of the whales. With the lighthouse staffed once again, the chain-link fence encircling it was removed.

On a clear day there is a commanding view of the Olympic Mountain range and the shores of Vancouver Island from the lighthouse. On many days though, its misty and soft. If you listen real closeyou just might hear a whale sing.

For a larger map of Lime Kiln Lighthouse, click the lighthouse in the above map.

Friday Harbor on San Juan Island can be reached by Washington State Ferry from Anacortes, which is roughly 75 miles north of Seattle. Once in Friday Harbor, follow Spring Street west out of the town. Spring Street will become San Juan Valley Road. From San Juan Valley Road, turn left on Douglas Road and drive 1.7 miles to Bailer Hill Road. Turn right on Bailer Hill Road and drive roughly four miles, where it will turn into Westside Road. Follow Westside Road 1.5 miles to Lime Kiln State Park. A short hike from the parking area is required to reach Lime Kiln Lighthouse. The interior of the lighthouse is used for whale research, but tours are offered in the summer. The park grounds are open from 8 a.m. to dusk. Tours of the lighthouse are offered by Friends of Lime Kiln Society on Thursdays and Saturdays from 7 p.m. to sunset, mid-May through mid-September, and whale talks are held at the lighthouse at 3 p.m. on Fridays and Saturdays during the summer.

The lighthouse is owned by the Coast Guard and managed/maintained by Washington State Parks. Grounds open, lighthouse open during tours.


In two visits to Lime Kiln State Park, we never did see a killer whale from the lighthouse. However, during another trip, we took a whale watching trip from Victoria, BC, which took us to the waters in front of the lighthouse, and we were fortunate to see several orcas.