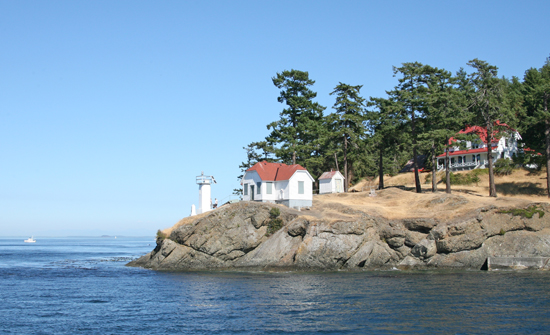 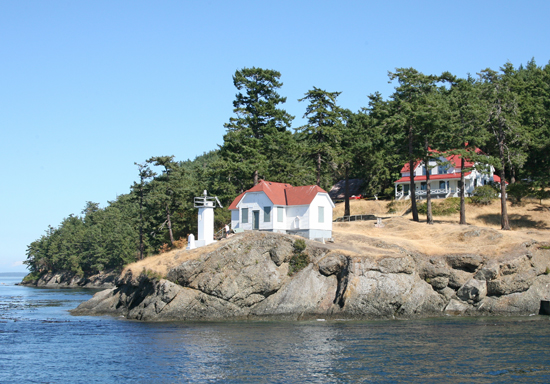 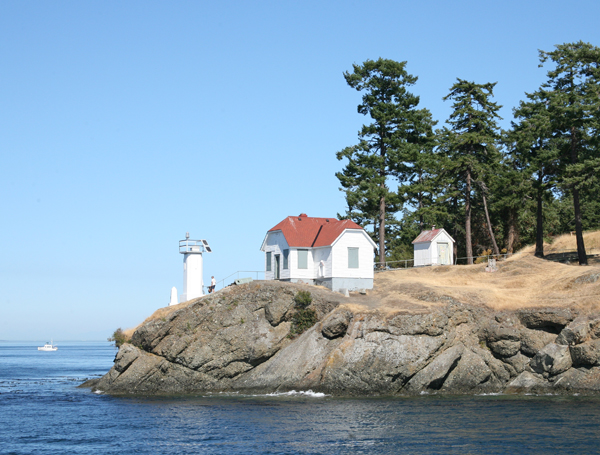 Vessels traveling from the Strait of San Juan de Fuca to places north such as Vancouver first follow Haro Strait due north, and then make a hard right at Turn Point, the northwestern corner of Stuart Island. The U.S./Canadian border follows the same route, as do pods of Orcas. Canada had already built a lighthouse on Discovery Island to mark the southern entrance to Haro Strait when the Lighthouse Board requested $15,000 in 1888 for the establishment of a light and fog signal station at Turn Point, the northern entrance to the strait. The request was repeated each year until Congress appropriated the desired sum on March 3, 1891. The U.S. Government had surveyed Stuart Island in 1874 and offered most of the resulting lots for homesteading. The parcel that included Turn Point, however, was held back as a possible site for a lighthouse, and in 1892 a detailed survey of Turn Point was made and specifications were prepared for the necessary buildings at the planned station. On December 27 of that year, after an advertisement for bids had been published, a contract was signed for the construction of the stations duplex, fog signal building, barn, water tanks, boathouse, and stake light.

Work got underway in March 1893, and the buildings were finished by the end of July. After the fog-signal machinery was installed, the station commenced operation later that year on November 30. The stations light consisted of a lens lantern displayed from a post located close to the point, and a steam-powered Daboll trumpet sounded a three-second blast every thirty seconds to guide mariners in thick weather.

Albert F. Allen was appointed the first head keeper at Turn Point, and he was assisted by John Q. Latta. Each of the keepers was given one side of the two-story duplex to house their families. For transportation, a sailboat was built and delivered to the station, where it was kept inside the boathouse.

Peter Nicholai PN Christiansen, a Norwegian immigrant and merchant seaman, replaced Latta as assistant keeper in 1894, relocating from Oakland, California with his pregnant wife, Theodine, and daughter, Anna. Charlie Christiansen, born two months after the couples arrival at Turn Point, was the first white baby born on Stuart Island. When Keeper Allen left for another assignment in 1895, Edward Durgan was promoted from assistant keeper at nearby Patos Island to head keeper at Turn Point.

During the evening of February 16, 1897, repeated blasts of a ships whistle brought Durgan and Christiansen rushing out into the frigid winter night to find that the tug Enterprise had run aground on rocks near the station. Equipped with pike poles, the keepers plunged into the water and managed to free the tug and direct it to a safe moorage. The captain appeared to be the only person on board, until several drunken crew members were found to be below deck.

The sober captain informed the keepers that other crew members were drifting aboard a barge that the captain cut lose before running aground near the light. The barge was soon located, and its occupants were safely brought ashore through the use of a breeches buoy. To add to the excitement of the evening, one of the intoxicated sailors on the tug brandished a butcher knife and threatened his comrades. With some help, the captain was able to subdue the knife wielder, who was placed in a straight-jacket and locked up in the stations hen house.

For their rescue efforts, the keepers received a letter from the Lighthouse Board that read, in part, : Such services to humanity merit the highest commendation, and the Board is glad to number among its employees men of such sterling courage and fidelity to duty, who are willing to jeopardize their own lives in order to save the lives of others.

In 1899, the Lighthouse Board decided the hot-air engines used for the fog signal did not develop sufficient power to run the air compressors, and two fourteen-horsepower oil engines were shipped to and installed at the station. A 960-gallon redwood tank was erected in the fog signals coal room to provide water needed to cool the new engines. The fog signal was typically in operation around 200 hours each year, but in 1896, it was powered up for 929 hours and consumed about three tons of coal. After being converted to an oil engine, the signal consumed roughly thirty gallons of oil each year. An oil house with a concrete floor and galvanized-iron walls was added to the station in 1913.

During World War I, keepers were encouraged to cultivate gardens at stations where this was possible to help offset food shortages. Gardening wasnt too practical at Turn Point, but Keeper Louis Borchers did his part in conserving the food supply by canning fish. During one season, he canned 311 cans using sockeye salmon, pink salmon, smoked salmon, San Juan Island sardines, grayfish, and salmon caviar. The Bureau of Fisheries found Borchers canned fish to compare favorably with commercial products, and Herbert Hoover, United States Food Administrator and later President of the United States, wrote the following regarding Borchers achievements.

The evidence which he has produced of what can be accomplished where raw material swims past the door is very unusual, in view of the amount of work which I know is necessary for a light keeper to perform in the course of his regular duties. I trust that Mr. Borchers success will encourage similar activity on the part of others.

The Lighthouse Service commended Borchers for his efforts and hoped that others would follow his good example. Keeper Borchers arrived at Turn Point in 1902 as assistant keeper and was promoted to head keeper in 1906. Borchers took thousands of pictures during his tenure at the station which ended with his death in 1923. William Auld was the next head keeper, and he was awarded the efficiency flag for 1924 and 1925, meaning his was the best-kept station in the district.

The Lighthouse Service Bulletin for January, 1930 gave the following description of the light at Turn Point.

The illuminating apparatus at Turn Point on the northwest end of Stuart Island in Haro Strait, Wash. is interesting. Lenses from two 300-millimeter lens lanterns are mounted one above the other, with suitable provisions for focusing the lamp filaments and for ventilation. In one lens is fitted a 150-watt, 110-volt special lightship electric lamp, and in the other a 400-watt, 110-volt G-30 type bulb electric lamp and red screen, providing a beam candlepower estimated to be 2,500 for each light. The characteristic obtained by flashes from both lamps is white occulting 2.5 seconds, eclipse 3 seconds, white 2.5 seconds, eclipse 3 seconds, red 1 second, eclipse 8 seconds, for every 20 seconds. Occultations are provided by means of a sign flasher. The current is supplied by a 2.8-kilowatt generator drive by a 6-horsepower oil engine. An auxiliary generator belted to the fog-signal engine is provided, also a storage battery of primary cells consisting of 30 trays of 3 cells each. Other installations of superimposed lanterns are located at Hospital Point range, Mass., Cape Cod Canal Channel lower range rear, Mass., and Honolulu Harbor, Hawaii.

In 1936, the light was updated to a small concrete tower with a 300 millimeter light, and a diaphragm foghorn replaced the Daboll trumpet. The station was automated in 1974, and the keepers dwelling was subsequently used by researchers from the University of Washington as a base for studies on whale migration. Today, the points light flashes white every two-and-a-half seconds, and there is no longer an active fog signal.

The Spokane District of the Bureau of Land Management (BLM) currently manages the station. Working with the Coast Guard, the BLM has undertaken a three-phase restoration project. In 2005, work was done on the roofs of the fog signal building, keepers dwelling, and barn. In addition, several windows were restored using wavy glass and then secured behind rock-proof coverings. In phase two, a power station, consisting of solar panels and a propane generator, was built on the hill above the station. The work for phase three has not been fully determined but may include the establishment of a museum and a guest keeper program at the station.

The Turn Point Lighthouse Preservation Society (TPLPS) has been formed to educate the public about the lighthouse and to aid in its preservation. In 2012, the BLM and TPLPS signed a Cooperative Management Agreement for looking after Turn Point Light Station. TPLPS has led efforts to create a museum in the barn, restore the oil house, and erect a new flag pole.

For a larger map of Turn Point Lighthouse, click the lighthouse in the above map.

Stuart Island is near Sidney on Vancouver Island and Friday Harbor on San Juan Island. A public boat dock is available on Stuart Island at Prevost Harbor, from where it is a two-mile hike to Turn Point Lighthouse.

Orcas Island Eclipse Charters has offered Lighthouse Tours in the past that pass by Turn Point. Outer Island Excursions has offered trips to Stuart Island that include a hike to the lighthouse.

Click here to view images from the BLMs webcams at Turn Point.

The lighthouse is owned by the Coast Guard and managed by the Bureau of Land Management. Grounds open, dwelling/tower closed.