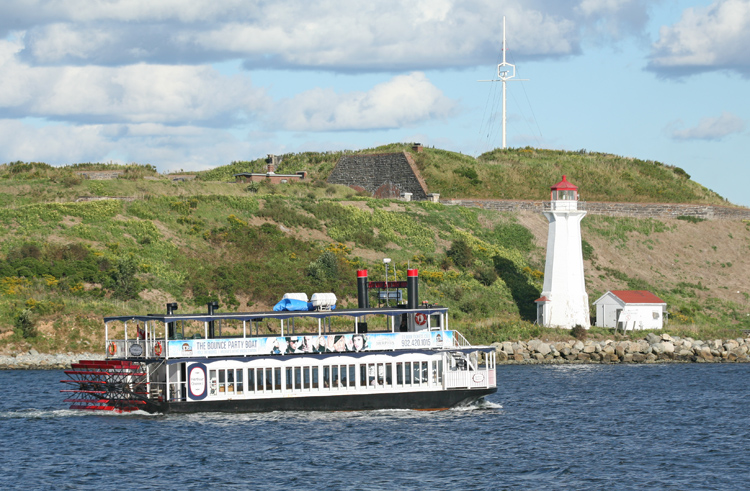 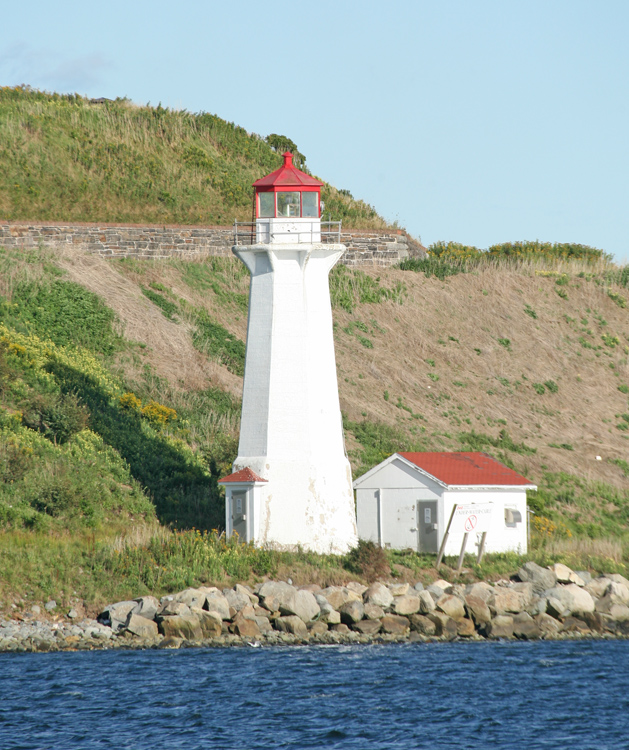 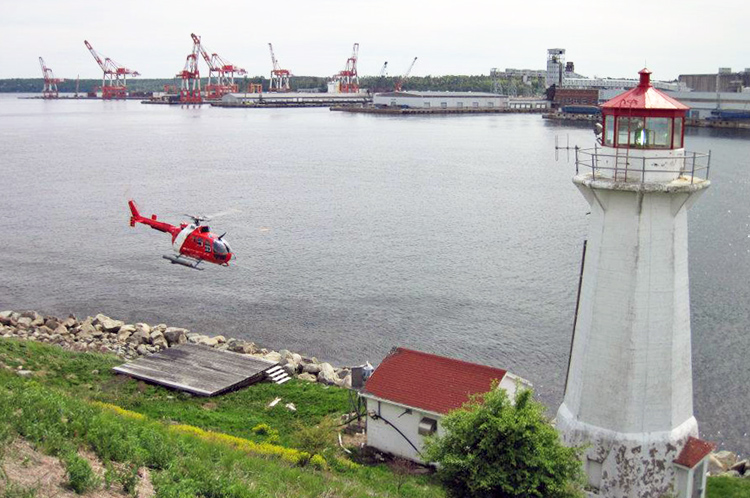 Georges Island is situated just off the waterfront in Halifax and has played an important role in both defending and lighting the harbour. Named after King George II, Georges Island became home to a battery of cannons in 1750, just a year after Halifax was founded. The island served as a prison for large numbers of Acadians during the Acadian Deportation, 1755  1763, and earthworks were added to the island during the American Revolution. In 1794, Prince Edward, son of King George III and later the father of Queen Victoria, became the commandant of Halifax, and four years later, he had a fort built on Georges Island. He named the star-shaped fortification Fort Charlotte, after his mother. During the War of 1812, a Martello Tower was built on Georges Island. A new, largely subterranean Fort Charlotte, which had and upper battery and a lower battery, each equipped with rifled muzzle-loading guns, was built on the island in the 1860s

A number of respectable merchants engaged in navigation requested that a lighthouse be built on Georges Island in 1857, but a beacon there had the lowest priority of those approved that year and the allocated funds were insufficient to have it built. S. Cunard & Co. and the Superintendent of Lighthouses for Nova Scotia petitioned for a harbour light on Georges Island in 1866. The Committee on Navigation Securities agreed that the light should be built without delay, but once again, available funds must have been insufficient.

Work finally began on a lighthouse on Georges Island in 1875, and it was placed in operation on January 15, 1876. The Department of Marine provided the following description of the structure:

It is situated on the west side of George's Island in the harbour of Halifax. The building is a square wooden one 21 feet high painted drab, the top of the lantern is painted black. It was built by Mr. Thomas Halliwell for the sum of $1,300.

There are two fixed white lights 20 feet apart vertically, the upper one being 50 feet above highwater mark. They both show seaward towards the south and into the harbour on the north side. On the west only the upper light can be seen. The illuminating apparatus is as follows. Three mammoth flat wick burners with 17-inch reflectors and one B lamp with 12-inch reflector.

The light is for the purpose of guiding vessels into and out of the harbour of Halifax through the channel west of the Island. Vessels entering the harbour passing Meagher's Beach will keep this light on the starboard bow, and after passing the Island can take up a berth in any part of the harbour.

Mr. Robert Ross, sapper in Royal Engineers, was appointed keeper 18th January 1876, at a salary of $150 per annum.

In 1889, the fog bell from Meaghers Beach was taken to Georges Island, and, after having been mounted on the west side of the lighthouse, was placed in operation on April 1. Two unfinished bedrooms in the dwelling portion of the lighthouse were finished and fitted with doors in 1892.

Early in the spring of 1903, a flashing red light replaced the two fixed white lights exhibited from Georges Island Lighthouse. This revolving catoptric illuminating apparatus was housed in a red iron lantern surmounting a new square wooden tower that had been built on the western side of the keepers dwelling. The tower measured thirty-five feet tall from its base to the vane on its lantern room and was painted white with a black diamond on its south side. Though Georges Island Lighthouse no longer functioned as a pair of range lights itself, it became the front light of a range with this change in 1903. A seventy-foot-tall, white tower at the Dartmouth Exhibition Center, over three kilometres northwest of the island, exhibited a fixed red light that served as the rear light of what was called Halifax Harbour Inner Range. This tower also had a black diamond on its seaward-facing side. By 1920, a black, pyramidal, skeletal tower was built roughly 100 metres from the exhibition building to serve as the rear light.

Fire destroyed Georges Island Lighthouse in 1916, and a provisional light was exhibited until the present octagonal concrete tower was built in 1917. The new lighthouse was topped by an eight-foot cast-iron lantern room that housed a 270° fourth-order Fresnel lens. The brick keepers dwelling that remains on the island today was also constructed in 1917.

Victor Matthews and his wife Ethel moved into the two-bedroom keepers dwelling on the island in 1946 with four children, two sons and two daughters. Dale, just a baby at the time, fondly recalls the familys time at the lighthouse:

We did not have any electricity on the island so we had a wood/coal stove in the kitchen and a floor furnace in the hallway. My mother, Ethel, had to use a battery-operated washing machine, and a battery was used in the radio, too. The irons had to be heated on the stove when we were ironing. We had ship to shore phone with the radio station, and had to call them every night. There were two wells on the island for our use. The well by the house was used for the bathroom. The other well, out further, was used for drinking water. The water for the bathroom had to be pumped through a pipe in the kitchen to a holder up in the attic. What a nuisance!

We had a little bit of luxury, and that was my father Victors boats. He had the second fastest boat in Halifax Harbour. Ethel was known as the best Captain (showoff) of that boat. Dad had two other boats, a punt, and my brother, Leonard had a small outboard boat. We also had a big dory.

I did have problems going to school. Sometimes Dad would drop me off at pier 20, National Harbours Board; or Kings Wharf. One day in the winter he went down to get the boat and a log in the harbour hit the stern of the boat and holed it. The stern of the boat sank and the bow was pointing upward. That was the first time that ever happened to us.

From Grade 6 on, I had to board in Halifax. I lived at the South end, the North end, and in-between. In 1960, I lived with my sister, Alfredia in South Woodside.

When we lived on Georges Island, we had hens, chickens, and beautiful white rabbits. One time my father, Victor, had a visitor up in the islands citadel. It was a deer that swam to the island and he fed it. Victor was the deers friend, but it left in a few days. Another deer that swam to the island fell into the moat and could not get out. We had to call the police through our radio station and get permission to take its life. My brother Sherman shot the deer, and we had to get it out of there. We were not allowed to eat it.

Victor Matthews left the island in 1964, and David Barkhouse was placed in charge of the light. Commercial power reached the station in 1970, and two years later the station was automated. The towers distinctive red stripe was added in 1973.

Georges Island was declared a National Historic Site in 1965. In March 2009, the federal government designated $3.5 million for the installation of water, sewer, and electrical services on the island, which was seen as the first step towards granting public access. In August 2019, the federal government announced it would be providing $3.6 million to develop visitor facilities on the island. A wharf will be added, trails will be improved, and signage will be installed. All of this was to be done so the island could open to visitors in 2020.

For a larger map of Georges Island Lighthouse, click the lighthouse in the above map.

Georges Island Lighthouse can be seen from the shoreline in Halifax. The closest views come from Pier 21, which can be reached by taking Lower Water Street along the harbour in Halifax south until you reach Marginal Road. Pier 21 is located at 1055 Marginal Road.