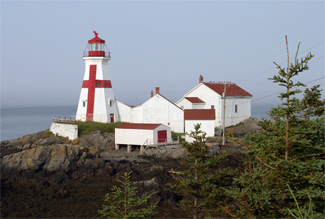 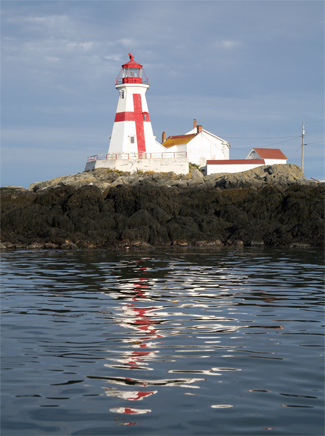 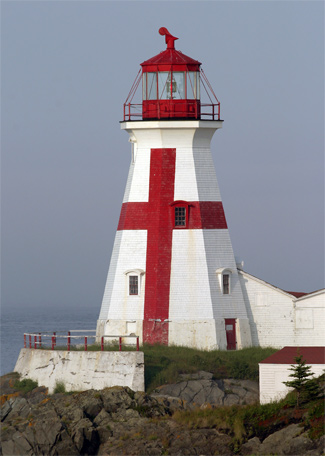 In early February 1829, the House of Assembly of New Brunswick appropriated £400 for defraying the expense of building a Light House on the northern head of Campo Bello Island. Work on Head Harbour Lighthouse soon commenced, and the light was placed in operation later that year with John Snell serving as its first keeper at an annual salary of £120. The total expense for constructing the lighthouse, a fifty-one-foot-tall wooden octagonal tower that remains standing today, was £656. The importance of Head Harbor Lighthouse is illustrated by the fact that it was the first lighthouse constructed in New Brunswick outside of Saint John Harbour. West Quoddy Lighthouse was established nearby in the United States in 1808, and Head Harbour Lighthouse was sometimes known as East Quoddy Lighthouse to differentiate the two.

Head Harbour Lighthouse was built on a small, rocky islet, located off the northern tip of Campobello Island and accessible by land only at or near low tide. Communication with the lighthouse was primarily by boat until £80 was expended in 1830 to establish a road between the northern end of the island and Wilsons Beach, the nearest settlement.

The April 10, 1830 edition of The Courier newspaper in Saint John recorded that during a recent gale the sea broke nearly halfway up the lighthouse, which stood on a rock twelve feet above ordinary tides, and carried away Keeper Snells boat, firewood, spring water, barn, cow, and every other removable article. Through her own instinct or sagacity, the cow managed to reach the shore of a neighboring island.

Keeper Snell evidently employed an assistant to help him tend the light as in 1835 he was granted £25 to help pay for the medical bills and passage to England for Henry Mably, who was maimed and lost his eyesight through the accidental explosion of a charge of gunpowder while working at the lighthouse. Keeper Snell resided in the lower portion of the lighthouse until a dwelling was erected near the tower in 1840. At that time, eight lamps set in twenty-two-inch reflectors were used in the lantern room, which was considered too small, as the keeper was unable to clean the lamps and reflectors without significant inconvenience.

In 1842, a larger lantern room was placed atop Head Harbour Lighthouse, and the original lantern room was installed on the St. Andrews Lighthouse. This same year, a large red cross was painted on the eastern side of Head Harbours white tower to provide a distinctive daymark for those navigating that portion of the Bay of Fundy.

Mary Snell grew up at Head Harbour Lighthouse, where she lost her sight at the age of seven due to an illness. In her later years, she recorded her memories of her childhood spent at the lighthouse. It would seem as though I instinctively felt that I would not always enjoy the blessing of sight, and eagerly sought to satisfy my soul with long and earnest gazing on the beauty and grandeur of creation. After losing her sight, she had to rely on her hearing to experience life at the lighthouse.

At times, when in a listless mood, if the weather was pleasant, I would go out of doors and sit down in some spot where I could listen to any sound there might be to listen to. The usual sounds were the screaming of the sea gulls as they darted hither and thither, skimming the water in quest of food; the splashing of the wheels of a passing steamboat; the voices of the fishermen talking as they passed and repassed in their fishing boats, with now and then the spouting of a whale, for these great fish frequently make their appearance in the bay, often swimming along within a few yards of the shore. Sometimes the only sound to be heard was the lowing of the cattle, the bleating of sheep, or the barking of dogs on the neighbouring Island. That which pleased and interested me most was the singing of the sailors while getting their vessels underway preparatory to leaving the harbor, to the entrance of which the lighthouse is a faithful guide to the mariner by night in all seasons of the year. When a dozen or more sailors unite in singing, as they usually do when weighing anchor, their concert is well worth hearing.

In 1875, seven mammoth flat-wick lamps with 18-inch reflectors were being used in the lantern room, which was nine feet in diameter and contained glass panes measuring twenty by fifteen inches. The improvement to the light due to the use of the mammoth flat-wick lamps in lieu of the previously used half-inch flat-wick lamps was noted in a letter by E. B. Winchester, captain of the International Steamship Companys vessel New York, to John H. Harding, the Marine Agent in Saint John.

I have great pleasure in informing you that [due to] the increased number of lights, together with the very marked improvements which have been made by increasing the power of the old lights in the Bay of Fundy,  the mariner is now able to navigate the bay during thick and foggy weather with much less risk of life and property than previous to these valuable guides, which I find are well attended, and can be reckoned on with great safety. While on this subject, I would wish to call the attention of your prompt and energetic Minister to a want that has long been required and has been the subject of frequent discussion by the International Steamship Company, as well as mariners generally trading on the coast near the entrance of Passamaquoddy Bay, Viz.: the necessity of a steam fog-whistle at Head Harbour Light-house.

The fog-trumpet is found not to be sufficient in thick weather, when the wind is from the east-ward, and surf breaking on the shore. A steam-whistle of small power would answer the purpose, and be a guide to all the harbors adjacent in thick and foggy weather, also a warning of the approach to that dangerous coast.

In 1875, Gannet Rock Lighthouse received a new signal gun, and its old gun was shipped to Head Harbour, where a safer one was needed. Steps were taken in 1877 to establish a new steam-powered Neptune fog trumpet on the east side of the dwelling, and it commenced operation in October of that year. The horn, which cost $2,500, did not function satisfactorily, and it was discontinued the following year. A new trumpet of an improved description was put in operation on January 30, 1880, and Samuel Craig, engineer of the fog trumpet at La Tete Passage, was transferred to Head Harbour to serve as keeper of its light and engineer of its fog signal. Henry McLaughlin, who had been serving as keeper at Head Harbour, was transferred to the new Grand Harbour Lighthouse. The improved fog signal, which cost $6,199, sounded eight-second blasts separated by intervals of thirty-five seconds and was hailed as the loudest and best sounding fog-alarm in the Bay of Fundy. As the station now required two men to operate it, Angus Fisher was awarded a $1,100 contract in 1885 to construct a new dwelling for the fog alarm engineer.

In 1887, a new iron lantern room with large plate glass windows was installed atop the tower to house a third-order lens, and an addition was made to the engineers dwelling. The 1905 Annual Report of the Department of Marine noted that a fog bell, located eight feet northward of the lighthouse and which had previously been rung by hand, had been equipped with machinery that would deliver two strokes in quick succession every thirty seconds.

A new fog alarm building was constructed in 1915 and outfitted with a class-C diaphone fog signal.

Head Harbour Lighthouse was manned by Coast Guard personnel until 1986. In 1988, the original 1829 tower, the oldest surviving lighthouse in New Brunswick, received classified status from the Federal Heritage Building Review Office. The Friends of The Head Harbour Lightstation was formed in 2000 to preserve, protect, and promote the unique heritage of the lighthouse for the enjoyment and education of all. The groups hard work, dedication and enthusiasm are abundantly documented in their frequently updated photo gallery.

For a larger map of Head Harbour (East Quoddy) Lighthouse, click the lighthouse in the above map.

From Lubec, Maine take F.D.R Memorial Bridge onto Campobello Island, passing through the customs station, and follow NB 774 to the northern end of the island. After 4 km (2.5 miles), you will need to turn right to remain on NB 774, and from this point it is 11.5 km (7.2 miles) to the northern tip of the island. Note that access to the islet on which the lighthouse is located is only possible for a few hours at low tide.

The Friends of The Head Harbour Lightstation has guides hired during the summer (early June to late August) to collect a small fee for accessing the lighthouse and to make sure people do so only at the proper time. An additional fee is charged if you wish to tour the inside of the dwelling and tower.

The lighthouse is owned by The Friends of The Head Harbour Lightstation. Grounds open, tower closed.