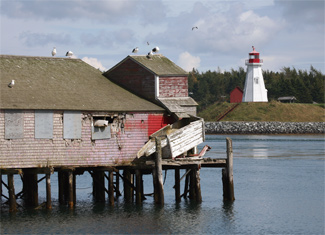 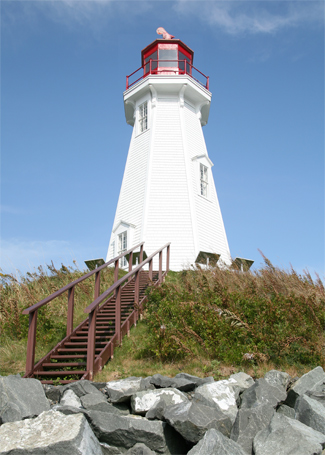 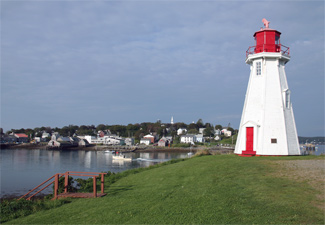 An appropriation was made by Parliament in 1882 for the construction of a lighthouse near the southern end of Campobello Island to guide vessels through Lubec Narrows, the small passage between the island and the United States mainland. After the exact site was selected and specifications prepared, tenders were invited for the work, and a contract for $790 was awarded to Angus Fisher of St. George in 1883.

Mulholland Point Lighthouse, a wooden octagonal tower standing forty-four feet from its base to the vane on its lantern, was completed in 1884, but its fixed white light was not exhibited until 1885. E. Chanteloup, a Montreal establishment that outfitted many Canadian lighthouses, supplied the lantern and lighting apparatus at a cost of $683.26, and Malachi Parker was hired as the first keeper of Mulholland Lighthouse. The towers light was shown from a height of sixty feet and was visible up to thirteen miles.

Around the time Mulholland Lighthouse was constructed, Campobello Island was becoming a popular summer colony for wealthy Canadians and Americans. Among these was James Roosevelt Sr., whose wife Sara Delano had a number of cousins living in Maine. The Roosevelt family made Campobello Island their summer home starting in 1883, and it was there that their son Franklin Delano Roosevelt, who became the thirty-second President of the United States, would spend his summers.

In 1903, Franklin brought his future wife Eleanor, whom he was courting at the time, to the familys summer cottage. After the couple married in 1905, they purchased the Kuhn Cottage to be their own retreat on Campobello Island.

Franklin D. Roosevelt served as Assistant Secretary of the Navy from 1913 to 1920, and during this period he made an inspection trip along the Maine coast aboard the U.S.S. Flusser. Taking the helm, the future President captained the vessel through the narrow channel between Lubec and Campobello Island, earning the respect of an initially concerned Lieutenant (later Admiral) William F. Bull Halsey. Admiral Halsey later wrote, As Mr. Roosevelt made his first turn, I saw him look aft and check the swing of our stern. My worries were over; he knew his business.

At his island cottage in 1921, Franklin fell ill with a paralytic illness, which resulted in total and permanent paralysis from his waist down. After suffering this infliction, Roosevelt did not return to Campobello Island until 1933, the year he began serving as President.

Eleanor returned to the island more frequently than her husband, bringing along their children and some close friends. She enjoyed the solitude found on Campobello, which had no telephones at the time, and even found solace in the fog that frequently shrouds the island in the summer months. Fog is nice if you know a place and are with someone you like, she wrote. It is like a winter storm. It shuts you in and gives you a close and intimate feeling and adds to the joy of your fire.

A few weeks before her passing in 1962, Eleanor Roosevelt made her last trip to Campobello Island to attend the dedication of the Franklin Delano Roosevelt Memorial Bridge that linked the island to the mainland. The navigational lights on the new bridge made Mulholland Lighthouse unnecessary, and it was decommissioned in 1963.

For a larger map of Mulholland Point Lighthouse, click the lighthouse in the above map.